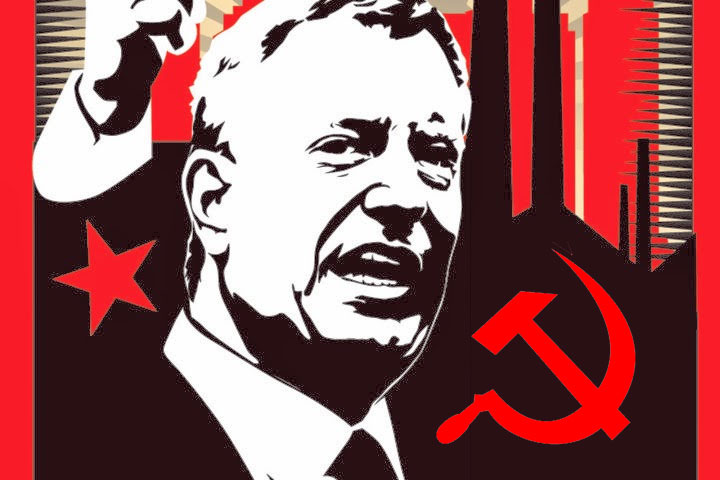 Red Bill de Blasio just unveiled a 13-point national “Progressive Agenda” that is being touted as the liberal “Contract with America.” It more closely resembles a “Contract for Communism.”

And a majority of Democrats wholeheartedly approve this as the basis for the “Progressive Agenda” – the bedrock for their primary economic policies and the running platform for their anointed 2016 presidential candidate. The mask is coming off… they are going full bore Marxist/Communist and are proud of it. Members of Congress are praising de Blasio for uniting Progressives.

Rev. Al Sharpton stated that the shared goals of Progressives are more important than each individual leader’s specific opinions – how very communist of the Reverend:

“We don’t agree on everything but we agree that we have to deal with income inequality and wages and how we get there,” he said. “We can’t debate that America has to be fair for everybody. We can’t debate that the billionaires are playing games with us and treating us like hamsters on a treadmill rather than people that are focused on the goal line. We will change the debate starting today.”

Comrade Sharpton waxes poetic for the communist agenda. Is anyone surprised that the weasel who is vocally advocating for the nationalization of our police forces stands on a communist perch worthy of Lenin?

De Blasio comparing this to the Republican Party’s 1994 “Contract with America” only holds up if you consider it the very antithesis to such a political platform. But it certainly does lay bare their wealth redistribution and class realignment goals.

Aaron Klein at WND has documented that most of the 13 points in de Blasio’s “Progressive Agenda” can also be found in the manifestos and literature of the Communist Party USA and the Socialist Party USA:

Here is a comparison of the Agenda’s plan with literature from the manifestos and writings of the Community Party USA, or CPUSA, and the Socialist Party USA, or SPUSA.

• Progressive Agenda: “Raise the federal minimum wage, so that it reaches $15/hour, while indexing it to inflation.”

SPUSA: “We call for a minimum wage of $15 per hour, indexed to the cost of living.”

CPUSA: Calls for “struggles for peace, equality for the racially and nationally oppressed, equality for women job creation programs, increased minimum wage. … Even with ultra-right control of the Federal government, peoples legislative victories, such as increasing the minimum wage, can be won on an issue-by-issue basis locally, statewide, and even nationally.”

SPUSA: “The Socialist Party stands for the right of all workers to organize, for worker control of industry through the democratic organization of the workplace.”

CPUSA: “One of the most crucial ways of increasing the strength and unity of the working class as a whole is organizing the unorganized. Working-class unity depends on uniting all the diverse sectors of the multiracial, multinational working class in the U.S. … Speeding up the organization of unorganized workers is one of the most important challenges to labor and all progressive forces.”

SPUSA: “We defend the rights of all immigrants to education, health care, and full civil and legal rights and call for an unconditional amnesty program for all undocumented people. We oppose the imposition of any fees on those receiving amnesty. We call for full citizenship rights upon demonstrating residency for six months.”

CPUSA: Declares the “struggle for immigrant rights is a key component of the struggle for working class unity in our country today.”

CPUSA: In October 2014, hails that “women are fighting back to defend their jobs and their families against candidates who want to destroy women’s reproductive rights, health care, family leave and paid sick days. Women’s voices and votes can make the difference in this election in the U.S. Senate and House, for Governors and State Legislatures, and in the movement going forward for full equality.”

SPUSA: “We support public child care starting from infancy, and public education starting at age three, with caregivers and teachers of young children receiving training, wages, and benefits comparable to that of teachers at every other level of the educational system.”

CPUSA: “No taxes for workers and low and middle income people; progressive taxation of the wealthy and private corporations. …”

Eerily similar, huh? Getting a little hot in our comrade’s kitchen – in fact, hot damn!

De Blasio considers Obama “too conservative” to implement a progressive economic vision and “too afraid to take the bold kind of action that President Roosevelt took” during the Great Depression. It is widely rumored that de Blasio is considering running for president in 2016. At the very least, his agenda for New York is very clear. No way would I live in New York these days – did you know 46% of the population there lives in poverty? Of course, de Blasio blames it all on the Bloomberg administration. Bloomberg deserves a lot of blame, but if he pulled the city into ghettosville, de Blasio is tripling down on it. He wants to raise the minimum wage to $15 an hour, just like Seattle. That was disastrous for Seattle by the way. And now LA has decided that they are copying this suicidal move. Looks like both coasts just can’t get enough Marxism going on. Both are racing to see who can go third-world first.

Speaking at the “Progressive Agenda” launch event, de Blasio said “something is changing in America.” Yeah and not for the better. “It’s time to take that energy and crystallize it into an agenda that will make a difference,” he said. “We’ll be calling on leaders and candidates to address these issues, to stiffen their backbones, to be clear and to champion these progressive policies.” It’s an all-you-can-eat Marxist buffet. In attendance were politicians, union leaders and of course, race monger, Al Sharpton. In other words, the who’s who of America’s communists.

The Hill quoted Rep. Charles Rangel, D-N.Y., saying de Blasio’s plan “could be the beginning of a revolution.”

Rep. Mark Pocan, D-Wis., commented the mayor’s plan represents “the meat on the bones of a progressive agenda.”

Either de Blasio is taking his communist agenda on the election trail, or he is trying to force the Hildebeast even further to the left. But honestly, it’s hard to see how she could go much further left these days.

The Atlantic reported the coalition supporting de Blasio’s plan includes Dan Cantor, executive director of the Working Families Party. Cantor was also a founder of the socialist-oriented New Party. Did you know de Blasio once served as executive director of the New York branch of the New Party? Trevor Loudon has done massive research on Obama, who was also listed in New Party literature as a member. WND did as well.

De Blasio’s plan is based on a plan crafted by a George Soros-connected professor. De Blasio’s “Progressive Agenda” was formed around a 112-page policy report at the liberal Roosevelt Institute titled, “Rewriting the Rules of the American Economy.” The author is Joseph Stiglitz… the Columbia University economist who was an integral part of Occupy Wall Street. De Blasio is a big fan, which should tell you all you need to know. Stiglitz wants more government regulation of the economy.

“Broadly speaking, Joe’s theoretical work has had to do with the shortcomings and imperfections of market economy, not from the standpoint of a thorough-going rejection of the market economy but from the perspective that holds out hope for improvement through government regulation or use of the tax system,” Wright said.

Stiglitz was a member of President Bill Clinton’s administration, serving both in Clinton’s cabinet and as chairman of the White House Council of Economic Advisers.

Stiglitz’s most important contribution during his time in the Clinton administration was helping to define a new economic philosophy called a “third way,” which called for business and government to join hands as “partners,” while recognizing government intervention could not always correct the limitations of markets.

“Third Way” is an ideology first promoted as an alternative to free markets by Mikhail Gorbachev after the collapse of the Soviet Union. The “Third Way” of governing would be neither capitalist nor communist, but something in between.

The “Third Way” calls for business and government to join hands as “partners.”

Discover the Networks criticized the theory: “In short, Big Business would own the economy (as under capitalism), while Big Government would run it (as under socialism). Corporations would be persuaded to comply with government directives through subsidies, tax breaks, customized legislation, and other special privileges.”

Soros himself has been a vocal proponent of the “Third Way” economic policy.

Stiglitz, meanwhile, also became involved in “global warming” issues, including serving on the Intergovernmental Panel on Climate Change, helping to draft a new law for toxic wastes and serving on the boards of numerous environmental groups, such as the Alliance for Climate Protection.

Stiglitz is calling for a “New Global Economic Order” in which the world is “no longer dominated by one ‘superpower.’”

So you see, the communist ideals are endemic to de Blasio and his “Contract with America.”

In closing, here is the Progressive Agenda he is pushing:

Lift the Floor for Working People »

There are many on the right pushing some of this crap too – especially Van Jones‘ ’empty the prisons’ mantra. This is a blueprint for solid communism – just say no to Red Bill de Blasio and his commie policies. His “Contract for Communism” is a road map to tyranny and the fall of the Republic.