The United States no longer has, as the Constitution designed, a government composed of executive, legislative and judicial branches, separate, but equal in power. 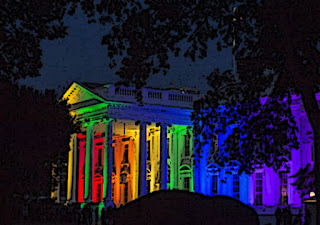 The federal government is now an alliance of branches, devoted to the preservation of government itself, separate, not from each other, but from the American people and dedicated to tyranny.

The policies pursued by the Obama Administration and facilitated by cowardly politicians and a compliant media are not simply the intersection of radical ideology and incompetence, but a dangerous subversive element of an anti-American and anti-Western strategy.

Cultural Marxism and its many variants, such as political correctness and multiculturalism, is now firmly ensconced in the White House and the Democrat Party, while the Republican Party, dominated by eunuchs and the avaricious, continuously accommodates its “principles” to match an ever-shifting leftward movement of the “conventional wisdom.” It does so solely in to maintain its place as the token opposition and grifter at the federal tax-revenue trough for the personal financial benefits that it provides.

After the successful 1917 communist revolution in Russia, it was widely believed that a proletarian revolt would sweep across Europe and, ultimately, North America. It did not.

As a result, the Communist International began to investigate other ways to create the state of societal hopelessness and alienation necessary as a prerequisite for socialist revolution – in essence, to destroy western democracy from within.

The single, most important organizational component of this conspiracy was a Communist think tank called the Institute for Social Research, popularly known as the Frankfurt School. The task of the Frankfurt School was first, to undermine the Judeo-Christian foundation of Western civilization that emphasized the uniqueness and sacredness of the individual and, second, to determine new cultural forms which would increase the disaffection of and division among the population.

Just as in classical economic Marxism, certain groups, i.e. workers and peasants, are a priori good, and other groups, i.e., the bourgeoisie and capital owners, are evil; in Cultural Marxism feminist women, racial and ethnic minorities and those who define themselves according to sexual orientation are deemed good and “victims” of societal injustice. Similarly, white males and “privilege” and, by extension, Western civilization, are automatically and irredeemably malevolent.

Sound familiar? It has been the playbook of the American left for over sixty years. The aim is not to solve social injustice or protect “rights, “of which the left can concoct an endless supply, but to undermine and topple Western democracy.

The new element in this formula, using the “enemy of my enemy is my friend” paradigm, is what David Horowitz described as an unholy alliance between leftists and radical Islam. They have been brought together by the traits they share – their hatred of Western civilization and their belief that the United States is the embodiment of evil on earth. While Islamic radicals seek to purge the world of heresies and of the infidels who practice them, leftist radicals seek to purge society’s collective “soul” of the vices allegedly spawned by capitalism — those being racism, sexism, imperialism, and greed.

That combination of these ultimately mutually exclusive, but temporarily useful, ideologies is arguably the modus operandi of Barack Hussein Obama and his inner circle with a larger cast of fellow travelers and useful idiots.

It is no surprise, then, that lying and secrecy have become the hallmarks of an administration immune both to facts and reason, plagued by contradictions and led by an individual with the impatience and petulance of an insecure adolescent from a political party with the emotional stability of a disgruntled postal worker.

Obama’s transformation is fundamentally the degradation and humbling of a great nation he considers venal and corrupt, but is, in reality, merely a description of the content of his own character.

He and his present anointed successor and Mini Me, Hillary Clinton, are manifestations of modern-day, totalitarian Liberalism, in its insatiable thirst for power, where persuasion is replaced by coercion to implement policies that are inherently damaging to liberty and the national interest.

Unfortunately, the federal government, as an institution, has largely come to reflect those same characteristics, the tyranny that led the Founding Fathers to declare independence.

In their effort to make the central government “too big to fail,” the political-media complex has made it too corrupt to reform.

Lawrence Sellin, Ph.D. is a retired colonel with 29 years of service in the US Army Reserve and a veteran of Afghanistan and Iraq. Colonel Sellin is the author of “Restoring the Republic: Arguments for a Second American Revolution “. He receives email at [email protected].