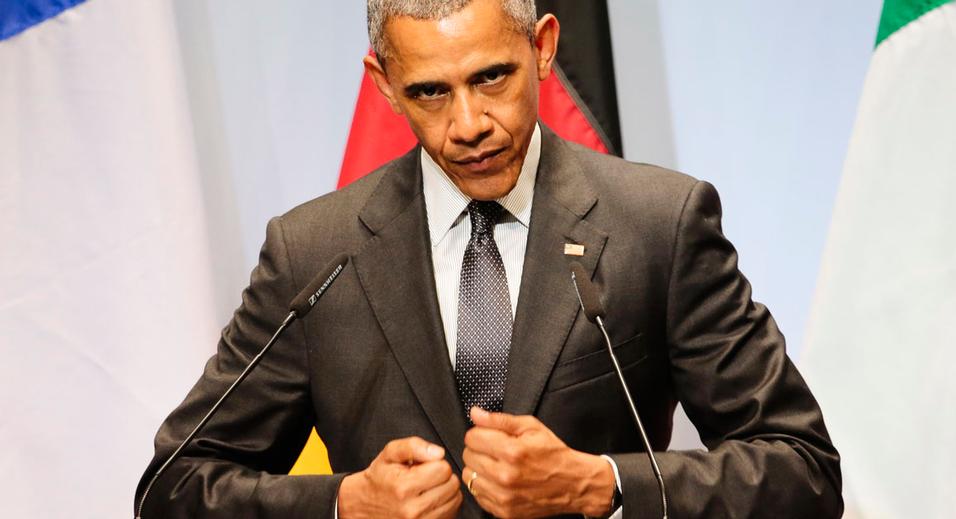 Obama is now making offers to debt-ridden municipalities that they dare not take. It’s like the devil offering you a way out and then collecting on that debt. Or, if you prefer, it’s like the mafia giving you money to solve your problems and then you owe them. Forever. The leaders in these areas won’t ask the residents and voters, they’ll let the silver cross their palms and will be blinded by the shininess of the coin they pocket. Corruption will finish selling free America down the proverbial river. I’ll be blunt… these municipalities should not be taking money from the feds. They should solve their problems at the local level, stand on their own and not be beholding to a governmental behemoth.

Under the guise of Obama’s Utopia, our president has been plotting for years the ultimate wealth redistribution here in America. It’s Marxist social and demographic engineering on a breathtaking scale. I believe this is the most insidious thing he has planned for us and it is a killer.

Obama believes the suburbs and wealthier neighborhoods are far too white. They are not racially diverse enough for his tastes. So, he is now going to municipalities that are sorely in need of funds and very much in debt up to their eyeballs, and offering them a way out. Say they are $5 or $10 million in the hole… well, the feds will give them $50 million. All they have to do is buy some land in an upscale area; sell it to a contractor that will build affordable housing and the government will take care of the rest. They will bring in minorities, the poor and disadvantaged… but even more importantly, liberal voters who will vote for Marxist policies. They will also resettle Islamic refugees and immigrants from across our southern border throughout these neighborhoods, leveling the demographic playing field into one huge ghetto from sea to shining sea. Just ask Sweden and the Netherlands how that has worked out for them, or Europe in general for that matter.

You see, Obama doesn’t give a flying crap about his legacy — at least as viewed by the culture as it is today — but rather, as written by the elites of a post-freedom neo-culture of Morlocks. He cares about the future of his Marxist Utopia and having the right people control, shape and manage it from here on out. That’s what this is all about. It’s everything we have feared wrapped into one slick move: Climate Change, Agenda 21, Common Core, a nationalized police force, the shredding of the Constitution, the loss of property rights, the persecution of Christians, the loss of free speech and gun rights, voter manipulation, illegal immigrant inundation, Islamic refugee resettlement, massive unemployment and poverty, laying the groundwork for Shariah law, neighborhood blight, societal decay, the spreading of violence and chaos and a race war… in other words – Cloward and Piven.

The regulations would use grant money as an incentive for communities to build affordable housing in more affluent areas while also taking steps to upgrade poorer areas with better schools, parks, libraries, grocery stores and transportation routes as part of a gentrification of those communities.

“HUD is working with communities across the country to fulfill the promise of equal opportunity for all,” a HUD spokeswoman said. “The proposed policy seeks to break down barriers to access to opportunity in communities supported by HUD funds.”

It’s a tough sell for some conservatives. Among them is Rep. Paul Gosar (R-Ariz.), who argued that the administration “shouldn’t be holding hostage grant monies aimed at community improvement based on its unrealistic utopian ideas of what every community should resemble.”

“American citizens and communities should be free to choose where they would like to live and not be subject to federal neighborhood engineering at the behest of an overreaching federal government,” said Gosar, who is leading an effort in the House to block the regulations.

Civil rights advocates, meanwhile, are praising the plan, arguing that it is needed to break through decades-old barriers that keep poor and minority families trapped in hardscrabble neighborhoods.

“We have a history of putting affordable housing in poor communities,” said Debby Goldberg, vice president at the National Fair Housing Alliance.

The Fair Housing Act of 1968 prohibited direct and intentional housing discrimination, such as a real estate agent not showing a home in a wealthy neighborhood to a black family or a bank not providing a loan based on someone’s race.

But HUD is looking to root out more subtle forms of discrimination that take shape in local government policies that unintentionally harm minority communities, known as “disparate impact.”

“This rule is not about forcing anyone to live anywhere they don’t want to,” said Margery Turner, senior vice president at the left-leaning Urban Institute. “It’s really about addressing long-standing practices that prevent people from living where they want to.”

Sounds so very fair, doesn’t it? ‘Gentrification’ is a lovely sounding word that loosely translates into ‘ghetto.’ It’s equal opportunity for all, alright… everyone in the end will be equally poor and starving; equally enslaved and equally downtrodden. Whatever happened to being free to succeed or fail? Free to live where you wanted? Free to keep what you have earned and built? This is the end-all of entitlements for the degraded out there. Without earning it or working for it, you too can live in an upscale neighborhood. If this succeeds, America will see violence as she has never seen it before. You won’t be able to just choose where you live and who you reside and associate with… oh, no. You’ll live in a small domicile, in fear for your life as well as your family’s. I’d say you’d be clutching a gun for protection, but even that will be taken from you. Think inner-city Chicago or Baltimore and then picture that being everywhere.

In the name of ferreting out one form of discrimination or another, Obama, the great equalizer, will make everyone equally impoverished. He will usher in America as a third-world nation on her knees. He has decided that upscale suburbs and McMansions must go and that other’s wealth needs to be shared with those who have no right to it. It is Marxism in all its evil glory.

Property values will plummet into non-existence if this is allowed and the blight you see in poor neighborhoods will be rampant. Wealth won’t be an issue anymore as only a very select few will have it. If that isn’t engineered tyranny, I don’t know what is.

The expression ‘eat the rich’ is a distasteful metaphor, but when the metaphor is the creation of an oozing blob of digestive protoplasm that slimes its way over and around the rich and simply digests them, is that somehow less distasteful? Somehow less fatal? In the end, it’s all digestion and all comes out the other end. The man who changed your healthcare system forever, is now going to change your neighborhood forever – a community organizer from hell run amok.

Stanley Kurtz, a senior fellow at the Ethics and Public Policy Center, has been screaming about the plan to transform American suburbia since 2012. And now, Obama’s wealth redistributionist policies are coming to fruition. This is about to be reality. 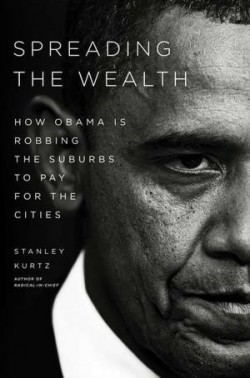 At least Arizona Republican Congressman Paul Gosar is trying to stop this – although in the end, I’m sure, Obama will find a way around any hurdles put in his way:

The Gosar amendment is endorsed by Americans for Limited Government, Freedom Works, Council for Citizens Against Government Waste, Taxpayers for Common Sense and Eagle Forum.

It now goes to the Senate, where the prospects for passage are good — but not guaranteed. Kurtz predicts that Obama’s power grab will likely become a major issue issue in the 2016 presidential campaign should Senate Republicans fail to block the AFFH.

Listen up folks… we better get our act together as conservatives. Obama’s move on this is all tied in with the Hillary Clinton campaign. She’s also behind a lot of this – just sheer evil plotting and manipulation from the most corrupt administration ever to disgrace America.

So-called Civil Rights leaders are cheering Obama’s move. These are the same people who are standing against the police and race hustling now every time some black youth is shot or killed by an officer in the line of duty. These are the same Progressives who want to do away with gun rights as well. Under the Affirmatively Furthering Fair Housing rules that Obama has concocted, societal boundaries will be torn down completely and America will become unrecognizable. HUD has morphed into one more Marxist tool being used against free society… another Philip Dru agency that is implementing communist ideals at the local level.

Megyn Kelly of Fox News is right. This is a radical, explosive game-changer. Obama is demanding that areas develop low-income housing or risk losing federal funds. It’s racial inclusion by sledgehammer. Since Obama cannot legally regulate neighborhoods and their diversity, he has resorted to bribery and blackmail. How very presidential.

Obama is preparing to mix it up in America permanently. He intends to level the demographic playing field once and for all with this move. A move, I might add, that has been facilitated from both sides of the political aisle. It is a move that is aimed at killing off the suburbs and herding Americans into the cities where they can be controlled. It is being done for cheap labor and political power.

Their goal? To increase the influence of America’s cities over their suburban neighbors so that even­tually suburban independence will vanish.

In the eyes of Obama’s former mentors—i.e., fol­lowers of leftist radical Saul Alinsky—suburbs are breeding grounds for bigotry and greed. The classic American dream of a house with a big yard and high-quality, locally controlled schools strikes them as selfishness, a waste of resources that should be redirected to the urban poor.

The regulatory groundwork laid so far is just a prelude to what’s to come: Substantial redistribution of tax dollars. Gradually cities would effectively swallow up their surround­ing municipalities, with merged school dis­tricts and forced redistribution of public spending working together to kill the appeal of the suburbs.

The result would be a profound transforma­tion of American society, Kurtz concludes.

This is the final push in Obama’s second term to socially and demographically engineer America. If Obama succeeds, this will forever change how we live and it won’t be pretty. I predict there will be a major backlash over this and it will figure heavily in the 2016 election. Americans simply will not willingly comply with being forced to live this way. Obama’s Utopian vision of America’s future is hellish and not American in the least.

Movie writers and book authors are fond of using the “Amerika” spelling to convey the conquest of the USA by some foreign interest of some shade of red. What’s afoot is more subtle. No clouds of paratroopers, no storm of missiles arcing overhead, no magical EMP wipe of our grid – not yet, anyway. Instead, a carefully farmed culture of militantly criminal and impoverished social commandos sweeps into downtown and suburban America, bringing a pestilence of thuggery and parasitic dependency to nullify any prosperity and initiative, leaving only a bleak, open-air gulag where all of the traditions and inspirations that engender liberty and independence are subordinated to the forces of submission. They won’t change the spelling. But “America” will thereafter only be a brand, a cheap movie set with a glitzy DC facade and the entire population as extras. But at least it will still be spelled “America.” 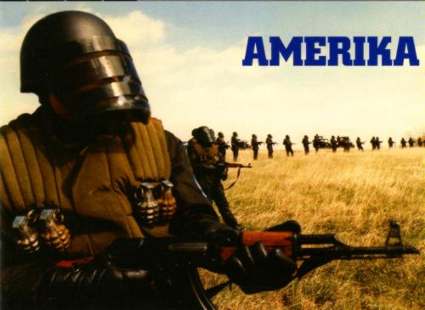