***NOTE: Megaphone Strategies is connected to George Soros and they are the firm representing the Hamilton Electors seeking to keep Donald Trump from the presidency. They are also the firm that handled Barack Obama’s campaigns and Hillary Clinton’s. They also represent Black Lives Matter. 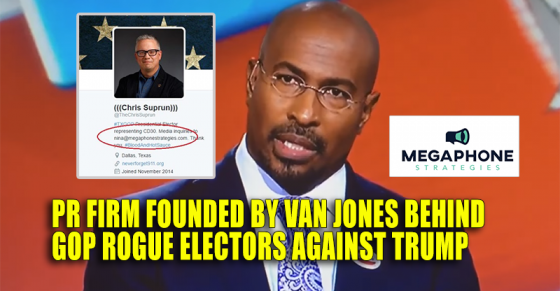 The firm touts itself as a “social justice media strategy firm run for purpose, not profit.” (Good luck with your efforts to circumvent human nature, Comrade Jones.) Molly Haigh, communications director for the Progressive Change Campaign Committee is his partner in this new adventure in antisocial activism.

Jones, who was President Obama’s green jobs czar until it was revealed that he was a 9/11 truther, will chair the organization’s board while Haigh will be president and oversee five staffers in the beginning.

Everywhere we look, we discover courageous people finding ways to break down barriers and solve tough problems. We need to hear their voices, and we need to elevate their work,” said Van Jones of the reason behind the firm’s creation, which will offer strategy, publicity, media training and event/social justice campaign planning services.

Jones, by the way, said Donald Trump’s speech on the closing day of the Republican National Convention makes him an American Hitler.

Although Trump’s speech was widely applauded in Republican circles, Jones called it a “schizophrenic psychopathic attempt to pull apart the Obama coalition,” like a moment “where there’s some big authoritarian movement, and some leader that’s rising up,” and “a disgrace.”

What do you expect from someone who hates everything America stands for?

What Jones said about Trump’s address probably isn’t anywhere near the worst garbage to have spewed from his mouth on CNN where he is a paid contributor. His commentary throughout the Republican National Convention in Cleveland last week was fairly uniformly malicious, ugly, and unfair.

Megaphone Strategies lists a majority of its clients as environmental and “social justice” organizations such as 350.org, Green For All, Democracy Fund, and Demand Progress. More here.

Going back to 2009, Van Jones called the Republicans ‘assholes’ before his audience at a time when he worked for the Obama White House.