Hillary Clinton is directly responsible for the humanitarian catastrophe unfolding in the Mediterranean Sea as the death toll of those who drowned fleeing her destabilized Libya approaches 2,500. 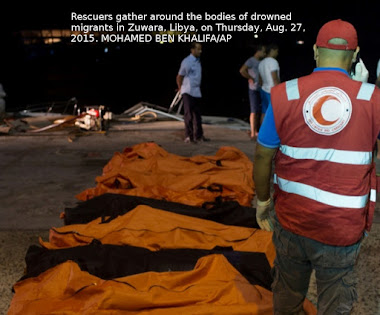 …The International Office of Migration has recorded 2,432 deaths linked to Mediterranean crossings this year, but countless more have vanished beneath the waves out of sight of rescuers. The official count was set to rise Friday as authorities counted the dead from three shipwrecks off the Libyan coast.

Two ships went down on Thursday alone off the western Libyan city of Zuwara. Hussein Asheini of Libya’s Red Crescent, said at least 105 bodies had been recovered, adding: “a coast guard team is still diving in and checking inside to see if there’s anyone else.”

Say, Doug, isn’t it unfair to pin these deaths on Hillary?

Well, let’s put it this way. Hillary was eager to take credit for destabilizing Libya when Muammar Gaddafi was executed in 2011: 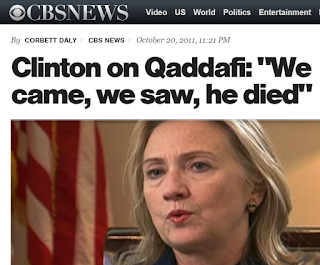 “We came, we saw, he died,” she joked when told of news reports of Qaddafi’s death by an aide in between formal interviews.

Clinton was in Tripoli earlier this week for talks with leaders of Libya’s National Transitional Council (NTC).

The reporter asked if Qaddafi’s death had anything to do with her surprise visit to show support for the Libyan people.

Now, as the mouthpiece of the Vast Right Wing Conspiracy known as The New Yorker reported earlier this month, Hillary’s masterwork has resulted in the rise of ISIS in Libya: 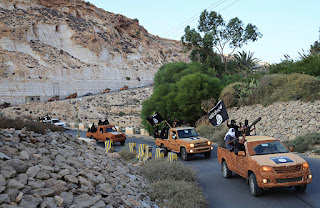 The wars in Syria and Iraq continue to dominate international headlines, but a growing stream of news offers reminders that Libya is in a state of meltdown. In Cairo on Sunday, John Kerry said he had discussed the need for “increased border cooperation” along Egypt’s long, mostly unguarded Libyan border. Tunisia has begun building a security wall along its own hundred-and-four-mile-long border with Libya.

For months, ISIS has been trumpeting its abduction and execution of African Christians in Libya. In February, a slick, ghoulish video showed twenty-one Egyptian hostages in orange jumpsuits being led along a beach by black-masked executioners, who forced them to kneel and then cut off their heads. In April, another video appeared, showing the execution of twenty-nine Ethiopians in Libya. Gunmen who trained with ISIS in Libya were involved in the murder of twenty foreign tourists, at a Tunis museum in March, and thirty-eight more tourists, most of them British, at a seaside resort in Tunisia in June. These attacks focused attention on the fact that Libya, a vast, oil-rich, underpopulated country with a long southern-Mediterranean coastline, has become part of the self-proclaimed ISIS caliphate.

In a parallel phenomenon, armed trafficking gangs in Libya are driving most of Africa’s illegal immigration across the Mediterranean to Europe. As many as a hundred and seventy thousand are thought to have made the crossing last year, with thousands dying en route. Unprecedented numbers are continuing to cross this year, taking advantage of the chaos in Libya.

Hillary’s email exploits are getting the headlines, and deservedly so for actions that would have sent a lesser mortal to prison long ago, but no one is discussing her complicity in crimes against humanity.

One other odd point: I don’t hear the word “chickenhawk” bandied about when these Democrat politicians bloviate about “their” military achievements. I wonder why that is?