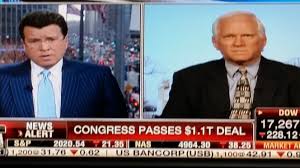 Accuracy in Media Editor Roger Aronoff was a guest on “Cavuto Coast to Coast” on September 30 on the Fox Business Network. The topic was the mainstream media’s double standard toward presidential candidates, and their willful pursuit of negative stories about Donald Trump while giving Hillary Clinton’s many scandals a pass.

Aronoff remarked on the show that he thought NBC anchor and recent debate moderator Lester Holt “got the message” from the mainstream media to go after Trump during the presidential debate. “If you watched the debate, he started out seemingly fairly innocuous and just trying to be down the middle,” said Aronoff. “But it turned into something where he went after Trump on several issues, and completely ignored Benghazi, the Clinton Foundation, the Clinton emails—all those things never got any kind of airing by Lester Holt.”

Aronoff called Hillary Clinton’s decision as secretary of state to send and receive classified information on an unsecured personal server a “national security scandal” and a disqualifier.

The media’s decision to treat Trump unfairly has been a consistent theme in recent months. “We had this article last month from Jim Rutenberg at The New York Times saying Trump poses such a unique potential danger as president that it’s okay to throw out journalistic standards,” said Aronoff. “Not that [these standards] really existed in recent elections, but that’s the argument.”

“But again, the standards have been thrown out for this one, and Trump is seen as so dangerous in their minds, that they don’t feel the standards are necessary, to try to be even appearing to be objective,” said Aronoff.

You can watch Aronoff’s recent appearance on “Cavuto Coast to Coast” here.

END_OF_DOCUMENT_TOKEN_TO_BE_REPLACED

Accuracy in Media Editor Roger Aronoff was a guest analyst on “Cavuto Coast to Coast” with host Neil Cavuto on the Fox Business Network twice this month. The topic the first time was the politicized news coverage in the wake of the San Bernardino, California terrorist attack that killed 14.

Before the facts were in, The New York Daily News ran the cover story that “God Isn’t Fixing This,” lambasting Republican presidential candidates for failing to connect that attack to gun control initiatives. The Daily News cast it as hypocritical for these candidates to say that their prayers were with the families of the victims.

“The headline maybe should be, ‘What new gun law might have prevented this?’” said Aronoff on Cavuto’s show.

He added that “It’s a human ex­pression of condolences to say, ‘My prayers are with you.’ President Obama said something very simi­lar: ‘Our heart goes out to the vic­tims and their families.’ That’s such a natural thing to say.”

“Clearly, [the San Bernardino attack] was an act of Islamic jihadism.”

The Daily News wasn’t the only mainstream media organization that raced to find its own convenient political explanation for the attacks. “MSNBC and Bloomberg put it in the context of a Planned Parenthood facility nearby, and they were immediately looking at that as a possible motive here,” said Aronoff, calling this attack “the essence of terrorism.”

“Look, anyone who’s now at their office Christmas party in any-town USA will be thinking about [this as a terror attack],” he said. “They’ll look a little more carefully at the people in the room with them, and wonder what they’re thinking.”