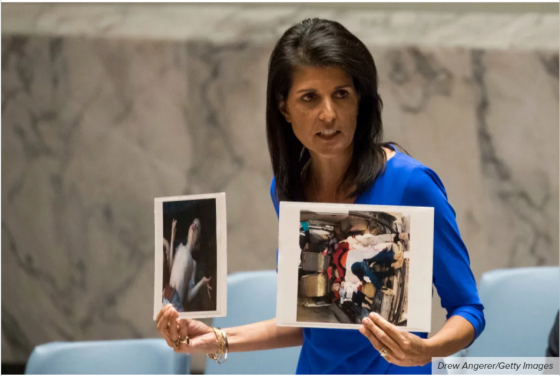 Nikki Haley received a surprise text at the United Nations. It allegedly said, “Thank you for what you said today. It’s so good to see America lead.” I’m not surprised she got that text. For all I know, that could have been Israel sending it, but it is indeed good to see actual leadership in America again. I know that many Trump supporters don’t agree with me. They claim we should not be the global police and should not interfere in other country’s affairs. I’ve got news for all of you… what happens globally affects America period. You may not want conflict or war, but other countries don’t give a damn about that. You may not believe in war, but it believes in us.

We have waited years for various gassing attacks in Syria to be investigated and for the United Nations to do something, anything and we are still waiting. I think that what President Trump did this week was the right thing to do and it sent not only Syria, but Russia, Iran, China and North Korea a strong message that there is a new sheriff in town and he doesn’t play with red lines and rhetoric. He’s deadly serious about stopping our enemies and have no doubt that Syria, Russia, Iran, China and North Korea are just that… American enemies. Grow up… this isn’t some theoretical reality where we can just turn our back on the world. This is real life and we have to stop these evil blackhats before they attack America. Hesitation is viewed as weakness and acquiescence.

“How many more children have to die before Russia cares?” she asked the Russian ambassador in front of the world.

Later that night, Haley made an appearance at the Women in the World Summit in New York City and revealed the text message she subsequently received from another member of the U.N. Security Council.

“Thank you for what you said today. It’s so good to see America lead,” the text reportedly read.

Haley insinuated that the message was meaningful to her because leading is exactly “what we’re trying to do.”

There is nothing that will move a heart like watching dozens of children… babies… die horrifically. Assad and the Russians could care less. Given the opportunity, they would use that tactic anywhere they land if it won them power, wealth, real estate and natural resources. Nikki Haley is right here. It is long past time we act like the world leaders we are. No nation building… but when tyrants kill the innocent and rage unabated and someone needs to step in, we have a moral obligation to do so. And we have a military presence that should show strength, not the cowardice the Obama administration mandated.

“The way you lead is to make sure they know what you’re for, they know what you’re against, and they never question where you are,” Haley added. Exactly right. You actually LEAD, you don’t vacillate. President Trump’s actions this week in response to a chemical attack by Assad against his own, shows a definitive shift in America military policy. And don’t say, “Well, it could have been the rebels!” No, it wasn’t. They would have no way of dispersing those chemical agents since they don’t have planes and Assad and Russia always blame these actions on their victims. It’s right out of their playbooks.

Our allies are cheering the action and breathing a huge sigh of relief. Our enemies are calling it an act of aggression. It’s an act as old as time. But President Trump is no ‘lead from behind’ president as Barack Obama was. Peace through strength has once again taken center stage. 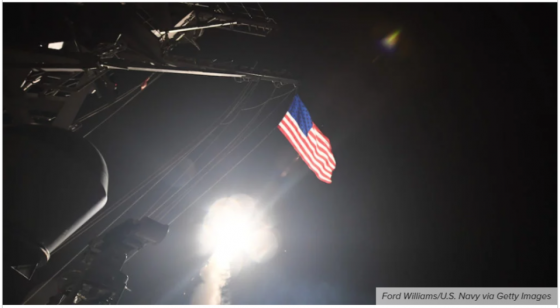 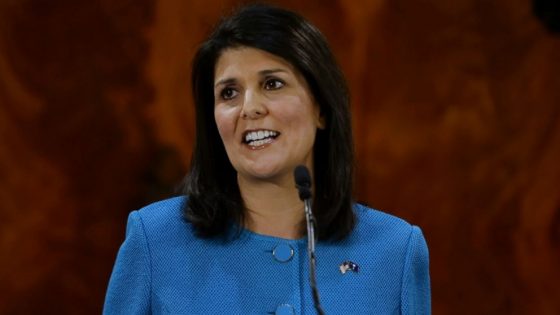 Nikki Haley surprised the heck out of me when she called Russia on the carpet at the United Nations over a monstrous chemical weapons attack allegedly carried out by Assad in Syria. “How many more children have to die before Russia cares?” Haley asked, her eyes locked on the Russian ambassador. And that is the rub of the matter. Of course, Russia claims it was the rebels fault… that they stockpiled the weapons and when Assad blew up their warehouse, they were dispersed. You can’t trust anything the Russians say and I believe that is a monstrous lie.

We are very, very close to war now on multiple fronts. I actually think that we either need to have a trained Black Ops team take out that troll in North Korea, or we need to preemptively strike the Hermit Kingdom. We are now out of options. As for Syria, if we decide to go to war there, realize that we will not just be at war with Assad. We will be at war with Russia, China and Iran as well. Hello World War III. I have warned about this for years and we have finally arrived at the Eve of Destruction.

United States Ambassador to the United Nations Nikki Haley stared down her Russian counterpart in a fiery speech at the U.N. Security Council Wednesday, criticizing Russia for its continuing defense of the Syrian government following a suspected chemical weapons attack.

Haley held up photos of child victims as she recited eyewitness accounts of the attack on the rebel-held town of Khan Shaykhun in Syria’s Idlib province on Tuesday.

“Men, women, the elderly and children gasping for their very last breath,” she told the Security Council. “And as first-responders, doctors and nurses rushed to help the victims, a second round of bombs rained down. They died in the same slow, horrendous manner as the civilians they were trying to save.”

“How many more children have to die before Russia cares?” Haley asked, her eyes locked on the Russian ambassador.

After Syria attack, US Ambassador to UN Nikki Haley asks, "How many more children have to die before Russia cares?" https://t.co/lEfKhI1EWz

Russia’s defense ministry argued that fault for the chemical weapon attack lies with Syrian rebels who oppose President Bashar al-Assad’s government. They said that a rebel-held warehouse producing and storing chemical weapons was destroyed during the bombardment by the Syrian Air Force, causing the release of the chemical agents that took the lives of over 100.

Nikki Haley is a pit bull. She’s tenacious and she stood toe to toe with her Russian counterpart over this and didn’t back down. She didn’t even flinch. I’m impressed. Even President Trump, who had been against doing anything in Syria, has had a change of heart. After you see what was done to children there, first you are shocked… then tears come to your eyes… then you get righteously angry. The games with Russia are about to end.

Death was not quick or easy for these people. It was a slow, agonizing monstrous way to die. Only a brutal tyrant could condone such a thing. Russia used the warehouse excuse to block a strongish Security Council response to the attack, a move that earned the country near-universal condemnation. “Time and time again Russia uses the same false narrative to deflect attention from their allies in Damascus,” Haley said during her speech. “The United States sees yesterday’s attack as a disgrace at the highest level and assurance that humanity means nothing to the Syrian government.” And that has been the brash truth all along.

Nikki Haley closed her speech with: “When the United Nations consistently fails in its duty to act collectively, there are times in the life of states that we are compelled to take our own action,” she said. “For the sake of the victims, I hope the rest of the Council is finally willing to do the same.” In other words, just as President Trump says that if China will not stop North Korea, we will… if the UN will not act on Syria, America will. See where this is going?

The “unacceptable” chemical weapons attack “crosses many lines, beyond a red line, many, many lines,” Trump said during a joint press conference on Wednesday with King Abdullah of Jordan. “I will tell you that it has already happened, that my attitude toward Syria and Assad has changed very much.” The drums of war are deafening now. America, are you ready?