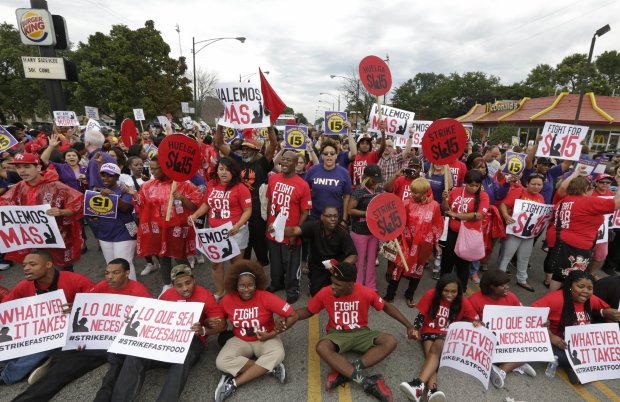 Protesters participate in a display of civil disobedience as labor organizers escalate their campaign to unionize the industry’s workers. (AP Photo/M. Spencer Green)

With the addition of Ecuador and the Philippines as signatories to “memorandums of understanding,” the National Labor Relations Board (NLRB) – effectively acting on behalf of the US federal government – has agreed to engage three foreign countries in international outreach programs designed to teach immigrants how to participate in labor organizing in the United States. Ecuador and the Philippines join Mexico as signatories to the memorandums. The agreements – which do not distinguish between those who have entered the US legally and those who have not, present several questions, including those of jurisdiction, treaty making and purpose.

The NLRB, by charter, is an independent agency of the United States government. Its members are all appointed by the President of the United States with the consent of the US Senate. It is divided into two authoritative entities: the General Counsel and the Board. The General Counsel is tasked with investigating and prosecuting unfair labor practice claims; the Board is the adjudicative body that rules on the cases brought to it.

The NLRB’s authority is legislatively limited to private sector employees (excluding governmental, railroad and airline employees covered by the Adamson Railway Labor Act, and agricultural employees) and the US Postal Service. Yet over the years, many court decisions have allowed for the board’s jurisdictional standards to become so low that almost all employers whose businesses have any appreciable impact on interstate commerce have been absorbed into the its purview, rightly or not.

Additionally, the basic functions of the NLRB are meant to be centered on non-partisan arbitration and enforcement. Nowhere in the board’s legislated authority is there a proviso to advance the causes of either employers or organized labor, let alone a provision that grants them the power to teach labor organization to any demographic or faction, nationally or internationally; legally or illegally present in the United States. By entering into an agreement to provide instruction on labor organization, the NLRB has not only abdicated its mandate to be non-partisan, it has demonstrated a decided bias supporting organized labor.

“Policymaking today, in many areas of national concern such as the environment, health care, and financial regulation, is done primarily by agencies within the bureaucracy to which Congress has delegated broad swaths of legislative authority. Recent battles ranging from rules for greenhouse gas emissions to benefits that must be covered by private health insurance plans have been fought not primarily in Congress, but in or against administrative agencies that are exercising the power given to them by Congress.”