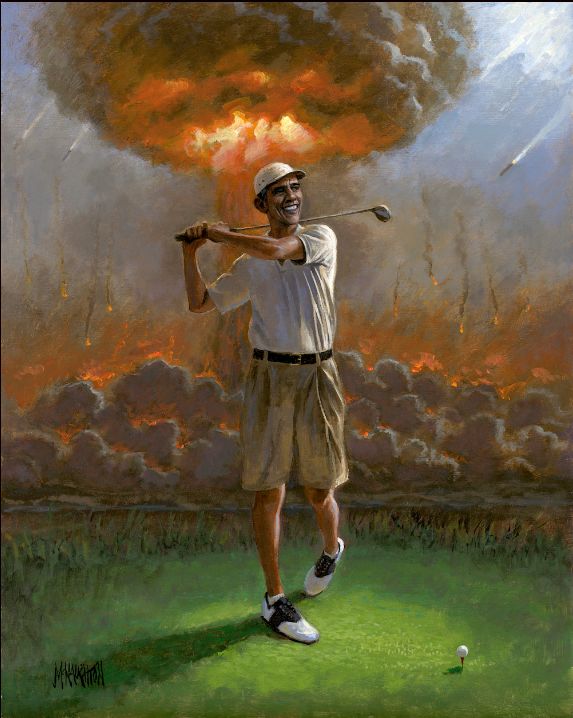 Obama’s Betrayal of America: Stating, and now Proving, the Obvious

Think about your own vision for what happens to America – to our children/grandchildren:

Obama is favoring the Shia in Iran to hold back the Sunni-ISIS in Iraq.

He is OK with Iran having nukes and he knows that the Saudis can get nukes from Pakistan.

I believe that Obama/Putin/China want the threat of nuclear chaos in the Middle East to bubble over to a potential terrorist nuclear attack here; that combined with the spectacle of American cities on fire via anti-Cop jihad will bring the US to its knees with a declaration of martial law and suspension of the Constitution – an important milestone.

The resolution of hostilities and the threat of greater chaos here lead to a UN resolution and national referendum that it is OK to drop the Constitution indefinitely. We will need a strong leader to quell the chaos and align us with the governance of the UN.

Russia/China/Nuclear-Islam will call the shots and we will essentially become a colony of the UN with enclaves of people living in fear of each other needing the national police force to keep order and control. Third world enclaves will expand exponentially with open borders and unrestricted UN-driven refugee resettlement.

Our natural resources will be administered by the UN and China will begin to be paid back for our debt with our oil, coal, land, etc. Russia will get access to resources in Alaska and the Arctic. Islam will have growing enclaves within America plus much of the Caliphate secured in Africa, Asia, the Middle East and countless enclaves in Western Europe. Russia expands into Eastern Europe and South America. China gets much of the Pacific.

We are enslaved within a colony which was once free.

Comments from a friend: “Total police control. Spying on people. People get money by computer credits that can be removed based on a crime or bad behavior. Or just not going with the project/program.”

What’s in your crystal ball?