Another submission by our summer intern, @BiffSpackle. 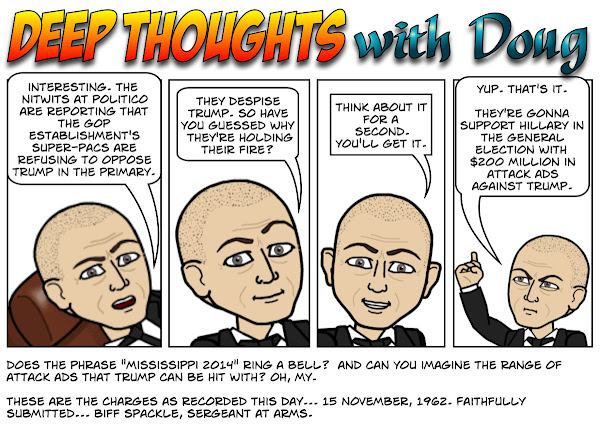 If I were a Democrat consultant, I would be licking my chops at the attack ads I could create against Trump. War on women, on Mexicans, against private landowners, against the little guys he’s screwed in business repeatedly.

Related reading: “Mega-donors shy away from fight with Trump.” Ongoing rivalries and dissension among Clinton loyalists have percolated up through the mainstream media, even The New York Times—whose own investigative reporting may have set off the latest salvo. It seems despite the president-in-waiting status often accorded to Mrs. Clinton, there might not be enough money to go around, evoking harsh internal criticisms.

David Brock, founder of the far-left Media Matters, “is a cancer,” argued John Morgan, a Florida lawyer connected to both President Barack Obama and former President Bill Clinton, according to recent reporting by Nicholas Confessore and Amy Chozick at the Times. Brock made headlines earlier this week, when in response to their reporting, he sent out a letter that alleged “current and former Priorities officials were behind this specious and malicious attack on the integrity of these critical organizations” and “resigned from the board of the super PAC Priorities USA Action,” according to Politico’s Kenneth Vogel.

Brock is considering a return to Priorities USA, The Washington Post noted shortly thereafter. “People are starting to worry that Priorities could be a weak link,” one strategist told Vogel for his February 10 story about how this super PAC is “struggling in its early efforts to line up cash toward a fundraising goal of as much as $500 million.”

But one wonders whether the criticisms expressed in the media will sabotage Brock’s and other loyalists’ peacemaking. “If you care about your party and our country, you just do what you are asked,” said Morgan, according to Confessore and Chozick. “If you care about yourself, you take your toys and go home.” Morgan is apparently “close” to the co-chair of Priorities USA Action, Jim Messina. Messina served as President Obama’s campaign manager in 2012.

Confessore, a liberal writer/editor transplanted from Washington Monthly to The New York Times, seems to have access to a considerable circle of influential Democrats connected to the Clintons. After all, he sat down with John Podesta in 2003 and 2005. And his August 2013 exposé on mismanagement at the Clinton Foundation, co-authored with Chozick, included interviews with “more than two dozen former and current foundation employees, donors and advisers to the family”—most unwilling to speak on the record.

Like the 2013 piece, Confessore and Chozick report for the Times on February 10 that “most people interviewed for this article declined to speak on the record for fear of angering either the president or the woman who hopes to replace him.” But these persons are willing to speak to the Times about their frustrations.

“The Hillary people were more in it for themselves,” said Jonathan Alter, MSNBC political analyst, when he appeared on the February 10 Ed Schultz show on MSNBC. Alter was referring to the 2008 Democratic primary campaign against Obama. “If we get a repeat of that this time, she won`t have the passion and a genuine commitment that she needs to go the distance.”

“…what this is about is that is that there was a fundraiser who raised millions of dollars for these different groups including David Brock`s, but she was taking a 12.5 percent commission,” Alter said. Democratic strategist Bob Shrum described Mary Pat Bonner’s reported 12.5% commission as “way over the top.”

Confessore and Chozick cast this Democrat infighting differently. They describe the latest meltdown among Clinton movers and shakers as a conflict between two worlds: former Obama staffers who have been imported as strategists for Clinton, and long-time Clinton loyalists. But these writers aren’t the only ones with conflicted interests. The reality appears to be that many in the liberal media, including some reporters at The Washington Post and New York Times, want to tear Hillary and the Clintons down for being too close to Wall Street. But on the other hand, they realize that Mrs. Clinton is the overwhelming favorite to get the Democratic nomination, meaning they will undoubtedly support her when it comes down to her vying against any Republican candidate.

As I’ve reported in the past, The Washington Post—even amidst Mrs. Clinton’s “worst week in Washington” and her tone-deaf comments about being “dead broke” after leaving the White House—still gave her favorable coverage in order to ensure that a Democrat would retain the presidency. “The Post has issued wall-to-wall coverage of this subject, but most of it is about ensuring Hillary’s chances,” I wrote last July.

But when Senator Elizabeth Warren (D-MA) launched her populist offensive in the Senate, hope sprang anew among die-hard liberals and some in the media that Mrs. Clinton, with all her baggage, might not be a shoo-in. The Post’s Paul Kane practically salivated over Sen. Warren’s presidential chances back during the December revolt. Sen. Warren has said she’s not running, but the Post continues to run articles like this: “Democrats suffering from Clinton fatigue say they’re ready for Warren.” Chozick recently described Sen. Warren as “an effective tool in moving Mrs. Clinton off message” whom Republicans favor as a candidate to create dissension within the Democratic primary.

Accuracy in Media has argued in the past that the Times’ David Kirkpatrick piece on Benghazi was a way of inoculating Mrs. Clinton while trying to make the definitive case supporting the Obama administration’s actions and justifications for Benghazi. But that obviously didn’t work, and revelations confirming the Citizens’ Commission on Benghazi’s conclusions continue to break, implicating Mrs. Clinton not only for poor security preceding the 2012 Benghazi attacks, but her blind push to intervene in Libya in the first place. When Mrs. Clinton most likely appears before the Select Committee on Benghazi, an even greater spotlight will shine on her role in these attacks.

It looks like Senator Bernie Sanders (I-VT) is very tempted to run against Mrs. Clinton from the left, and former Virginia Senator James Webb might run more or less from her right. The sharks are circling this establishment candidate; will Mrs. Clinton successfully fend them off?

And clearly others at the Times aren’t so interested in inoculating her. But in the meantime, the left is having a catfight, and it may be that some reporters are interested in stirring the pot for dramatic effect—and to cause some angst for Mrs. Clinton from their end.

Confessore’s bio from the Times states that he covers the “intersection of money, power and influence.” A visit to his Twitter page reveals that he, like many liberals, doesn’t like the Citizens United ruling very much.  His twitter feed recently stated, “Thanks to Citizens United, we can now have campaign infighting without the campaign.” He also has tweeted about the Clinton Foundation’s $81 million received from “clients of HSBC’s controversial Swiss bank.”

He also wrote an article with Chozick in July of last year which stated, “Few political families are closer to Wall Street than the Clintons … And the Clintons often interact with the titans of finance on the Manhattan charity circuit and during their vacations in the Hamptons.”

Could it be that at least one New York Times staffer doesn’t favor Mrs. Clinton for her entrenched, big-money establishment ties much, either? Or perhaps it’s just that Confessore, Chozick, and the Times itself want to go around poking sleeping tigers before an election to see what they can stir up.

These aren’t Mrs. Clinton’s only problems. She also has what might become known as a “Brian Williams problem,” meaning she “misremembered” coming under sniper fire on a runway in Bosnia, and she repeated the story on more than one occasion, yet there were plenty of eyewitnesses who knew it was a complete fabrication. It cost Williams his esteemed position, and a lot of money. Will Hillary pay a similar price?

Plus, former President Bill Clinton is becoming a problem again based on his being linked in the media to a sex scandal involving a good friend of his who is a convicted pedophile. It’s certainly never dull when the Clintons are involved.