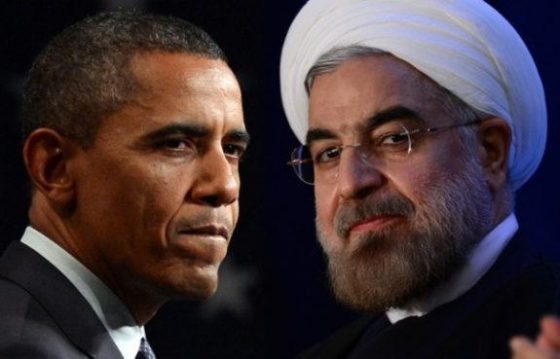 No matter how false and misleading it is to cite the Iran deal as “signed,” when it is little more than a set of unenforceable political commitments, the news media continue to publish fake news arguing that somehow Iran and the P5+1 have agreed on a single text of the deal. In reality, the Iranian parliament endorsed a different version of the deal than was supposedly accepted by the P5+1, and the JCPOA was agreed upon without signatures or signatories.

Now President Obama is using a news organ of the U.S. government, RadioFreeEurope/RadioLiberty, to sell the narrative that this is a signed deal. “Rohani has been accused of overhyping the agreement and being duped by Washington and five other world powers at the negotiating table,” reports Frud Bezhan for RadioLiberty. “In many ways, it mirrors the situation in the United States, where supporters have fended off consistent opposition to the Joint Comprehensive Plan Of Action (JCPOA), in which Tehran agreed to curtail its nuclear program in exchange for sanctions relief, since it was signed in July 2015” (emphasis added). In other words, American critics should stop complaining because the Iranians don’t believe the deal benefited them either.

How can the author of that article not know that the Iran deal was not actually signed? It was the State Department’s Julia Frifield who sent a letter to Rep. Mike Pompeo (R-KS) saying that the Iran deal is “not a treaty or an executive agreement, and is not a signed document.” Rather, she wrote, this deal represents “political commitments” between Iran and other nations. How, exactly, can policymakers politically commit to something that the parties have not agreed on in writing, validated by signatures? There is no such document, and this news article is little more than government-funded propaganda.

Even The New York Times admits that the parties had to parse out different interpretations when it reported in January of last year that Iran and the United States had not yet agreed on “details of what kind of ‘advanced centrifuges’ Iran will be able to develop nearly a decade from now.” This, the Times stated, was “the kind of definitional difference that can undermine an accord”—yet these details were being worked out months later than when the agreement was supposedly signed.

“But as the first anniversary of implementation day approaches on January 16, Rohani has been saddled by the high expectations he set, as Iran’s economy continues to struggle and the great boost in foreign investment and other benefits he envisioned has so far failed to materialize,” reports RadioLiberty. There are a number of different landmarks in how the Iran Deal is supposed to be implemented, which allows the Obama administration to acknowledge multiple anniversaries of the deal.

For example, the White House celebrated July 14, 2016 as the first year anniversary of this unsigned deal. “Today marks one year since the conclusion of the Iran nuclear deal…by representatives of the United States, Iran, France, the United Kingdom, Germany, China, Russia, and the European Union,” read President Obama’s statement. “Over the last year, the Iran Deal has succeeded in rolling back Iran’s nuclear program, avoiding further conflict and making us safer.”

But there are multiple anniversaries that the administration, as well as the compliant press, can use to their political advantage, highlighting Obama’s signature foreign policy achievement. After all, there is the day of the agreement (July 14, 2015), Adoption Day (October 18, 2015), and Implementation Day (January 16, 2016). The Hill, in particular, published a news story on the anniversary this week which exclusively cites President Obama, and no other sources. In other words, this January anniversary is yet another chance for the mainstream media to produce more propaganda in favor of the unsigned and unenforceable deal.

“Today marks the one-year anniversary of the implementation of the Joint Comprehensive Plan of Action (JCPOA)—a deal that has achieved significant, concrete results in making the United States and the world a safer place,” reads President Obama’s statement this week. The Washington Times reports that Obama used the one-year anniversary to warn “Americans—chief among them President-elect Donald Trump—that unraveling the agreement would bring ‘much worse’ consequences.” In other words, Obama is willing to lie to the public about the contents of the deal in order to salvage his foreign policy legacy from Trump’s future actions.

Obama is on the same page with Iranian President Hassan Rohani, who had harsh words for President-elect Trump. On Tuesday, Rohani said that talk of renegotiating the deal was “meaningless,” and that he “doesn’t think [Trump] can do much when he gets to the White House.”

Trump has nominated Rep. Pompeo to head the Central Intelligence Agency. Pompeo, in response to the letter he received from the State Department, said that the deal was “nothing more than a press release and just about as enforceable.” Yet Obama continues to claim, again and again, that the Iran Deal will make the world safer. The opposite is true: Iran, under this deal, has been given a pathway to develop nuclear weapons.

I recently asked Rep. Eliot Engel (D-NY), the ranking member of the House Committee on Foreign Affairs and a great friend of Israel, how this is a deal if it’s not signed. He said that “theoretically it wasn’t signed, but it was agreed to.” Theoretically? He said that it was a matter of semantics. “It was a bad deal,” he told me. “It doesn’t matter whether it was signed or not, it was a bad deal.”

Perhaps there is another anniversary that Obama should be celebrating—coordinating ransom money to the Iranians. According to The Wall Street Journal, “The U.S. Treasury Department wired the money [$1.7 billion] to Iran around the same time its theocratic government allowed three American prisoners to fly out of Tehran….The announcements coincided with the implementation of the nuclear agreement with Iran, lifting international economic sanctions in exchange for Iran curtailing its nuclear program.” President Obama claimed that this wasn’t a ransom payment—but the proximity to the release of U.S. prisoners demonstrates that this was, in fact, nothing short of buying off the Iranians.

If Obama wishes to celebrate, and the media continue to applaud, the anniversary of this terrible, unsigned agreement, then both parties must take ownership of how the ransom money sent to Iran—and sanctions relief—emboldens this totalitarian, theocratic regime.

Obama continues to appease the Iranians, opposing Congress’ recently renewed Iran Sanctions Act. The Wall Street Journal reported that Obama “decided to let the legislation imposing U.S. restrictions on Iran’s missile program become law without his signature” and that the law had overwhelming bipartisan support from Congress. In fact, the vote in the Senate was 99-0. In response, Rohani “ordered the development of a nuclear-powered system for ships, a move described as retaliation for the sanctions extension,” yet Obama’s press secretary, Josh Earnest, claimed that “Iran’s decision does not violate the nuclear deal.”

What, exactly, would violate this unsigned, unenforceable agreement? The fact that the parties have not signed this agreement, and that Iran has a different conception of the deal, means that Iran’s belligerence, and the deceit from both Iran and the Obama administration, amounts to a very challenging mess for the incoming Trump administration. Will the “art of the deal” prevail, or is a military confrontation inevitable?