Veteran conservative journalist Fred Barnes has written a disturbing Wall Street Journal article about how the campaign of Donald Trump, sparked by talk radio, is dividing and weakening the Republican Party—thus guaranteeing a Democratic Party win in November. Barnes points out in the article, entitled, “Republicans Are Campaigning to Lose,” that a significant number of Republicans will not vote for Trump if he becomes the GOP presidential nominee.

“The Republican rift will not be healed and disunity will reign,” Barnes predicts. “It’s highly likely that a sizable chunk of the Republican establishment will decline to back Mr. Trump in a repeat of 1964 when liberal and moderate Republicans refused to support Barry Goldwater.”

What’s fascinating about his piece is that Barnes discusses the forces in talk radio that opened the door for Trump to take control of the GOP presidential race. He writes, “The split between party leaders and a substantial number of party voters emerged after Republicans won the House in the 2010 midterm election, and swelled when they added the Senate in 2014. Their legislative gains were minimal. The Republican base, egged on by conservative talk radio, accused congressional leaders of knuckling under to President Obama.”

END_OF_DOCUMENT_TOKEN_TO_BE_REPLACED 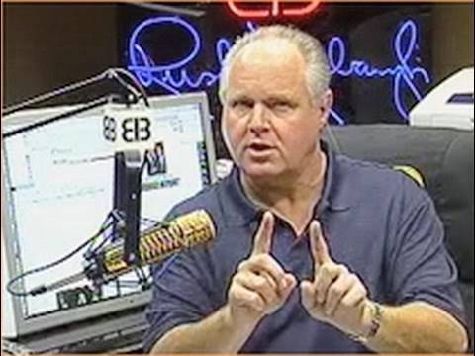 I caught a prominent TV preacher whom I respect accusing conservative talk radio of being too negative. He specifically criticized Rush Limbaugh. He said Rush finds the negative perspective in every news story. The preacher said God is in control and we must cast all our cares upon Him.

While as a Christian I believe God has everything under control, Christians are called to make a difference; to be salt. As a conservative writer, I struggle with this issue of always reporting bad news. At times, I feel like the last thing people want to read is another article about how Obama and his army of leftists are warring against America.

But something inside me says someone must inform the people. Hosea 4:6 says, “My people are destroyed for lack of knowledge.” All average American Joe knows is he is working harder, but bringing home less. http://bit.ly/1LX8lgP His wife notices a gallon of bleach cost a buck not long ago, now costs 3 bucks. http://bit.ly/1XtuXt2 Joe’s kids are calling him an extremest for owning guns. http://bit.ly/1ORCQY2 Other signs say things are not right. Average Joe doesn’t know why.

My calling and passion is to write in a way that every day American Joes who are not paying close attention will understand what is going on. And yes, sometimes the facts are extremely negative. I always pray for God to give me wisdom regarding how to add a little sugar to the bitter medicine; leaving patriots hopeful and inspired to continue fighting Leftists’ evil.

Years ago, conservatives lost another political battle. Depressed, I wrote an article about it. A publisher emailed saying he would not publish my article. It was too negative. I later thanked him. God has placed me in a role of leadership. The Bible says to whom much is given, much is required. Thus, I am not allowed to be depressed or at least state it publicly. Still, from time to time I must be reminded that God is in control. Patriots, our job is to stay faithful to our mission of restoring America no matter how many skirmishes we lose. And most of all, trust God.

As for the TV preacher criticizing Rush and other conservative talk radio hosts for always pointing out the negative, I think they should be applauded for providing a crucial service. The mainstream media lies to us every day. They are in cahoots with Obama, Democrats and other Leftists to deceive the American people at every turn.

And make no mistake about it. Everything the MSM reports and the Left does is intended to deceive Americans for the purpose of furthering their socialist/progressive, far left radial, anti-God and anti-American agenda. It is inescapable. The relentless furthering of the Left’s agenda is everywhere. Even where you least expect it; in cooking TV shows, home and garden TV and pro sports, the Left pushes its agenda in our face. Given time, the Left will figure out a way to interject homosexuality into lawn care. Thank God we have courageous voices over the airways sounding the alarm and telling the truth.

From time to time, Rush babies (young adults who grew up hearing Rush via their parents), call into his radio program to thank Rush for teaching them how to spot MSM liberal spin. The Left appears to own millennials.

Both mom and dad have to work for families to survive. Parents are not keeping a close watch on school boards the way they did when I was a child. Leftists dominate public education. They have had free reign to mold and shape our kids. Youths are taught that anything less than full embrace/approval of homosexuality is bullying and bigotry. Fairness and social justice means not holding blacks accountable for anything including bad behavior. We cannot sit back and allow the Left’s imposed new norms to go unchallenged.

I have been frustrated with the Christian community for some time now. Obama is an anti-American zealot in the driver’s seat of a monster tractor tiller stretching from our Canadian border to the tip of Florida. It has massive sharp blades. He is steamrolling across America grinding up every tradition, institution, conservative principle and value in his sight.

And yet, preachers instruct their congregations not to criticize or be negative – be more tolerant in the name of love. Meanwhile, Leftists are jailing Christians for not accepting what God describes as a perversion of His concept of marriage. http://bit.ly/207eVay In response to SCOTUS making homosexual marriage law, a prominent preacher said, “Don’t over react, it’s just the world acting like the world.”

Recently, I was reminded that Jesus turned over the tables and drove the evil money lenders out of the temple using a whip. This kind of blows the whole passive Christian thing out of the water. No, I am not suggesting violence in any way, shape or form. I am merely saying Christians must stand up and fight evil Leftists in responsible legal ways. Show up at school board meetings to protest new liberal indoctrination initiatives. Fight the Left with your pocket books. As much as she hates their liberal politics, my wife is still addicted to Starbucks. Pray for her folks.

I caught Matthew Hagee on TV preaching about the Left’s war on Christianity. His message was titled, “Enemy of the State”. http://bit.ly/1kdn6lj Folks, I was blown away, blessed and encouraged by his courage and boldness in sounding the alarm. That’s what I am talking about.

Pundits say Americans are “war weary” as a reason not to fight ISIS. Well folks, that is not how the adult real world works. Decent people hate war. But sometimes, war is your only option. War weary or not, you fight until you win or the aggressor backs off.

Trust me when I say I am war weary in the battle to restore America from Obama and his evil minions. Like the TV preacher who criticized conservative talk radio, I hate negativity. I am tired of having to report the Left’s daily attacks on Americans. But this is my responsibility. To my TV preacher brother in Christ, I respectfully say, don’t blame the messengers.

The good news is God is on our side and we will prevail.