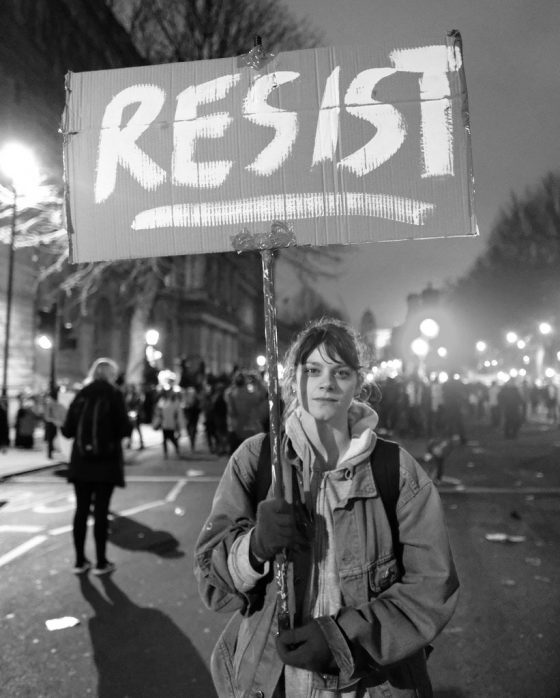 On “Fox & Friends,” President Donald Trump declared, in regard to the protests against him, “I think that President Obama’s behind it because his people are certainly behind it.” Once again, Trump has struck gold. It’s “gold” in the form of taxpayer money. In addition to funding from billionaire hedge fund operator George Soros, we find a federal financial connection to some of the anti-Trump protests.

The good news for Trump in this case is that his administration, supported by Republicans in Congress, can cut off the federal money.

One anti-Trump organizer, Dan Nejfelt of the George Soros-funded faux Catholic group, Faith in Public Life (FPL), serves as a case study of how a modern-day “community organizer” is made and paid. As the training director of FPL, he previously served as the “policy and messaging adviser” to the chair of President Obama’s Advisory Council on Faith-based and Neighborhood Partnerships.

Faith in Public Life was exposed in documents obtained and released by DCLeaks as a conduit for Soros money designed to move the Catholic Church in a left-wing direction. The “We Stand with Pope Francis” on climate change ad was an example of what this group did in 2016. The pope has been critical of capitalism, embraced the “climate change” agenda of deindustrialization, and opposed strong measures to assure border security for the United States.

FPL has informed its members in recent emails that President Trump’s new executive order “banning refugees from Muslim-majority countries” will have to be countered in the media. The response was designated as “Standing with Refugees in Word and Deed,” rather than focusing on their possible terrorist connections.

We are told that Nejfelt has been part of the FPL’s “most exciting achievements,” including involvement in “passing the Affordable Care Act,” otherwise known as Obamacare, and “defeating discriminatory religious exemptions bills in Georgia.” Despite the reference to “discriminatory,” the bills in question were designed to protect the religious liberty of conservative Christians who object to being forced by the government to condone or approve of homosexual behavior and conduct.

Earlier this year I reported on how Faith in Public Life held a “special briefing” on “Faithful Resistance to Rising White Nationalism,” with a left-wing operative from the Southern Poverty Law Center.

“Before FPL,” his bio says, “Dan taught remedial literacy in rural Arkansas as a Teach For America corps member, then studied investigative reporting, magazine editing and strategic communications at the Missouri School of Journalism. A long time ago, he got a B.A. in history at the College of William & Mary.”

The connection to Teach For America is significant. We are finding it in a growing number of cases of “community organizers” working in the “progressive” movement.

Teach For America is one of several charter programs of the federal government’s AmeriCorps, a project of the Corporation for National and Community Service (CNCS). Obama’s fiscal year 2017 budget requested $1.1 billion for CNCS.

But the Trump administration does not seem to agree. “Popular Domestic Programs Face Ax Under First Trump Budget” was the scare headline in The New York Times regarding proposed cuts affecting the CNCS, the Corporation for Public Broadcasting, and others.

During the main event of Teach For America’s 25th Anniversary Summit, President Barack Obama sent a special message to the 50,000 plus TFA corps members, alumni, and partners who were “working for educational equity in our country.” This includes, according to their own website, support for “a pathway to citizenship” for illegal aliens.

An alumnus of the group featured on the website is Michael Johnston, a former Democratic state senator in Colorado now running for governor. “During the two terms I served in the Senate,” he says, “I helped pass major progressive legislation, like the Dream Act, so undocumented students who had spent most of their lives in Colorado could get a fair shot at college…” He previously served as a senior education advisor to President Obama.

Teach For America’s official policy positions include support for:

According to its 2015 annual report, 12 percent of the funding for Teach For America comes from the federal government. Government grants and contracts were listed in the amount of $69,756,254. So-called “federal partners” were listed as AmeriCorps, the National Science Foundation and the Department of Education.

Nejfelt, the Teach For America alumnus now at Faith in Public Life, was trained at the Missouri School of Journalism but also served as a research assistant and copy editor at Investigative Reporters and Editors (IRE), where he “edited and fact-checked articles for the IRE Journal, a bimonthly publication providing resources and professional development for more than 6,000 investigative journalists worldwide.”

His bio also lists work at an organization called the New Organizing Institute, a “progressive grassroots organization” located in Washington, D.C. which “has suspended operations” and has “passed the torch” to Wellstone Action, a group named after the former Minnesota Senator Paul Wellstone (D). It is dedicated to “building progressive power coast to coast.”

Over the past 14 years, Wellstone Action says, “we’ve propelled over 850 alumni into elected office and guided over 3,500 winning campaigns.”

Through federal programs like the Corporation for National and Community Service, taxpayers are helping to make it possible.