President Obama’s administration has blocked more than half a million Freedom of Information Act (FOIA) requests in the last six years, reports WorldNetDaily. This blatant circumvention of the law is causing some in the mainstream media to finally voice their concerns about how President Obama is running the government.

That is, unless you’re David Brooks of The New York Times. “And I have my disagreements, say, with President Obama, but President Obama has run an amazingly scandal-free administration, not only he himself, but the people around him,” Brooks declared on the PBS Newshour on May 29. “He’s chosen people who have been pretty scandal-free.”

That’s simply absurd. Perhaps, for the Obama administration, it’s proven easier to deny the media’s access to information that might reveal further scandals than to admit the truth about its own deep-seated corruption. But as we’ve written, the derelict mainstream media leave “many scandals uninvestigated, minimized, or outright ignored,” including Benghazi, Fast and Furious, the IRS scandal, and even the maltreatment of veterans or endangerment of our air travel.

FOIA is one tool for discovering the truth. Newsweek investigative reporter Leah Goodman recently “said there were no Washington-based editors or reporters from major publications on the panel testifying before the [House Oversight Committee] because they were afraid it would have a ‘chilling effect’ on their relations with the federal departments they cover,” according to WND’s Garth Kant.

“Goodman said that was also the reason no one had done a major story on the problems with government agencies stonewalling FOIA requests.”

At Accuracy in Media, we have a lot of experience dealing with the government on FOIA issues, over many years. And they sometimes take years to resolve. As a matter of fact, we currently have filed dozens of such cases in our effort to fill out the record surrounding the terrorist attacks in Benghazi in 2012. What we already know based on previously released information through other FOIA requests and lawsuits, as well as from the public record and individuals who have brought information to our Citizens’ Commission on Benghazi, is chilling, and points to a systematic government cover-up.

“When Hillary Clinton was secretary of state, her staff scrutinized politically sensitive documents requested under public-records law and sometimes blocked their release, according to people with direct knowledge of the activities,” reported The Wall Street Journal last month. Records that Clinton and her aides held back included documents regarding the Keystone XL pipeline and President Bill Clinton’s speaking engagements.

Years later, these very same issues are still inciting controversy, as further Clinton and Obama administration corruption has been uncovered by authors such as Peter Schweizer. “As Clinton Cash makes clear, speech payments by Keystone XL investor TD Bank to Bill Clinton occurred at critical moments when Hillary Clinton’s State Dept. was making key decisions affecting the pipeline,” reports Breitbart News. “Moreover,” citing Schweizer, “Canadian corporations with an interest in the project hired several senior aides from Hillary’s presidential campaign to assist them in their efforts.” Millions of dollars flowed to the Clintons personally for “speeches,” and TD Bank got the decision it was hoping for from Hillary’s State Department. Smoking gun? You decide.

Republican operative Karl Rove writes in The Wall Street Journal that “few demonstrate as much contempt for journalists as do Barack Obama and Hillary Clinton.” That may be true for Obama, but Mrs. Clinton has taken a different approach. Her platforms, the Clinton Foundation and its project, the Clinton Global Initiative, have given the appearance of humanitarian work, drawing many big names from the media into her network of influence. No wonder they treat her with deference and respect. The media have been compromised.

It appears that Tapper will still participate in the meeting, but not as a speaker.

This Tapper controversy should put an end to the pretense that George Stephanopoulos of ABC News is the only member of the journalism business who was compromised through his involvement in the Clinton Foundation. A list of media members of the Clinton Global Initiative in 2011 included Stephanopoulos and many others:

The pro-Clinton group Media Matters has been having a field day with the news that Fox News personalities were on the list. The group points out that Van Susteren and Bartiromo have both lavished praise on the Clinton Global Initiative for its good work.

For our part, we have been drawing attention to media links to the Clintons for at least 10 years. It wasn’t considered controversial by the media, on the left or right, until the release of Peter Schweizer’s new book, Clinton Cash: The Untold Story of How and Why Foreign Governments and Businesses Helped Make Bill and Hillary Rich. Schweizer has attempted to link some of the contributions made to the Clintons to actions taken by the Obama administration when Mrs. Clinton was Secretary of State.

We noted back in 2005 that Rupert Murdoch, chairman and CEO of the Fox News parent company, was a participant in the Clinton Global Initiative meeting held in New York in mid-September of that year. As we also pointed out, Clinton himself had appeared on Greta Van Susteren’s Fox News Channel show to promote the event.

That same year we reported that the Fox News Channel, in addition to giving Clinton a platform to talk about his Global Initiative, had done then-Senator Hillary Clinton a big favor by canceling some interviews with Ed Klein, the author of a book critical of Hillary.

Back in 2007 we noted that Murdoch had personally made a $500,000 gift to the Clinton Global Initiative.

Clinton’s lengthy reply to this softball question included praise for Frank Giustra, the Canadian business executive, for giving $20 million. Giustra’s donations have subsequently been linked to a plan to win U.S. approval to sell a uranium company to Russia.

Rather than look into the contributions of Giustra and others, Van Susteren encouraged others to contribute to the Clintons. She said to the former president, “A lot of people look at the program, a lot of big names, big contributors and very generous, what about somebody who says I don’t have any big money to contribute. I might have some ideas, or I’m willing to do some leg work to help. How can I participate?”

Isn’t that nice? Even Fox News was in bed with the Clintons.

In a September 27, 2012 column, we pointed out that members of the media scheduled to speak at that year’s Clinton Global Initiative meeting were:

It turns out that 2012 GOP presidential candidate Mitt Romney even attended and addressed that year’s Clinton Global Initiative meeting. Perhaps he had been told by Republican advisers like Rove that it was a humanitarian event with a bipartisan flavor.

“Since serving as President here in America,” Romney declared, “President Clinton has devoted himself to lifting the downtrodden around the world. One of the best things that can happen to any cause, to any people, is to have Bill Clinton as its advocate. That is how needy and neglected causes have become global initiatives.”

The comment goes to show how Clinton, who disgraced himself by having sex with a White House intern and was impeached, has had his reputation rehabilitated. A Republican who got caught doing such things would be forced to slink away and beg for forgiveness from the media.

Romney may have gotten bad advice about going to that event, but it was Romney himself who told Jan Crawford of CBS News during the campaign that the major media were not in the tank for President Obama and that he had no plans to challenge liberal media bias.

No wonder the Democrats are so confident about their ability to manipulate the press. They have the Republicans eating out of their hands. 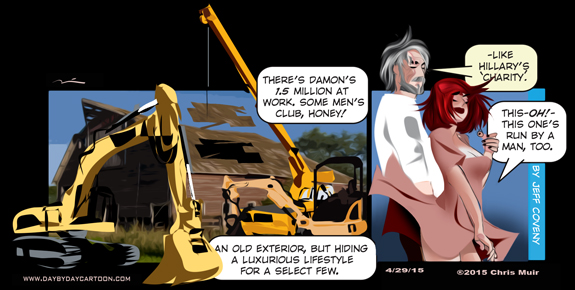 Before Hillary left office in 2013, the Clintons appeared bound and determined to slurp up as much money into their Foundation as possible, spending as little on direct aid as one could imagine for a “charity”. The New York Post reports:

The Clinton Foundation’s finances are so messy that the nation’s most influential charity watchdog put it on its “watch list” of problematic nonprofits last month.

The Clinton family’s mega-charity took in more than $140 million in grants and pledges in 2013 but spent just $9 million on direct aid. 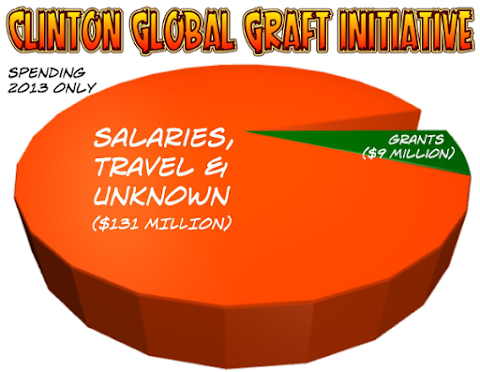 The group spent the bulk of its windfall on administration, travel, and salaries and bonuses, with the fattest payouts going to family friends.

In 2013, according to the Clinton Foundation’s IRS Form 1990 filing [PDF], the organization actually spent more than twice as much on travel, conferences, conventions and meetings than on actual, eh, grants.

Even the grants that were made were dubious “investments”. One such grant was nearly half a million dollars to a San Francisco-based group called “Architecture for Humanity”. Earlier this year the group announced it was closing its doors. 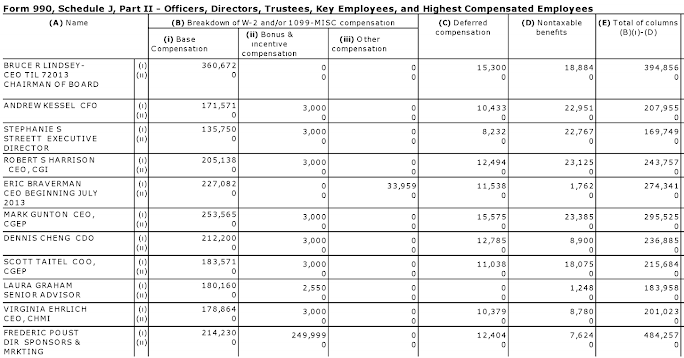 The average compensation for the top Clinton Foundation executives we know of was roughly a quarter of a million dollars a year. In fact, as Karl Denninger explains:

You might be interested in knowing that the “charity” had 35 employees with reportable compensation (that is, over $100,000) and their top five combined had $2.6 million in direct (that is, cash) compensation and another $278,000 in benefits for approximately $3 million — or 1/3rd of all spending on “charitable causes”. On a grossed-up basis the charity spent $21.8 million on salaries and wages or approaching three times what it spent on “charity.”

In other words, it was — as the Sunlight Foundation describes it — “a slush fund“, not a charity.

Related: CHART O’ THE DAY: How the Clinton Global Initiative Used its Funds During Hillary’s Tenure at State

In 2010, when Barack Obama said, “I do think at a certain point you’ve made enough money,” he definitely wasn’t referring to the Clintons.

That piggy bank, otherwise known as “The Clinton Global Graft Initiative”, had an interesting way of doling out the “contributions” it received. 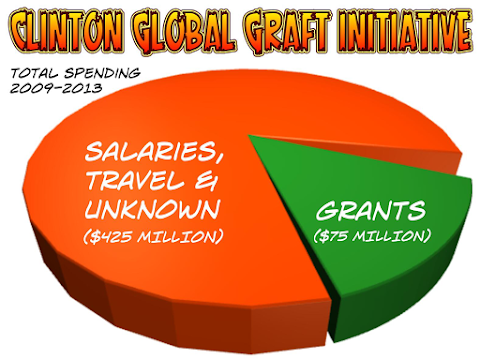 The Clintons are a malignant tumor on the body politic. They have a history of doing anything for money — including selling out their own country — and when it comes to their personal bank accounts, there’s apparently never enough zeroes.