Below is Part 1 of the report compiled by Glenn’s research team for Monday’s special “The Red Storm”. Part 2 will be posted Tuesday, followed by Part 3 on Wednesday.

George F. Kennan was a United States diplomat serving as deputy head of mission in Moscow in 1946. The war was over and the entire world was in the process of rebuilding and moving on. One very large obstacle was Stalin and the Soviet Union. The U.S. Treasury department’s International Monetary Fund and World Bank were gaining traction, but they couldn’t get the Russians to support it. The Treasury Department asked Kennan to explain what the deal was.

Kennan’s response would later be dubbed “The Long Telegram”. It was an 8,000 word communique that warned of Russia’s plans for the future of Europe.

“The main element of any United States policy toward the Soviet Union must be a long-term, patient but firm and vigilant containment of Russian expansive tendencies … Soviet pressure against the free institutions of the Western world is something that can be contained by the adroit and vigilant application of counterforce at a series of constantly shifting geographical and political points, corresponding to the shifts and maneuvers of Soviet policy, but which cannot be charmed or talked out of existence.”

Kennan’s solution was to take steps to block Russian expansion everywhere they could. The U.S. containment strategy was born. Kennan would later be called the “the father of containment”. Europe would be divided in two. A distinct line or “Iron Curtain” split the Russians in the East from American allies in the West.

Most people trace the Russian/Western conflict back to this moment. A competition born from the ashes of World War 2. In all actuality this fight is much much older. To get at the root of this problem we have to trace it back over a thousand years. To the split of the Roman Empire.

In the late 700’s the Roman Empire was divided. The Christian Papacy was based out of Rome, but the government was now ran from Constantinople. The Byzantine Empire would be dubbed “the Eastern Roman Empire” and even “the second Rome”. The heavily Greek influenced Byzantines began to adopt Greek language and customs moving away from the latin language. Western Rome became more and more alienated maintaining their allegiance to the papacy. Rome became more of a protectorate to the Byzantines relying on troops from Constantinople to protect the Pope.

Rome and the papacy were on the verge of elimination. A barbarian tribe called the Lombards had invaded modern day Italy and set out to rule Rome. This time the Byzantines were unable to run to Rome’s rescue. Hordes from the Steppe were ravaging Eurasia and the Byzantine military was fully committed. In desperation the Pope reached out to Charlemagne the new King of the Franks. Besides the Pope, Charlemagne was the most famous Christian in Western Europe. Charlemagne rode to the Pope’s rescue and defeated the Lombards. Charlemagne became the Pope’s champion. Not only liberating Rome but Uniting all of Western Europe. On Christmas Day in the year 800 Pope Leo III crowned Charlemagne Emperor. His empire would stretch all the way to the Slavic lands. If you laid a map of Charlemagne era Europe next to a map of Cold War era Europe the division is nearly identical. 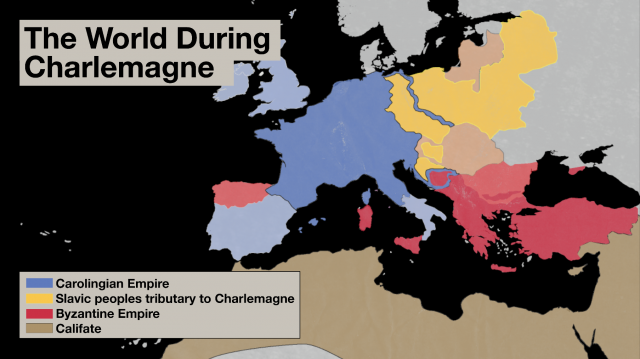 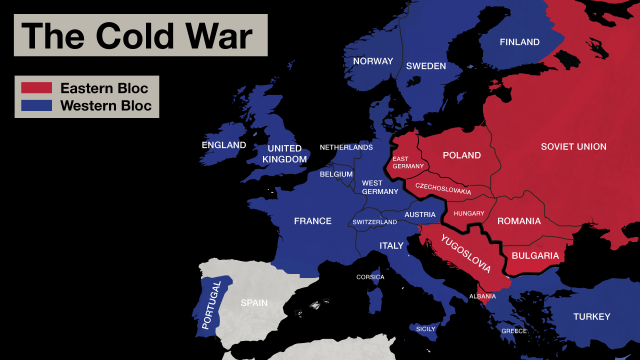 After Charlemagne’s death his empire was split amongst his sons. The result of these divisions would lay the foundation for the modern day nation states of Germany and France. Carolingian Christianity would forever dominate Western Europe. They would look to Rome as their spiritual center.

While the Apostle Peter was headed towards Rome the Apostle Andrew headed north toward the Black Sea. Andrew converted Slavs in Crimea even traveling as far as present day Kiev. Standing in what would later be called Ukraine the Apostle Andrew declared that “a great Christian city” would one day be founded there. St. Andrew’s Cathedral now stands in Kiev at that exact same spot.

800 years after Andrew made his prophecy Prince Oleg of the Rus’ ruled in what is now Northwest Russia near the borders of Estonia and Finland. Prince Oleg was looking for a more strategic location to base his kingdom after getting attacked repeatedly by steppe hordes. He campaigned south eventually settling at the same location the Apostle Andrew made his prophesy. Kiev became the capital of what was called Kievan Rus’. At that time the “Russians” declared Kiev “the mother of all Rus’ cities”.

The Rus’ used their new capital of Kiev to strike back at the steppe invaders and defended trade routes from the Baltic Sea to the Black Sea. With their power and pocket books building they began to challenge the Byzantine Empire. Even attacking Constantinople herself several times from the late 800’s to early 900’s.

The ever clever Byzantines decided to use their culture and their religion as the best weapon against the Rus’. A Byzantine monk named Cyril developed a written language based off the Slavic dialect from Greeks in Thessalonica. In this writing Cyril translated the bible and other Byzantine prayers and liturgical rite. The Christianization of the Slavs had begun. In 988 Vladimir the Great was baptised in Crimea and Kievan Rus’ became a Christian State.

The Mongol invasion would eventually splinter Kievan Rus’. The Russians abandoned Kiev and did as they’ve always done when facing elimination. Taking advantage of their defense in depth they retreated Northeast up into the Russian forest.Through it all the Orthodox Church remained their center. The Russians moved the Kiev church to Moscow and they continued to look toward Constantinople as their home base.

Eastern Orthodoxy would become fused into the DNA of every Russian. Places such as Kiev and the Crimea peninsula are considered their holy sites. The legitimacy of such traced all the way back to an apostle of Jesus. You could make the argument that just as Charlemagne saved Roman Catholicism in the West the Eastern Orthodox Church saved the Russians in the East and helped keep them together. When the Byzantine Empire effectively collapsed the Russians saw it as their holy succession to establish the “Third Rome”. The Russian Orthodox Church provided their divine legitimacy.

The medieval “Iron Curtain” line was drawn. It was further solidified in the 11th century during the Great Schism. The Roman Catholic Church officially split from the Eastern Orthodox Church. Western Europe continued to look to Charlemagne’s France as their protector and leader. Eastern Europe looked to Russia as their champion and preserver of Eastern Orthodox tradition. Russian nationalism was always centered on Orthodoxy. It wasn’t until the dawn of the 20th century that a certain leader tried to change the Russian struggle from cultural….to class. But the ROOT of this conflict began over a thousand years ago.