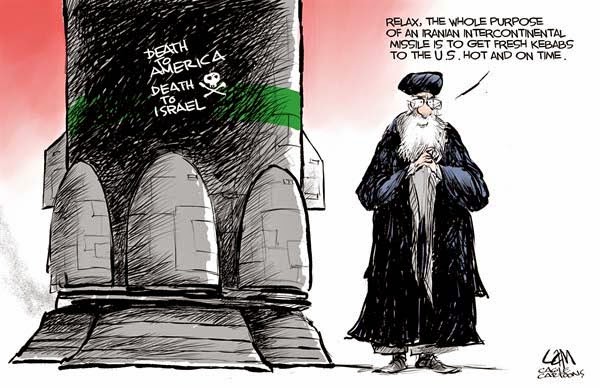 “Has the U.S. already conceded a new era of nuclear proliferation?” and concluded that “Mr. Obama is so bent on an Iran deal that he will make any concession to get one.”

As we should know by now, President Obama has no negotiating skills and even less understanding of the world the U.S. used to lead by virtue of its military power and democratic values.

If he succeeds in getting a deal, absent Congress doing anything about it, the Wall Street Journal says it will result in “a very different world than the one we have been living in since the dawn of the nuclear age. A world with multiple nuclear states, including some with revolutionary religious impulses or hegemonic ambitions, is a very dangerous place.”

Yes, but. We already live in such a world and the real question is whether, absent their “revolutionary” rhetoric, shouting “Death to America!” and “Death to Israel!” do those at the top levels of the Iranian ruling structure want to risk having their nation destroyed if they were ever to use nuclear weapons?

No nation on Earth has done so since the U.S. ended the war with the Japanese Empire with two atom bombs rather than put at risk the lives of our troops in an invasion. Why do we think Iran would use their nukes if they acquired them?

The short answer is that the United Nations has passed six resolutions to deny Iran the capability of developing a military nuclear program and the current negotiations, the P5+1, while led by the U.S., are joined by Russia, China, France, the United Kingdom and Germany. 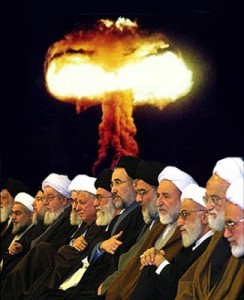 Nations in the Middle East and around the world are inclined to think the Iranian leadership would use such weapons. Obama is intent on ignoring their judgment.

If you want to know why Iran continues to be involved in negotiations to restrict its nuclear weapons agenda, you need to know that the U.S. will release $11.9 billion to Iran by the time the talks are concluded in June. That’s the figure cited by our own State Department.

On January 21, the U.S. released $490 million, the third such payment since December 10. For sitting at the negotiations table, Iran will secure $4.9 billion in unfrozen cash assets via ten separate payments by the U.S. It had received $4.2 billion in similar payments under the 2013 interim agreement with the U.S. and was given another $2.9 billion by the Obama administration last year in an absurd effort to get them to agree to end their effort to become a nuclear power.

In a sense there are several Iran’s. There is the Iran of the Supreme Leader and the Revolutionary Guard, both committed to the Islamic revolution that brought the present day Iran into being in 1979. They value having a nuclear weapons capability no less than the U.S. or other nations do.

Then there are the Iranian realists who would far prefer a detente between the U.S. and Iran because they believe it would be in both our interests. These are the voters who elected Hassan Rouhani in 2013 to replace Mahmoud Ahmadinejad who has served in office from 2005. They represent some 70% of its citizens would want peace, trade and normal relations with the U.S. Their leaders, however, have thoughts of hegemonic power in the Middle East to advance Shiite Islam.

The problem is that many of the Iranian leadership do not speak in terms other than an utter contempt for the U.S. and with an outspoken enmity for any nation that opposes the expansion of Islam. In late January, one of its newspapers, Kayhan, reported that “Professors, students and employees at the Imam Sadeq University, condemning the insults against the prophet of Islam by Charlie Hebdo…demand closure of the French embassy in Tehran.”

The demonstrators carried placards read, “I am not Charlie, I am the innocent child of Gaza”, “Death to America”, “Death to Israel”, “Death to Britain”, “Death to France”, ‘Death to Wahabism” and comparable signs all indicative of Iran’s hostility to any response to the terrorism it has sponsored for decades since the Islamic Revolution was initiated there in 1979.

On January 23, Iran’s Foreign Minister, Mohammad-Javad Zarif, addressed the World Economic Forum in Davos, Switzerland, saying “I do not believe that ten years of confrontation will have had any benefits for anyone. Ten years of sanctions has yielded 19,800 centrifuges, exactly that which the sanctions wanted to halt.”

There is no question that sanctions and the long negotiations have reduced Iran’s capacity to create nuclear weapons agenda. The current negotiations, however, are signaling an abandonment of that policy.

At Friday prayers in late January, Hojjat al-Eslam Zazem Sediqi told those in attendance “Our statesmen should know the enemy, should know with whom they are dealing and negotiating with…You are speaking with wild beasts which do not show mercy to (anyone) young or old, and who insult the Prophet, the most sacred of sacred.”

The Foundation for Defense of Democracies (FDC) maintains a constant monitoring of Iranian news media and government outlets. The reported news out of Iran paints a picture of fire-breathing zealots against a moderate political class and population. The question is whether the zealots will have the final word.

On January 28, Ali Alfoneh, a FDC senior fellow, authored a policy brief that concluded that “Even in the unlikely event that Iranian President Hassan Rouhani and his negotiating team reach a nuclear agreement with international negotiators, its implementation may well fall to the Islamic Revolutionary Corps…The IRGC’s vociferous opposition to nuclear concessions and improving ties with the West raises serious questions over whether future Iranian governments will uphold any nuclear deal that the current one signs.”

There are two major power centers in Iran, the Supreme Leader, Ali Khamenei, and the IRGC. Rouhani is routinely referred to as “a moderate.” As Alfoneh noted, “Meanwhile, Rouhani’s cabinet is torn between public demands for jobs and human rights, the creeping infiltration of the IRGC, and the Supreme Leader’s dogged attempts to maintain the status quo at all costs.”

In late January, the Democrats on Capitol Hill, led by Robert Menendez (D-NJ) gave Obama another two months to reach a deal before they vote for new sanctions. In the House, progressives are urging their colleagues to hold off moving any legislation that would tighten economic penalties on Iran. At this point, the only thing that has worked has been sanctions and the return of frozen funds, a form of bribery.

Meanwhile, Iran has taken credit for the training and arming of Shiite rebels who overthrew the leadership in Yemen. Iran also supports the Hezbollah in Lebanon that is threatening Israel from the area of the Golan. In reprisal for a recent attack, Israel responded with an air strike that killed an Iranian general. None of this helps position Iran as a potential peaceful partner.

This is why John Boehner, the Speaker of the House, has invited Israel’s Prime Minister, Benjamin Netanyahu, to address a joint session of Congress. He did so without consulting the White House, but we should keep in mind that Obama released five Taliban generals from Gitmo without consulting Congress.

Netanyahu will spell out what he has said in the past. A nuclear Iran is an existential and a potentially catastrophic threat to Israel. He will likely point out that it is a threat to Saudi Arabia and all the other nations in the Middle East and worldwide.

The question is whether we are dealing with rational people leading Iran or not. In the end, we are asked to assume that even the Supreme Leader and the Revolutionary Guards want to live, want their children and grandchildren to live, and want their nation to continue. That is what Obama is betting on. The problem with that is that Islam puts a high value on martyrdom.