Before we take a look at the broader situation, I share two announcements:

This Friday, March 27th, at noon, there will be a press conference and a “Keep Iran Nuclear Free” rally, at 780 Third Avenue (between 48th & 49th Streets) in Manhattan. This is in front of the offices of the Manhattan offices of New York Senators Chuck Schumer and Kirsten Gillibrand, to urge these Senators to commit to overriding President Obama’s expected veto of two important pending bills on the issue of Iran.

The Bipartisan Iran Nuclear Agreement Review Act of 2015, sponsored by Senators Corker, Menendez, Graham and Kaine, mandates that the president must submit the text of any agreement with Iran to Congress; prohibits the administration from suspending congressional sanctions for 60 days, during which Congress would hold hearings and review the agreement; provides for Congressional oversight; and requires assessments and certifications of Iranian compliance.

Every vote is needed.

And then, for Israelis and those planning to be in Israel over the Pesach week:

Location: Buses will depart from and return to the Inbal Hotel, Jerusalem.

An expert will accompany each bus; detailed maps will be provided, as will water.  Bring your own food.

To Register: by April 3, www.regavim.org.il/en/events/Pesach

As to what has been exposed (if you haven’t already guessed), it is Obama’s hatred for our prime minister and his paranoid vindictiveness.

However supporters of Obama (particularly Jewish supporters) have, over the past years, tried to convince themselves that Obama was a friend of Israel, it has never been the case.

If you doubt this, please take the time to see this video (with thanks to Michael Widlanski for calling it to my attention):

“Daylight: The Story of Obama and Israel” – https://www.youtube.com/watch?v=0wbH5KVPrPo&feature=youtu.be

What has happened now is that Obama’s antipathy for Israel has grown enormously.  The president does not like to lose and is not fond of compromise.  If he does not achieve what he wants, he goes after those whom he sees as stumbling blocks.

It was bad enough for him that, in spite of his efforts to block Bibi, our prime minister came to the Congress – to a resounding welcome that must have been galling for the president – to speak against the deal with Iran that is close to completion.

Clearly, he resolved to “fix” Bibi after this, by making sure that he was not re-elected.  We know that there were American funds invested in the effort to defeat Bibi at the polls, as well as assistance provided to the Buji campaign by former Obama advisor Jeremy Bird and the team he brought with him.

An official here in Jerusalem has charged that the White House was directly involved in the attempt to unseat the prime minister:

But there is even worse: There are reports from a Likud strategist of an effort “’to organize the [Israeli] Arabs into one party and teach them about voter turnout.

“’The State Department people in the end of January, early February, expedited visas for [Israeli] Arab leaders to come to the United States to learn how to vote,’ McLaughlin exposed.

“He added, ‘there were people in the United States that were organizing them to vote in one party so they would help the left-of-center candidate Herzog, that the Obama administration favored.’” (emphasis added)

This, my friends, was the source of Bibi’s concern during the election that the Arabs were coming “in droves.”  He knew it was a set up, but Obama then turned this into a “racist” statement, which it was not.

In the end, all of the dirty tricks didn’t work, and Netanyahu secured a victory.  Oh, how galling this must have been for Obama.

I’ve already written about his overheated response, with the decision to “re-evaluate” the US relationship with Israel.

But since I last wrote, it has gotten worse still.  The latest accusation is that Israel “spied” on negotiations with Iran and then leaked information to members of Congress.

Spied?  What does this mean?  There is no evidence offered, simply an empty (silly) charge.  Does Obama imagine that Israel designed little robots that look like flies and were able to sit on the wall of the negotiating room, recording information? What?

The information I do have is that Israeli officials are in touch with some of those who are in the negotiating process – primarily from France – and have been thus kept informed. This is not “spying.”

And then there is the whole issue of Netanyahu “sharing” information with members of Congress.

Please understand what sort of siege mentality the president has, that he considers it inappropriate for members of Congress to know what’s going on. This is at the core of Congress’s battle with him:  Its members believe they must be informed and involved, and he’s fighting them every step of the way.

What we have here, then, is a very sick situation.  Exceedingly nasty.  Dangerous, certainly. But it seems to me beyond the bounds of what is rational. This is Obama becoming unhinged.

And you know what?  In some respects, I see this as not a bad thing. For, many who supported Obama – who believed him when he said he had Israel’s back – have now had their eyes opened. There is a significant shift in how Obama is being seen in several quarters within the US.  Consider (with emphasis added):

“’The fact that the outcome of a democratic election in Israel seems to be of great concern [to the Obama administration] is cause for deep anxiety and puzzlement,’ said David Harris, executive director of the American Jewish Committee.’

“’Whatever the failings of the prime minister, the way this is unfolding runs completely contrary to the spirit of US-Israel relations,’ Harris said. ‘The US appears to have a reasoned interest in prolonging the crisis’…

”’As someone who was critical of several steps by [Netanyahu] during the campaign leading up to his reelection, I am even more troubled by statements now coming out of the White House,” said Abe Foxman, longtime national director of the Anti-Defamation League.

“What we are hearing from the Obama administration raises deeper questions about their intentions and perspectives,’ he said, adding that ‘from the beginning of the Obama years, there was a disturbing indifference to the mind-set of the Israeli public.’”

OK, so now we have establishment Jewish leadership – which has pretty much toed the line for Obama – looking askance at him.  Good.  Hopefully there is a body of Jews within the American electorate that is now also revisiting the issue of Obama as friend of Israel.

But there is also a troubling side to this situation: That is Netanyahu’s MO – his propensity for seeming to play the game rather than being confrontational.  We had reason to hope there had been a shift away from this tendency of his.  He demonstrated a strong conviction and was willing to buck the president when it came to his talk in Congress.  This was the Bibi to be admired and supported. He showed he could do it – as he has shown before.  I remember his lecture to Obama in the White House, as to why we cannot return to the ‘67 lines.

But now?  Now I have picked up news that – if accurate – is greatly unsettling:

According to YNet, Israel is freezing construction of 1,500 new housing units in Har Homa:

“The massive construction plan in Har Homa has been suspended ‘for neither planning nor professional reasons.’

“The Ministry for Construction and Housing and Jerusalem municipality confirmed that two critical planning discussions set for the coming week on advancing the construction have been canceled for unknown reasons.

“Planning officials familiar with the details of the plan told YNet that the program is not being advanced due to the political sensitivity and that there had been no approval from the Prime Minister’s Office to hold the planning discussions.”

Har Homa (officially Homat Shmuel) is outside the Green Line and often referred to as a “settlement” in “east (sic) Jerusalem.”  In fact, it is in the south of Jerusalem, within the municipal lines of a united Jerusalem, and a strategically important neighborhood.  Founded in 1997, under the watch of Netanyahu, it is located only about a kilometer from Bethlehem.  Netanyahu has indicated that this neighborhood serves as protection for “the southern gateway of Jerusalem.”  The area is being constructed in stages – reportedly there is a master plan; the current population is 25,000. 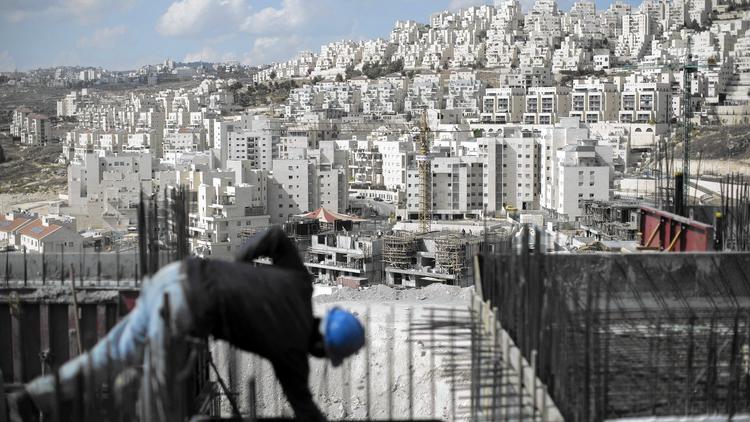 Just days ago, before the election, Netanyahu stood in Har Homa and pledged to continue building in Jerusalem.  He knows that it is possible to continue in spite of international uproar, for he faced an uproar when approving the construction of the first stage of Har Homa 18 years ago.

Yesterday, at a  press conference, Obama declared that Netanyahu’s words have made the possibility of a “two state” deal unlikely:

“Netanyahu, in the election run-up, stated that a Palestinian state would not occur while he was prime minister.  And I took him at his word that that’s what he meant.

“Afterwards, he pointed out that he didn’t say ‘never,’ but that there would be a series of conditions in which a Palestinian state could potentially be created. But, of course, the conditions were such that they would be impossible to meet any time soon.”

Obama said that in light of Netanyahu’s comments, the “possibility seems very dim” for the Israelis and the Palestinians to reach an agreement.

“’We can’t continue to premise our public diplomacy on something that everybody knows is not going to happen, at least in the next several years,’ the president said.”

It is hardly necessary for me to say much about how dishonest and low Obama’s approach is.  As if everything was in place, and peace was going to burst out any second – but Netanyahu destroyed it.  As if Netanyahu’s conditions were anything but reasonable.

This statement by Obama followed a speech by his chief of staff, Denis McDonough, in which he declared that “an occupation that has lasted for almost 50 years must end.”

Bibi knows full well how correct he is about the impossibility of a “Palestinian state” now – because of the terrorism in the region, and because of Abbas’s total intransigence as well (never mind because of our legal rights).  But there remains great unease that Obama’s approach may put him on the defensive and motivate him to “prove” his intentions.

As far as I can determine at present, the report about the stoppage for political reasons is coming only from YNet – which has a distinctly leftward tilt. The prime minister’s office, referring more to bureaucratic process, denies the stoppage was motivated by politics.

This is a situation that must be watched closely. Within days we should have a more definitive picture.

We might hope that Bibi Netanyahu would take the advice of Brett Stephens, writing on “The Orwellian Obama Presidency” (emphasis added):

”Here is my advice to the Israeli government, along with every other country being treated disdainfully by this crass administration: Repay contempt with contempt. Mr. Obama plays to classic bully type. He is abusive and surly only toward those he feels are either too weak, or too polite, to hit back…

”The Israelis will need to chart their own path of resistance…Israel survived its first 19 years without meaningful U.S. patronage. For now, all it has to do is get through the next 22, admittedly long, months.”
http://www.wsj.com/articles/bret-stephens-the-orwellian-obama-presidency-1427153308?mod=hp_opinion