We here at the Tea Party Express have been disappointed to see protests and boycotts being waged against the state of Arizona for their stand against illegal immigration.

The people of Arizona were left without choice – they had to take action to fight a problem that no one has been willing to take seriously and tackle: rampant out-of-control illegal immigration.

You can stand with Arizona and show your support for their efforts by signing onto the petition drive supporting their crackdown on illegal immigration:

Please help us grow this effort. Share this link for others to sign. Send it out to your email lists. Post to message boards online. Let’s get this petition drive spread all across the country: http://www.ipetitions.com/petition/supportarizonaimmigrationlaw/

Bob McCarty Writes – Missouri’s Use of Federal Funds ‘Most Unusual’

WND – The Obama-Ayers meeting: What you haven’t been told

Free Republic – The Ever War: Stalin, Hollywood and the Editing of History (Hat Tip: Jean Stoner)

The Radio Patriot – The movement that created Barack Obama

END_OF_DOCUMENT_TOKEN_TO_BE_REPLACED

After the IMF Bails Out Europe, the U.S. May Have to Bail Out the IMF (read & weep) (Hat Tip: Jean Stoner)

The Price of Obamacare, or The Full Faith and Credit Card (Hat Tip: Jean Stoner)

Inflation up 2% in March

Wall St overhaul bill to give control of the internet to FTC?

GM Sales Up 6.4 Percent in April

Note the fait accompli tone of this NPR article that of course inevitably leads to the conclusion that there will be either massive tax increases, or mass inflation in the near future: The Federal Debt: How To Lose A Trillion Dollars.

Treasury Redeems A Gargantuan $643 Billion in Treasuries in April.

Want a good belly laugh? If so, then read this item from Chad S.: Corporations ride a consumer spending spree to better earnings as recovery gains steam. Here is Chad’s favorite absurd quote from the article: “We¹re out of the woods for good, says Joseph LaVorgna, chief U.S. economist at Deutsche Bank. This is no just an arithmetic story. It¹s a story of legitimate growth.” JWR Adds: All this “recovery” talk at present is utter nonsense, triggered by short term stimulus money. The end result will be no real recovery and mountains of compounding debt.

Another Look at Derivatives

Roubini: In a Few Days’ Time There Might Not be a Eurozone for Us to Discuss

US Food Inflation Spiraling Out of Control

The Dominoes are Lining Up for a Sovereign Debt Crisis

GDP Rise Not Enough to Make Dent in Jobless Rate

It is becoming increasingly clear that Barack Obama did not create a movement. A movement created Barack Obama.

One of the key leaders of that movement is a Madison, Wisconsin law professor and sociologist – Joel Rogers.

While not widely known outside “progressive” circles, few people have exercised more influence in more strands of the movement that selected and elected Barack Obama, than has Joel Rogers.

Obama’s former “Green Jobs” Czar, the Marxist-Leninist Van Jones has been part of Rogers’ network for some years.

In the video below, Van Jones takes time in his address to the January 2009 Mayors Innovation Project conference to praise his friend Rogers.

Jones points out three “great gifts” that Joel Rogers “has given our movement.”

Firstly, there is “a new economic model …high road development …the best thinking that he represents is now reflected in the White House.”

Secondly, …”the New Party, which is now the Working Families Party…the idea of a ‘new politics’ that you could actually have in this country bringing together labor, civil rights, feminists…and actually make a difference…is the basic framework for what just took over the White House.”

Thirdly, …”his idea of a new energy paradigm. His founding the Apollo Alliance. I believe the stimulus is going to put something like $80 billion in this direction…”

Jones credits Rogers with dreaming up the White House economic model – basically a 21st century “green” version of corporate socialism. Rogers also allegedly masterminded the electoral alliance that put Obama in the driver’s seat. He then founded the organization that helped write the “stimulus bill,” which is now funneling billions into a movement primarily designed to keep Obama and the Democrats in power.

That’s a lot of influence for one man. Does Van Jones exaggerate? Let’s investigate.

The New Party which Rogers and Dan Cantor founded in the early 90s, was an attempt to unite the poor, Blacks, Latinos, labor and “community groups” to work with and inside the Democratic Party to elect large numbers of leftist candidates to public office.

The very first meeting included Gerry Hudson from DSA and SEIU and early ACORN leader and IPS affiliate Gary Delgado. Anthony Thigpenn, from Los Angeles was also approached, but though supportive, did not wish to play a leadership role.

The party was socialist in character, but only revealed its true nature to friends.

In March 28-30 1997, Democratic Socialists of America convened their annual Socialists Scholars Conference at Borough of Manhattan Community College, New York. Barack Obama, incidentally, attended some of these conferences in the early 1980s.

The 1997 conference was themed “Radical alternatives on the eve of the millenium.”

Invitees were asked to join the debate on “changes in the labor movement, Marxist theory, the state of the economy, market socialism and other areas where theory and practice meet…listen to the United States’ only independent and socialist congressman, Rep. Bernie Sanders…” dialogue with Joel Rogers of the New Party…”

The New Party relied on “fusion” voting for its success. Candidates ran on both the Democrat and New Party lines, combing the vote totals from both. This practice was illegal in many states, so in 1997, Rogers and his wife Sarah Siskind took a case to the Supreme Court seeking to overturn the state bans.

According to the The Milwaukee Journal Sentinel December 5, 1996:

With allusions to possible electoral chaos, justices of the U.S. Supreme Court expressed skepticism Wednesday over an effort to overturn 40 state laws that forbid nominations of the same candidate by more than one political party.

The high court heard arguments in a case from Minnesota that was orchestrated by a Wisconsin couple: Joel Rogers, a University of Wisconsin-Madison law professor, and his wife, Madison attorney Sarah E. Siskind.

Rogers is a co-founder and national chair of the New Party, which describes itself as progressive and claims 10,000 members nationwide. The party has elected candidates for local offices in Wisconsin and elsewhere.

The case failed and “fusion” voting was ruled unconstitutional. Deprived of its main tactic, the New Party went into sharp decline, surviving under the Working Families Party banner in New York and a few other states.

According to Miner, Barnhill and Galland:

For the last ten years, the firm (principally Sarah Siskind) has also represented individual consumers and organizational plaintiffs in class action lawsuits challenging predatory lending practices. These include a series of deceptive practice actions brought in Illinois, California and Massachusetts against Household Finance Corporation and recently consolidated in re Household Lending Litigation, Case No. C-02-1240 and Related Cases, N.D. Ca.) and settled for $152 million in benefits and future practice change relief…

It was a socialist “win-win” situation. Siskind and Miner, Barhill & Galland made money, ACORN was able to force another mortgage lender to make more soft loans to its “core constituency” and the 2008 sub-prime mortgage collapse was brought one step closer.

Some commentators have surmised that some socialist leftists, working through ACORN and similar groups may have deliberately promoted sub-prime lending as a way of creating economic chaos, thereby provoking a subsequent increase in government involvement in the economy.

They point to the now famous Cloward-Piven Strategy devised in the 1960s by Richard Cloward and his wife Frances Fox Piven. The “Cloward-Piven” plan involved enrolling as many people as possible onto state welfare programs. The point was to overload and collapse the state systems, leading to a Federal takeover of welfare.

Coincidentally, Rapoport was the president of the New York based “think tank” Demos, an official partner organization of the Institute for Policy Studies and a close ally of ACORN.

Barack Obama helped establish Demos in 1999-2000 and became a Trustee of the organization. Van Jones also later served as a Demos Trustee, but is currently on leave.

In 1998, Chicago DSA activist and IPS affiliate James Weinstein presided over a major Chicago “Back to Basics” conference designed to re-align the U.S. left back to “class politics”:

To explore how we (the Left) can increase our presence in the mainstream of American political and intellectual life.

In 2004, Joel Rogers from the Center On Wisconsin Strategy and Robert Borosage from IPS, enlisted DSA friendly Steelworkers President Leo Gerard and SEIU President Andy Stern, to propose a new alliance of labor, environmental groups, business and “social justice” leaders – the Apollo Alliance. The Alliance, which soon included over 200 supporting organizations, released a report “High Road or Low Road? Job Quality in the New Green Economy” arguing for a ten-year program of investment in a “clean energy, good jobs” economy.

Joel Rogers was the Alliance’s founding chairman and continues to serve on its board. Borosage is also a board member, as is Leo Gerard. John Podesta from the Center for American Progress also serves, but took a break while co-chairing President Obama’s “transition”, where he:

“coordinated the priorities of the incoming administration’s agenda, oversaw the development of its policies, and spearheaded its appointments of major cabinet secretaries and political appointees.”

Podesta also looked after another Apollo Alliance board member Van Jones, giving him a job with the Center for American Progress when Jones was forced to exit the White House.

Thigpenn is a former member of the Maoist leaning Black Panther Party, but that’s pretty mild by Apollo standards. The former head of the New York Apollo Alliance Jeff Jones, once led the terrorist Weather Underground Organization with his and President Obama’s ‘s mutual friends: Bill Ayers and Bernardine Dohrn.

It’s a safe bet that a good portion of the “stimulus package’s” $80 Billion dollars will be going to Van Jones’ Green For All in San Francisco, to Anthony Thigpenn’s “environmental anti-racism” trainers in Los Angeles and Jeff Jones’ former crew in New York. 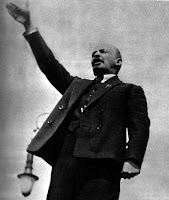 Any good Leninist will tell you: It is not gaining power that is important, it is the KEEPING of power.

Joel Rogers’ New Party, modeled the movement that put Obama in power. His Apollo Alliance provides a means for holding that power.

It is essentially a massive patronage system, where huge amounts of taxpayer’s money is channeled into radical led “green” camouflaged mass organizations.

These “green” armies will be the vote herders of the future. They will confront the Tea Party movement and other patriots on the streets of America. They will be the paramilitary armies used to intimidate the very people who fund them.

In a January 2 2009, tribute to late Democratic Socialists of America founder Michael Harrington, Gerry Hudson of the Apollo Alliance/SEIU/DSA wrote:

It’s tragic for so many reasons that Michael died too young; his voice and his wisdom are sorely needed. How he would marvel at the election of Barack Obama and the promise that this victory affords all of us on the democratic left! He is sorely missed. But were he alive, I would hope—and expect, that he and others who are informed by this vision of democratic socialism would join with us in SEIU as we seek to take advantage of a moment most of us have spent our lifetimes only dreaming of.

Joel Rogers is the glue that ties many of these threads together – Institute for Policy Studies, Democratic Socialists of America , ACORN, SEIU, New Party, the Apollo Alliance – even possibly the sub-prime mortgage crisis.

I believe, had there been no Joel Rogers, there likely would have been no President Barack Obama.