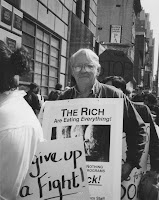 The late sociologist Richard Cloward, was together with his wife, Frances Fox Piven, the originator of the famous Cloward Piven Strategy.

Allegedly adopted by ACORN and other groups on the left, the strategy involved deliberately loading as many people as possible onto state welfare rolls, to the point of ensuring the system was bankrupt. Then the Federal Government would be forced to step in to take over local welfare provisions.

According to Democratic Socialists of America’s Democratic Left of Fall 2001, page 17:

In 1966, Richard helped found the National Welfare Rights Organization, the protest movement of poor women. Its goal of winning federalization of Aid to Families with Dependent Children (AFDC) by building the local welfare rolls to create fiscal and political crisis very nearly succeeded. Instead, Congress granted fiscal relief to states and localities through a new federal relief program called Supplemental Security Income (SSI). SSI was one of the most important federal social policy innovations in the post-World War II period.

It has long been known that Frances Fox Piven is a leading member of the Marxist-based Democratic Socialists of America, however until now Cloward’s affiliation to that organization has (to my knowledge) never been proven.

Here is the evidence that Richard A. Cloward too, was a D.S.A. member. From January/February 1991 issue, page 16:

Just confirming what many have long suspected. You saw it here first.

One thought on “Proof at Last – Richard Cloward was a “DSAer””