Now That We Agree Deflation Is What’s Coming, Is Hyperinflation Right Around The Corner?

Look Just How Unimportant U.S. Manufacturing Has Become To The World Economy

Watch For Screaming When The Dollar Index Falls To 80.00

Why Must The Media Keep Trotting Out Greenspan And His Economic Lunacy?

$1.1 Trillion Has Now Vanished From Money Market Funds, But Nobody Really Knows Where It Went

Believe It Or Not, Freddie Mac Is Still Promoting No-Down-Payment Mortgages

Democrats use schools bill to try to salvage jobs effort

Riding a Tide of Red Ink

Morning Bell: Another Victory on the Road to Repeal

AP: Reaganomics is the answer

Are Insane Economics the True Opiates of the American People?

GEITHNER: UNEMPLOYMENT UP BEFORE DOWN

Federal Debt and the Risk of a Fiscal Crisis

Four Deformations of the Apocalypse

America’s new debtor prison: Jail time being given to those who owe.

I have contended for some time that Barack Obama owes his political career to three marxist organizations, Communist Party USA, Committees of Correspondence for Democracy and Socialism and Democratic Socialists of America.

Of the three, Obama’s decades old ties to Democratic Socialists of America are most easily documented.

Part of this support has come in the form of favorable media stories about Obama and in orchestrated attacks against his opponents. It is no coincidence that several members of the recently exposed, pro-Obama JournoList had close ties to D.S.A.

Harold Meyerson is both a leading U.S. journalist and a vice chair of Democratic Socialists of America.

Meyerson is an op-ed columnist for the Washington Post and is the editor-at-large at The American Prospect.

While not an identified member of JournoList, Meyerson is professionally and politically associated with several.

On April 6, 2010, a seminar “Labor, the Left and Progressives in the Obama Era” was held at Georgetown University – further evidence of D.S.A.-JournoList collusion in favor of Obama.

After the success of health care reform, what’s next on labor’s agenda? How can the labor movement grow and engage with a progressive movement that speaks to the Obama era? What is the role of younger workers, workers of color and women? Is there a new “New Deal” on the horizon?

One of the speakers above, Gerry Hudson, has written how the late founder of D.S.A., Michael Harrington would view the election of Barack Obama:

It’s tragic for so many reasons that Michael died too young; his voice and his wisdom are sorely needed. How he would marvel at the election of Barack Obama and the promise that this victory affords all of us on the democratic left! He is sorely missed. But were he alive, I would hope and expect that he and others who are informed by this vision of democratic socialism would join with us in SEIU as we seek to take advantage of a moment most of us have spent our lifetimes only dreaming of.

It should come as no surprise to learn that Harold Meyerson was one of the first, if not THE FIRST, journalist to promote Barack Obama outside of his adopted state of Illinois.

In March of 2004, a few days before the Illinois Democratic senatorial primary, I wrote a column for this page headlined “A Bright Hope in Illinois.” It was, I believe, the first column for a daily newspaper outside Illinois devoted to a rising young pol named Barack Obama. Bolstered by polling that showed Obama to be the clear leader in the race, I fearlessly predicted that he’d become Illinois’ next senator and quoted the assessment of Jan Schakowsky, the Democratic member of Congress from Chicago’s Gold Coast district, that Obama would “march right onto the national stage and the international stage.” 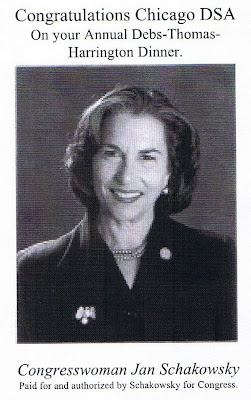 This is what Stanley Meyerson wrote about Barack Obama in the original March 12, 2004 Washington Post article. The narrative that would put Obama in the White House is clearly already in play. Meyerson touches all the bases that would be repeated endlessly in the media from 2006 to 2008:

You’d think his name alone would keep him from winning: Barack Obama. Put an “Obama for Senate” bumper sticker on your car and the dyslexic or myopic might just try to punch you out.

Yet, three days ago, in its last pre-election poll before Tuesday’s primary for the open U.S. Senate seat in Illinois, the Chicago Tribune reported that Obama, a 42-year-old state senator, had opened a wide lead over the six other candidates vying for the Democratic nomination to succeed the departing Peter Fitzgerald…

Organization men are a staple of Illinois politics, of course, and investment bankers seem poised to take over the Senate in our plutocratic age. Obama, by contrast, is a candidate who all but defies categorization — and who would certainly mark a radical departure for the stodgy Senate…

But that scarcely begins to describe the distinctiveness of Obama. His father was Kenyan, his mother a white girl from Kansas. The two met and married at the University of Hawaii in 1960 (when miscegenation was still a felony in more than half the states). His father disappeared from his life when Obama was 2; his mother raised him in Hawaii and Indonesia. Obama went to college at Columbia, then moved to Chicago for five years of community organizing in a fusion of civil rights crusading and Saul Alinsky house-to-house plodding. He then went to Harvard Law School, where he became the first black president of the Law Review; returned to Chicago to run a program that registered 100,000 voters in the ’92 elections, entered a civil rights law firm and became a senior lecturer in constitutional law at the University of Chicago.

Seven years ago Obama was elected to the state Senate from a district in Chicago’s South Side. In Springfield, he developed a reputation as an impassioned progressive who was able to get support on both sides of the aisle…

In October 2002, Obama made an eloquent case against the impending war in Iraq at a rally in downtown Chicago. Declaring repeatedly that “I don’t oppose all wars,” he distinguished what he termed “a dumb war, a rash war” from a string of just and necessary wars in which the United States had engaged. He is surely the progressives’ darling in the field, drawing enthusiastic support from white Lake Shore liberals as well as the African American community. But he’s also won the endorsements of virtually all the state’s major papers, many of which — such as Chicago’s Tribune and Sun-Times — note their disagreement with him on the war but hail him as a brilliant public servant nonetheless. Should Obama win, says Rep. Jan Schakowsky of Evanston, who backs his candidacy, he’d “march right onto the national stage and the international stage…”

While practicing law in the early 1990s, Obama wrote “Dreams From My Father,” a memoir and meditation of genuine literary merit that depicts his understandable quest for his identity — a quest that immersed him in the world of Chicago’s poor and that took him to a Kenyan village in search of a father he never knew. It’s a story of worlds colliding, fusing and redividing, of a life devoted to re-creating in a grittier world the idealism and sense of community of the early civil rights movement, which provided the backdrop for his parents’ marriage.

If by “American” we mean that which is most distinctive about us and our ideals, if we mean it to refer to our status as a nation of immigrants that could yet become the world’s first great polyglot, miscegenistic meritocracy, then Barack Obama, if elected, would not only become the sole African American in the Senate: He would also be the most distinctly American of its members.

Here’s Stanley Meyerson plugging Obama outside the Democratic Party convention in Denver in 2008.

It is clear that D.S.A. has had “the fix” in for Obama, for some years.

Would Barack Obama be president of the United States today without JournoList and a sympathetic “progressive” media?

Would JounoList have existed, or have been as influential, without Democratic Socialists of America?

Does America owe its current president, at least partly, to D.S.A. – a few thousand strong Marxist organization that most voters have never even heard of?

Lt. Col. Allen West (Ret.) is running for Congress in a heavily Democratic District in Florida.

Despite that, he has a very real chance of victory.

While serving in Iraq, Lt. Col. West got into some trouble over the way he interrogated a prisoner.

Here is his side of the story.

Now tell me, do you now think more or less of the man?

If its more – I’m sure his campaign could always do with a few extra dollars.