Why We Are Totally Finished (Hat Tip: Brian B.)

13 States That Just Got Slammed With Massive Layoffs

The Fed Is Officially Botching It

The Fed’s Biggest Bubble: US Treasuries

Hyperinflation is a Fiscal, Not Monetary Phenomenon

Forget Debt To GDP, It’s Debt To Revenue That Matters–And The U.S. Is The Worst

Wheat, Guns, and ObamaCare: How the Commerce Clause Made Congress All-Powerful

The End of Global Banking Misery?

Hyperinflation is a Fiscal, Not Monetary Phenomenon

BHP Sounds The Alarm On Global Growth And Commodity Prices

Are Bears Getting A Little Tired, Or Are Investors Betting On An Imminent Economic Hail Mary?

Is It Frightening That Spain Is Using Social Security To Fund Its Bond Sales?

Ahead of the Bell: Jobless claims

We Killed The Goose That Laid The Golden Egg And Now The Number Of Americans Receiving Long-Term Unemployment Benefits Has Risen A Whopping 60 Percent In Just One Year (Hat Tip: Jean Stoner)

The Recession Is Over, Welcome To The Depression (Hat Tip: Jean Stoner)

Doctors Pushing Back on Obamacare Consolidation

The Report on Stimulus CBO Wishes Would Go Away

Roubini: Third-Quarter US Growth to Be ‘Well Below’ 1 Percent

BIDEN READY FOR MORE SPENDING: ‘This is a chance to do something big, man!’

One in 10 mortgage holders face foreclosure

Jobless Claims Drop for 1st Time in a Month

Hussman Funds – Weekly Market Comment: Why Quantitative Easing is Likely to Trigger a Collapse of the U.S. Dollar

Two People Sign Up for Obamacare in New Jersey

Investors Have Withdrawn a Staggering $33.12 Billion from Mutual Funds in 2010

The Road to Stagflation

Unfortunately the date and location of this audio is unknown. It was uploaded on December 6, 2009 and is allegedly a speech by Nation of Islam leader Louis Farrakhan.

It is an “Abu Bakr Siddiq Abdulmu Hammad” Production: “God is with us.”

Listen for the phrases:

“The cracker don’t have no authority over me.”

“Since I’ve been on this tour, I’ve been telling the people – that God wants to give you the promised land.”

“I can never forget Iran – Iran has beautiful Muslims. You don’t know how much our Muslim world is anxious to see the enemy handcuffed. …the enemy – the British and the Americans have created all of that havoc in the Islamic world. And imagine us rising up in America at a time when there’s no superpower to deal with us and God with us – is the power that’s gonna deal with America.”

Any independent verification of this tape would be much appreciated.

And Al Sharpton has a nightmare. Gives me the warm fuzzies to know that King’s niece will speak at the 8/28 rally. She is a brave woman and a hero to me. 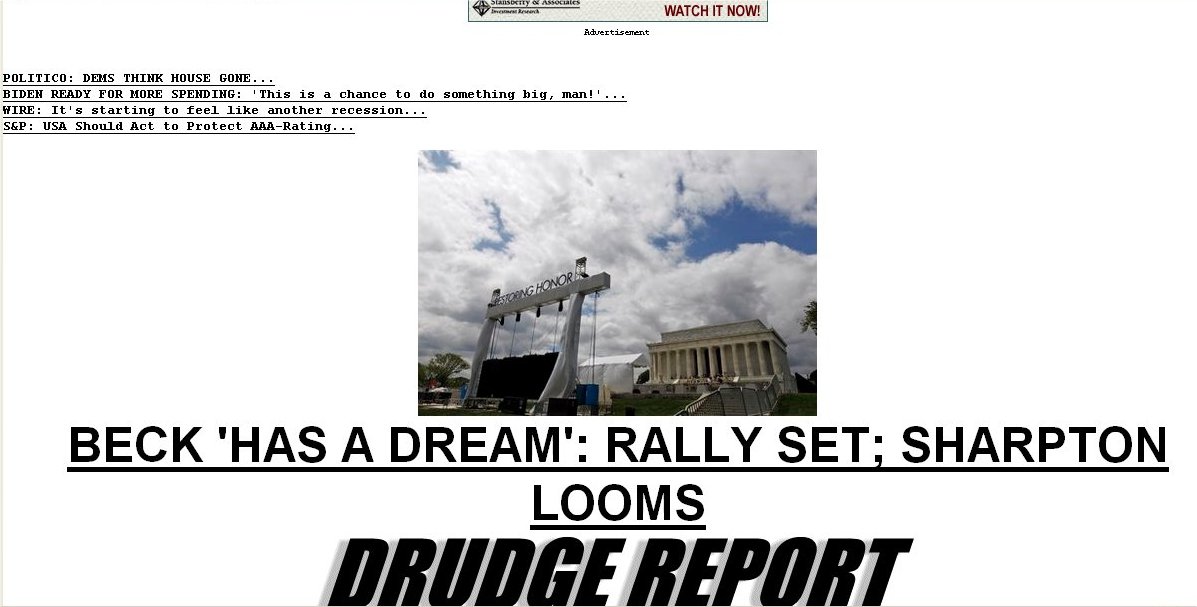 Glenn Beck is bringing the nation back to God. Be at the 8/28 rally…