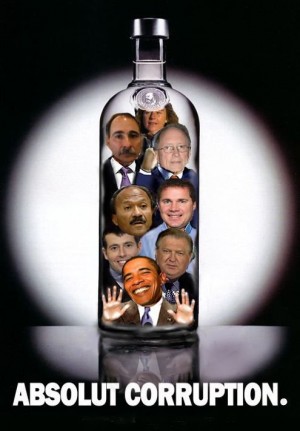 Senate Majority Leader Harry Reid (D-NV) has presided over the Senate for the past four years and we’ve just learned today that his current Lame Duck session is “RIGGED.” Color me surprised!

A hot mic picked up Senator Michael Bennet’s words… “It’s all rigged. The whole conversation is rigged. The fact that we don’t get to a discussion before the break about what we’re going to do in the lame duck. It’s just rigged.”

Welcome to our world Senator Bennet. We’ve known for quite a while that our government apparatus is rigged.

Take for example, the Food Safety Bill which is designed to take over our food supply and grow government by adding 17,000 more employees. It passed in the Senate today – against the will of the American people, and is sure to pass the House before the end of the year. Why does our government want to take over our food supply? Because they’ve already co-opted Monsanto and the Food Takeover Bill seals the deal.

The government organization chart illustrates that the position of ‘Office of Foods Deputy Commissioner’ is Michael Taylor, who was appointed to this position by President Obama. Mr. Taylor was the Vice President for Public Policy at Monsanto. How cozy is that?

The incestuous relationship between our government and corporations does not represent America’s free-market system. It’s Socialism straight up. Banks, food, healthcare, home mortgage loans, student loans, GM, AIG… the list goes on and on.

Clear thinking Americans have learned that all of it is “rigged” and it warms our hearts to see that there’s a Senator who is catching on and who actually said it out loud even though he didn’t realize his words were being picked up by the microphone.

We yearn to hear other Senators and Congressmen speak the truth… at a microphone that they know is on.

Minnesota Secretary of State Mark Ritchie is regarded as a “non-party friend” by the Communist Party USA.

So highly does the Communist Party regard Mr. Ritchie, that he has been allowed to attend a high level “not to be publicized” Party meeting in Minneapolis.

Some of the Communist Party members at this meeting, later supported Ritchie in his Secretary of State election campaigns. One of them, labor leader Mark Froemke, went on to support two of Ritchie’s Democratic-Farmer-Labor-Party colleagues – Al Franken and Mark Dayton in their respective election campaigns.

As Minnesota Secretary of State, Mark Ritchie’s job includes overseeing the State’s electoral recounts. In 2009, following a very controversial recount, Ritchie awarded a U.S. Senate seat to Al Franken. Currently Ritchie is overseeing another recount which could give Mark Dayton the Minnesota Governorship.

In this column, I post extracts from a four-page document I obtained during my research in the United States. The document was marked “Not for publication.” As you read this post you will understand why. Click on any scanned excerpt of the document to enlarge it for easier reading. The documents in full and unedited are viewable on Mark Ritchie’s page at our sister site KeyWiki – direct link here.

Note in the first scan that Mark Ritchie is named as a “non-party friend,” an honor bestowed only on the most trusted and respected of Party allies. Ritchie was allowed to spend the entire morning of an important Party meeting, addressing comrades from all over the U.S.

Ritchie and three of the Communists had just returned from the “Battle in Seattle” – the mass riots that broke out around the World Trade Organization meeting in that city.

Though he was an official U.S. delegate to the W.T.O. meeting, Ritchie gloats that the rioting and protests “stopped the WTO,” and that “It is a tremendous victory.” 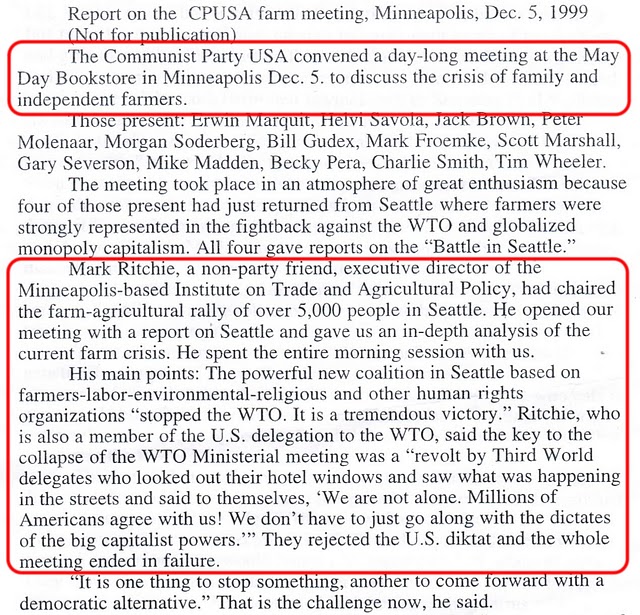 Check the profiles of several of the Communist Party members listed by clicking their blue linked names below.

Ever the skilled propagandist, Mark Ritchie then advises the Communists on how best to present their message – to use the more emotive term “food” rather than the harder sounding “agriculture.”

Mark Ritchie points out a target for activism, the proposed merger of Agri-giants “Continental” and “Cargills.”

This article was later done by Tim Wheeler.

Here is a quote from it:

“Karl Marx, Frederick Engels and V.I. Lenin devoted much study to the “agrarian question.” To prepare this report, I read for the first time parts of Volume III of Capital. “This natural productivity of agricultural labor (which implies here the labor of gathering, hunting, fishing, cattle raising) is the basis of all surplus labor,” Marx writes. “So is all labor primarily and originally directed toward the appropriation and production of food. Originally, agricultural and industrial labor are not separated. The second joins the first.” For Lenin, the strategy that underlay the Russian Revolution was the alliance of workers and the poor and landless peasantry. In the U.S., for much of the past century, the strategic goal of left and progressive movements was the creation of a Farmer-Labor party.”

Several resolutions were agreed to at the end of the meeting.

In the third, Mark Froemke agrees to try to organize an alliance of farmer and labor organizations.

Next came discussions of a march on Washington D.C., by the same coalition that had “staged” the “Battle in Seattle.” Niel Ritchie, (spelled incorrectly in the report), Mark Ritchie’s brother, is also revealed as a Communist Party contact. Niel Ritchie is now a leader of the League of Rural Voters.

The document is signed by former People’s Weekly World editor, Baltimore/Washington State based dairy farmer Tim Wheeler – son of Donald Niven Wheeler, a communist and once a Soviet spy inside the World War 2 Office of Strategic Services.

Mark Ritchie’s ties to the Communist Party USA did not end there. In 2006 and 2010, Erwin and his wife, Doris Marquit, donated to Ritchie’s Secretary of State campaigns. In 2006, Erwin and Doris Marqit, Peter Molenaar and Mark Froemke were all listed as Mark Ritchie campaign supporters. 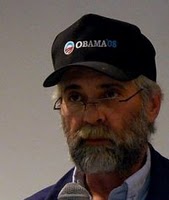 In October 2009, Mark Froemke was the Fargo Moorehead organizer for a 10 Days of Labor Action campaign for Minnesota gubernatorial candidate Mark Dayton.

Froemke did more work for Dayton in 2010. The pair were apparently very close as demonstrated by the Froemke/Dayton “man hug” shown in the January 2010 photo below. 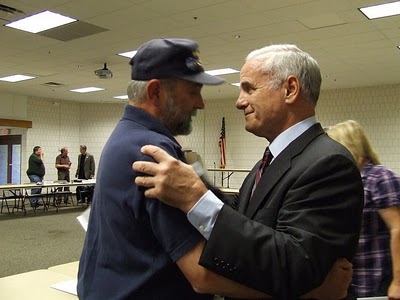 The controversial 2009 recount. which confirmed Al Franken as a U.S. Senator, was closely followed by the Communist Party USA.

The Communists were well aware that their Democratic allies, desperately needed Franken’s 60th seat in the Senate. This was the “magic number” required to ensure that “progressive” legislation, such as the pro-union “Employee Free Choice Act,” could be passed without the inconvenience of a Republican filibuster.

“Whether Minnesota labor’s massive effort to mobilize members in the 2008 elections was a success will ultimately turn on the results of a recount in the U.S. Senate race, Labor 2008 coordinators say.

While most AFL-CIO and Change to Win unions backed Democratic-Farmer-Labor (DFL) challenger Franken, a few labor organizations–notably the Carpenters and Pipe Trades–endorsed Coleman. After all the results were turned in, Coleman led Franken by only 215 votes out of just under 3 million cast. An official recount began Nov. 18 and could take a month, Secretary of State Mark Ritchie said.

Franken’s race against GOP incumbent Norman Coleman is important nationally. To get pro-worker bills through the Senate, workers and their allies need 60 votes, out of 100 senators, to cut off GOP filibusters. That includes a presumed GOP talkathon against the Employee Free Choice Act, which is designed to help level the playing field between workers and bosses in union organizing and bargaining first contracts…

Independence Party candidates made the difference in the Bachmann and Paulsen races and definitely affected the Senate race, said Mark Froemke, president of the West Area Labor Council that spans the western half of the state. ‘The Independence Party got a better number than I would have expected in this area,’ he said.”

It is also very significant that the Communist Party USA, an ultra secretive and highly paranoid organization, trusts Mark Ritchie enough to admit him to a high level secret (“not for publication”) meeting.

If Mark Ritchie is willing to keep his connection to the Communist Party hidden from Minnesota voters, what other deceptions, or dishonesty, is he capable of? If he was willing to help sabotage the 1999 WTO talks in Seattle, while serving as an official delegate, why should anybody trust him?

Mark Ritchie, the Communist Party’s “non-party friend” was tasked with overseeing both elections.

Just who is Mark Ritchie actually working for? Where do his true loyalties lie? Minnesota voters deserve to know.

Secretary of State Ritchie needs to answer some serious questions.

The integrity of Minnesota’s voting system depends on it.

WikiLeaks to Take on Private Sector?

The Road to Fascism

Don’t Look Now, But The US Dollar Is Tanking Hard Too (Hat Tip: Jean Stoner)

YEAs —73 (CALL THEM and POLITELY EXPRESS Your Feelings!)