Anti-government protesters march to the presidential palace in Sanaa February 13, 2011. 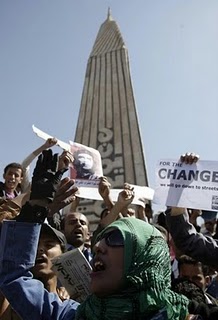 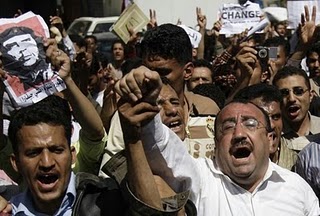 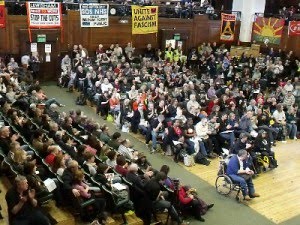 Allen West: “We gotta make the hard decisions.”
FOX News Host: “It’s not gonna be popular.”
Allen West: “Well you know something? When I was a commander in the army, there were some times you made decisions that weren’t popular, but they were based upon the fact you wanted to keep your men alive in combat.”

One of the advantages to being observant is knowing the difference between imagination and reality. My ears no longer function as they did in my youth. When the room should be quiet I hear Starlings chirping, lots of them; a cacophony of sound which never leaves. I suppose others hearing a similar noise would suspect a fan belt was causing the irritating high pitched noises, looking to oil the offending part; but I know the difference and accept my hearing issues as part of growing old.

Spring is just around the corner and we’ve been told the economy will blossom, jobs will magically appear and the recession will be nothing more than a vague memory. Pardon my skepticism; but are we listening to chirping in our ears or reality here? A Reuters article by Emily Kaiser in the Chicago Tribune glows with optimism:

The White House assumes the U.S. economy will fully recoup losses incurred in the latest recession by 2017, putting it at odds with many private economists who believe the downturn left permanent scars.

In its budget plan released on Monday, the Obama administration envisions economic growth accelerating in 2012 and remaining above average through 2017.

The good news fails to mention this administration’s best efforts to kill off our energy industry, our means of production in a competitive market place. There is no mention of the Obama administration’s efforts to re-write the tax code eliminating “dual capacity” tax protections for oil and gas producers as Michael Economides wrote in his piece, ‘Dual Capacity’ Tax Elimination: Another US Energy Harakiri. (Gotta love a name like Economides; reminded me of Euripides and Eumenides, the Greek tailor joke.)

If the White House succeeds in adding an additional $36 billion tax burden to U.S. fossil fuel producers, China will become even better equipped to not only meet the demand of its own citizenry, but also dictate the price of essential commodities. That would mean less-secure, more expensive energy for America; thus compromising our ability to maintain our way of life. Some think that elimination of “dual capacity” taxes may even be a violation of the World Trade Organization (WTO) rules.

In contrast to Treasury Secretary Timothy Geithner’s promise that the president’s proposed corporate tax reform would create a “level playing field,” the White House’s tax plan would handicap U.S.-based firms and enable China’s rule to be even more pervasive in the global energy markets. Energy means power and not just the one generated by it for electricity and because of bad policies in the US we are witnessing the largest transfer of power in the history of the modern world. And all without a fight.

For the US economy to survive, much less blossom, the Obama administration will have to get out of the way and stop shooting our legs out from under us. Obama’s administration fabricated a report in order to place a “moratorium” on drilling in the Gulf and shut down thousands of jobs to satisfy the environmental whacko community. The EPA, under the same sense of purpose, has targeted energy production facilities and users by mandating extremely expensive changes to coal fired and natural gas electricity generation facilities further driving up the cost of doing business while at the same time making it tougher to compete in the world market.

America’s ears might be hearing something as spring rolls around; but it’s certainly not the sound of financial recovery. The air might be filled with promises of prosperity, bells ringing and Starlings chirping; but no, what we’re hearing are the wheels of machines grinding to a halt for lack of oil. If we turn a deaf ear to these issues we face a rather bleak future.