One thing is for certain. The more progressives attack Fox News and their icons, the more popular Fox becomes. It’s like throwing gasoline on a media wildfire, thinking that it will extinguish the flames of information. Information that is the last flame of news in the US that is even remotely trustworthy from a major media outlet. A flame that outlets such as Media Matters would love to snuff out. News that is in tune with American citizens and not wildly out of step with their core beliefs.

Isn’t it ironic that the more Soros’ funded groups and Obama/union backed entities attack Glenn Beck, the more consistently his show ratings are at the top of the chart compared to ALL cable outlets? See what happens when you use inflammatory rhetoric to attack conservative ideals? You set America’s thirst for real news on fire. Fox’s ratings and profits have risen for years simply because they give Americans what they want – the truth. The progressive/Soros/Obama/union agenda – not so much.

Given the growing strength of Fox, Roger Ailes has the ability, courage, conviction and tenacity to stand behind hosts such as Glenn Beck and Juan Williams. Beck strikes me as an unabashedly honest and forthright man. A reluctant leader who has one foot in the media spotlight and the other in righteous humility. Research has been key in his success. The facts speak for themselves and Beck merely brings you the facts. He continually tells his viewers to research it for themselves and in doing so, his viewership learns the truth firsthand. They realize just how much the other media outlets have sanitized their news and how they have been politically manipulated. Facts and truth are a winning hand for Ailes and he is calling the MSM’s bluff. In fact, the more the progressives attack, the larger the contracts and viewership for Beck and Hannity become. Beck and Hannity are targets for progressive hatred and campaigns, but with a whole nation behind Fox News, Beck and Hannity and with a hunger for honest news, how can Fox not come out on top?

As you can see from J.P. Freire’s article on Fox News and the recent attacks, Fox and Roger Ailes have endured. Fox News has consistently made money and won in ratings. Even when well-funded progressive groups attack, Fox and Ailes have stood fast and kept (and rewarded) prime talent like Juan Williams. Williams is a great example of what Ailes’ plans to do with Fox News – create a TV channel of political lightning rods that drive the media and viewer’s attention to Fox News.

Whether we are talking about Fox News, Roger Ailes or Glenn Beck, the attacks have been never-ending and monumental. From Media Matters to MSNBC, the left’s bought-and-paid-for media lapdogs have lined up to take a whack at Fox hoping to take them down and garner their proverbial 15 minutes of fame. In the face of well-funded attacks, vitriolic hate and progressive dogma, Fox has won every time. Gee, wonder why that is? Could it be that Americans are actually smart enough to know when they are being lied to? Could it be that, as a nation, we believe in the Constitution and the ideals of our founding fathers? Could it be that we are still a nation of believers – believers in God and country – and that we reject the lawlessness, the corruption and the downright evil we see coming from our politicians and government? One wonders why the left can’t or won’t see this. From the Washington Examiner:

It’s not just the pot and the kettle. By spinning its wheels this way, Media Matters is just shilling for Fox at this point. Maybe they should take a breather.

Give it a rest, Media Matters… Americans know who foots your bill and pulls your strings. You’ve made yourself irrelevant and frankly boring. The whole progressive movement has become totally predictable, which is why they are reverting to community organizing and violence. To quote Andy Stern, “If we can’t use the power of persuasion, we will use the persuasion of power.”

In fact, progressives are being caught on YouTube all over the place railing against Fox, the Koch brothers, Justice Thomas, Justice Scalia, Glenn Beck, Tea Partiers, etc. and in general showing that they basically are full of hate, looniness, anti-Americanism and Marxist leanings. I guess they don’t realize that they are just showing the world who they really are and what they stand for – finally…

From our buds at another Soros favorite, MoveOn.org:

And the irony — using inflammatory material to extinguish a flame of truth — seems to be completely lost on them. So go ahead guys, keep up the good work, throw more gas. 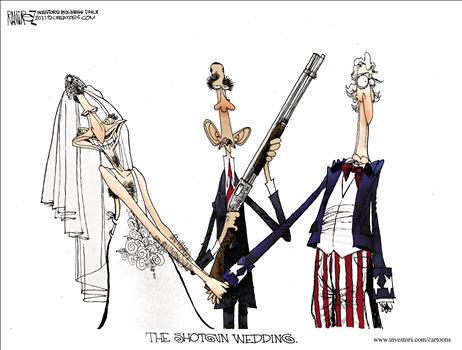