Commentator J.R. Nyquist on the recent BRIC Summit and a probable Russian/Chinese attack on the US dollar. 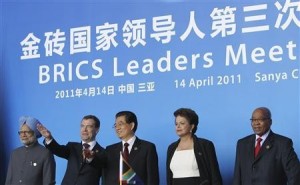 The BRIC Summit, held on 14 April in Sanya (People’s Republic of China), brought together the leaders of Brazil, Russia, India, China and South Africa. The key to understanding the summit may be found in the joint statement, which refers to “the inadequacies and deficiencies of the existing international monetary and financial system….” Without question, this statement is about eliminating the U.S. dollar as the global reserve currency. Therefore, the BRIC countries are asking for “the reform and improvement of the international monetary system, with a broad-based international reserve currency system providing stability and certainty.”

It appears, with the addition of South Africa to the BRIC alliance, that gold is being contemplated as a means for backing a new reserve currency. China and South Africa are the two leading gold-producing countries. Russia is the sixth leading gold producer, and Brazil is 15th. But this is not an easy game to win, because the dollar’s position is almost unbeatable. Furthermore, the United States, Canada and Australia have steady gold production. But here, at the BRIC Summit, a serious challenge is being mounted. If the dollar is to be overthrown, a humble beginning must be attempted. And who knows what countries will join the BRIC Summit next year?

The United States appears to be a well-ordered and stable society. How could anyone seriously hope to challenge the economic might of America? Yet, there is reason to worry that America’s strength has long rested on a false foundation. Slackness, intellectual laziness, obesity and cultural degradation – are causes for serious concern. Under a regime of false expectations and artificial stimulants, the United States has been weakened financially, and is ill-prepared for further trouble. Yet trouble may be on the horizon. (Rumors of an impending large-scale terrorist attack, greater in effect than 9/11, continue to make the rounds).

In 1998 Russian Foreign Minister Yevgeny Primakov, a strategist and master spy, conceived of an economic alliance between Russia, India and China. The purpose of this combination was to counter the international influence of the United States. In subsequent years Brazil was added to the combination; yet the anti-American purpose of the idea should be underscored. By now it should be apparent that Russia and China intend to launch an attack against the U.S. dollar.

Do we yet realize that such an attack is possible? And have we reckoned the political consequences? As these words are written, a small minority of persons inside the United States are trying to stir up a revolution. If the economy continues to function, these people have no chance of success. But if the U.S. economy collapsed, the extremists of Right and Left would gain millions of followers. The greatest potential for harm would then come from inside the country, through internal conflict. Political revolutions occur from time to time in all states; and they are to be dreaded.

The strategist and historian Viktor Suvorov was recently asked in an interview whether he saw signs of revolution in today’s Russia. His reply was characteristically wise. “Certain people prepare revolutions,” he said, “many accomplish them, but the fruits always go to the bastards! In all the past revolutions throughout the world, those who join with an open heart usually die.” Suvorov then quoted the famous remark that, “Revolutions devour their own children.” The same would hold true if a revolution took place in the United States.

It is true, of course, that people are becoming angry at present-day policies. However bad things are, they can be much worse if a revolution begins. Actions born of anger engender counter-actions born of anger – and a vicious cycle of violence invariably follows. Under current strategic conditions, there is a further consideration. An economic disruption, followed by a political upheaval in the United States would tend to the spontaneous disarmament of the country. The nuclear deterrent could cease to function, with potentially fatal consequences for hundreds of millions of people.

The potential for a revolution in the United States has long been a topic of discussion by strategists in Moscow and Beijing. In fact, the breakdown of America’s economy leading to a revolution was discussed by Soviet bloc leaders as far back as 1967, and Soviet strategy envisioned this eventuality as the key to victory over the United States. Even more alarming: There is a growing body of evidence suggesting that the United States, with all its self-made problems, has been pushed deeper into crisis by the hidden hand of Moscow. Readers should be directed to Kevin Freeman’s June 2009 report titled, Economic Warfare: Risks and Responses. Freeman outlines a three-phased attack on the U.S. economy which he suspects is already underway. The First Phase involves a “speculative run-up in oil prices” that generate as much as $2 trillion of excess wealth for oil-producing nations. Second comes “a series of bear raids targeting U.S. financial services firms.” Third is a “direct attack on the U.S. Treasury and U.S. dollar.” Freeman explained that, “A focused effort to collapse the dollar by dumping Treasury bonds has grave implications including the possibility of a downgrading of U.S. debt forcing rapidly rising interest rates and a collapse of the American economy. In short, a bear raid against the U.S. financial system….”

This is not wild speculation. The Chinese regime is a Communist dictatorship, and the Russian Federation is run by the KGB (together with former Communist Party structures). Do we imagine they will not take advantage of the situation? As the Federal Reserve has massively increased the money supply by an estimated $12.8 trillion in economic stimulus, the system’s vulnerability is without parallel. Put this together with massive annual Federal budget deficits and you have the perfect recipe for disaster. “Based on the assumed nature of Phase One and Phase Two,” noted Freeman, “a Phase Three attack would likely involved dumping of U.S. Treasuries and a trashing of the dollar, removing it from reserve currency status. This is clearly foreseeable as a risk….”

The sequence of unraveling is easy to follow. If you dump U.S. Treasuries, how will the U.S. dollar remain the global reserve currency? In that event, how will the United States finance its deficit spending? Interest rates would skyrocket, with predictable consequences. “Pushed to the limit,” Freeman wrote, “the U.S. dollar would follow the path of the German currency … following defeat in World War I.” The danger should be perfectly clear, and Freeman spells it out so that even a simple person could understand: “U.S. military strength hinges on economic well being and innovation. These facts are well understood by our enemies, prompting the desire to change the balance of power.”

The BRIC summit testifies to the desire of Russia and China to undermine the dollar. However crazy you think such a scheme, they are nonetheless pursuing it. You might say it makes no sense, but you are not a “former” KGB officer or a member of the Chinese Communist Party. Do you really imagine that KGB officers and Communists are bourgeois, like you? No, they are not. They are the declared enemies of the bourgeoisie.

You may rationalize this any way you please. You can tell yourself that Communism is dead, that Russia and China are attempting to build consumer societies like our own. BRIC may sound foolish today, but tomorrow you may find your local grocery store empty and gasoline unavailable because the dollar is no longer worth anything.

JR Nyquist is one of the very few commentators to actually be prepared to name the enemy. Russia and China have long since re-united as one force against the West and the US in particular.

If the US goes down economically, will Russia and China sit on their hands and give America time to recover?

Or will they strike and strike hard, when the “main enemy” is on its knees.

If you believe Beijing and Moscow would pass up this great opportunity, maybe you should leave all your doors unlocked and put a sign on your lawn advertising the fact.

Let me know how you get on.

One thought on “Say “Goodbye” to the Dollar”