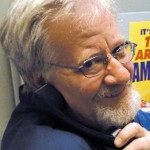 The US left wants to legalize millions of illegal immigrants, because they know that the vast majority will vote Democrat. In these times of high unemployment, resentment among many unionized and unionized workers and the unemployed against illegal immigrants is high.

Therefore the left is deliberately trying to bring all these groups into an alliance behind Barack Obama and the Democrats and against the G.O.P.

Hundreds of thousands across the nation marching and rallying this May Day will be fusing two of the great struggles of the day – the fight for workers’ rights and the fight for immigrant rights.

The labor movement, rejecting the notion that immigrants are taking jobs away from the native-born, has jumped with both feet into the fight for immigrant rights.

“Workers’ rights and immigrant rights are connected,” said James Parks, a spokesperson for the AFL-CIO. “CEO-backed politicians are targeting all working people – including immigrants – with their corporate-sponsored political agenda and continuing power grab.”

In the wake of the massive and prolonged demonstrations in Wisconsin it is no surprise that almost all the marches and rallies will demand protection for collective bargaining rights.

Rally organizers stress, however, that in addition demonstrators will call for comprehensive immigration reform, starting with passage of the Dream Act. The Dream Act would provide undocumented young people with a route to legal residency through either higher education or service in the military.

“These May Day marches are driven by the same spirit of activism and commitment that drives our brothers and sisters in Wisconsin and every other community that is now fighting back against the attacks on working people,” said AFL-CIO President Richard Trumka.

Trumka is the featured speaker at a rally in Milwaukee that the labor federation expects will draw at least 60,000 people. Unions and their allies will use the rally to boost recall drives now underway against Republican senators who stripped workers of their collective bargaining rights…

“Corporate greed. Working people rallying in the streets. It sounds like Madison, Wisconsin,” said Jorge Ramirez, president of the Chicago Federation of Labor. But it’s actually the scene from Haymarket Square in Chicago. One hundred and twenty-five years later, working people are in the fight of their lives for the right to have a voice at work through collective bargaining.”

The national federation’s secretary-treasurer, Liz Shuler, will address the thousands of Chicago workers expected to gather on May 1 at the site of the Haymarket martyrs’ monument in Forest Park Cemetery.

March organizers in Boston are connecting their action to the fight for workers’ rights around the world. They expect thousands to demonstrate under their theme of “From Cairo to Wisconsin to Massachusetts, Defend All Workers’ Rights.”

Houston could well see one of its largest workers’ rights demonstrations ever. The Labor Council for Latin American Advancement in that city is joining with the labor and community-backed Houston United for a rally that will also demand both workers’ rights and immigrant rights.

“Now is the time to grow up as a nation,” he said, “and we need to stop bullying immigrants. We need a smart policy that is good for all workers, one that will help us recover from one of the worst economic downturns in U.S. history. Immigration reform can be the first step in that direction.”

In many cities the May Day demonstrations will bring union and immigrant rights activists together in support of ongoing local struggles.

To see how the US left cynically exploits immigrants for votes, go here.