Read all of it at The Radio Equalizer – he has the full scoop on ‘progressive derangement syndrome.’

Cliff Kincaid is one of the few journalists to take this issue seriously.

Russia Today is a virulently anti-American propaganda channel, every bit as dangerous as Pravda or the Tass News Agency were during the Cold War.

Russia Today and its American shills, are effectively agents of a hostile power and should be treated as such.

On Friday morning, June 3rd, several dozen people gathered across the street from the Jacob Javits Center on Manhattan’s west side to voice their outrage and indignation over the decision of the board of trustees of the City University of New York to grant an honorary degree to playwright Tony Kushner. The site was selected as it was the venue of the commencement ceremonies for the 2011 class of the John Jay College of Criminal Justice; the same CUNY school that saw fit to bestow the honorary degree to the Pulitzer Prize winning playwright for his literary accomplishments.

A polemical firestorm erupted a month ago when CUNY trustee Jeffrey S. Wiesenfeld, (an investment adviser and one-time aide to former New York State Governor George E. Pataki), represented the lone dissenting voice at a CUNY board meeting on May 2nd in which he expressed his vehement opposition to the nomination of Kushner for an honorary degree.

At the time, Mr. Wiesenfeld cited a litany of anti-Israel statements made by Mr. Kushner and spoke of the “disingenuous and non-intellectual activity directed against the State of Israel on campuses throughout the country, the West generally and oftentimes the United States as well.” Mr. Wiesenfeld also pointed to direct quotes that Kushner made to the media. Among them are:

“[Israel was] founded in a program that, if you really want to be blunt about it, was ethnic cleansing, and that today is behaving abominably towards the Palestinian people.” — Yale Israel Review (winter 2005)

“I’ve never been a Zionist. I have a problem with the idea of a Jewish state. It would have been better if it never happened.” — The New York Sun reporting Kushner comments made at a conference in NY (10/14/02)

Ha’aretz reporter: But you are saying that the very creation of Israel as a Jewish state was not a good idea.

“Zionism aimed as the establishment of a national identity is predicated on a reading of Jewish history and an interpretation of the meaning of Jewish history I don’t share. Insofar as Zionism is an idea that the solution to the suffering of the Jewish people was the establishment of a Jewish nation, I think it is not the right answer. — Ha’aretz (4/7/04)

“I am not a Zionist in case you haven’t noticed.” Kushner cited “the shame of American Jews for failing to denounce Israel.” – Chicago Tribune (4/10/02)

“The Israeli-built security wall should come down, the homeland for the Palestinians should be built up, with a strictly enforced peace, not enforced by the Israel Defense Forces, but by the United Nations.” – Baltimore Jewish Times (6/4/04)

“I deplore the brutal and illegal tactics of the Israeli Defence Forces in the occupied territories. I deplore the occupation, the forced evacuations, the settlements, the refugee camps, the whole shameful history of the dreadful suffering of the Palestinian people; Jews, of all people, with our history of suffering, should refuse to treat our fellow human beings like that.” – London Times (5/7/02)

“[Israel is involved in] a deliberate destruction of Palestinian culture and a systematic attempt to destroy the identity of the Palestinian people.” – New York Sun (10/4/02)

Under routine circumstances, the CUNY board “rubber stamps” nominations of this kind, but subsequent to Mr. Wiensenfeld’s address, the trustees voted to deny Kushner a degree. Displaying obvious consternation, Kushner penned a critically worded letter to CUNY Chairman of the Board Benno Schmidt and the other trustees. Admonishing them, Kushner intoned: “Did any of you feel that your responsibilities as trustees of an august institution of higher learning included even briefly discussing the appropriateness of Mr. Weisenfeld’s using a public board meeting as a platform for deriding the political opinions of someone with whom he disagrees?”

Regarding his views on Israel, Kushner wrote in the same letter, “I believe that the historical record shows, incontrovertibly, that the forced removal of Palestinians from their homes as part of the creation of the State of Israel was ethnic cleansing, a conclusion I reached mainly by reading the work of Benny Morris, an acclaimed and conservative Israeli historian whose political opinions are much more in accord with Mr. Weisenfeld’s than with mine.”

Several days later Mr. Schmidt released a statement saying the trustees had made a “mistake of principle, and not merely of policy,” in withholding the degree for Mr. Kushner from the John Jay College of Criminal Justice. In an attempt to quell widespread criticism, CUNY Chancellor Matthew Goldstein urged Mr. Schmidt to convene a board meeting on May 9th at which time the trustees reversed their previous decision and voted to approve an honorary degree for Kushner.

In an op-ed article that appeared on May 5th in The Alegemeiner newspaper, Mr. Wiesenfeld wrote of Mr. Kushner, “If his libelous statements against Israel were made by anyone outside the Jewish community, that person would be correctly labeled an anti-Semite. When you spew libel against our sole regional democratic ally for “crimes” concocted by delegitimizers, you are an anti-Semite.”

He continued, “Every nominee that has been brought before the board, during my 12 years at least, has been approved by the full board. Mr. Kushner, however, was opposed because he is an extremist. No extremist from any quarter is a good face for any University – from far left or far right.”

Today’s rally was sponsored by such organizations as the Human Rights Coalition Against Radical Islam (HRCARI), the Zionist Organization of America, the Jewish Action Alliance, American For for a Safe Israel and the Republican Jewish Coalition.

Introducing the speakers was Dr. Marvin Belsky, a retired internist and board member of HRCARI who said, “Tony Kushner and others of his ilk are just the tip of the iceberg. He represents the ongoing academic attacks against Israel and the rising anti-Semitism on college campuses. The fact that CUNY has seen fit to bequeath Kushner with an honoray degree is wedded to President Obama’s appeasement dictrine that calls for Israel to retreat to the 1967 boundaries, better known as “Auschwitz borders.” In essence, the President is promoting the ethnic cleansing of Jews from their homeland. Let’s not forget that there are 500,000 Jews living in the areas that he would like Israel to relinquish.”

Extending plaudits to Mr. Wiesenfeld as a “courageous Jewish leader who faced a tsunami of hatred for speaking out against CUNY,” was Rabbi David Algaze of the Chavurat Yisrael synagogue in Forest Hills. Condemning the CUNY board for reversing their decision regarding the honorary degree for Kushner because of “political pressure,” Rabbi Algaze said those professors who supported this decision have “blemished their own academic honesty.” Of Kushner he said, “He is not only following the Arab narrative of the Israeli-Palestinian conflict, but is ignoring history and history will come back to haunt him.”

“I am not afraid of Tony Kushner, but I am afaraid of Jews who don’rt realize what we’re facing,” declared radio talk show host and long-time Jewish activist, Barry Farber, who was the featured speaker at the rally.

Also heaping accolades on Mr. Wiesenfeld for “speaking the truth in the face of hatred and death threats,” Mr. Farber said, “Hashem wants us to know who are enemies are.” He said that there are two kinds of Jews in the world; those who are “Jews of comfort” that lend their support for Israel and “Jews of combat” who espouse positions that are “anti-Judaism and anti-Zionist.”

Addressing the existential dangers that the burgeoning growth of radical Islam represents to humanity, Arish Sahani, founder of the Indian American Intellectuals Forum said, “if we don’t unite for Israel today; if we don’t join Israel in his fight for survival, we will lose the battle with radical Islam and all of us will pay the price.”

As a Hindu who was born in India, Mr. Sahani spoke his his personal encounters with radical Islam. “When my family was pushed out of my ancestors land of 1,000 plus years, now called Pakistan, do you know who came to kill my father? It was his own long time best friend who happened to be a Muslim.” Challenging Tony Kushner and those like him, Mr. Sahani intoned, “Who are supporting these radicals? The well educated, the famous and intelligent writers, performers and reporters. Don’t they know anything about Islamic history? They are paid to tell lies or they are afraid to tell the truth.”

Unable to be there in person, Dr. Phyllis Chesler, an Arutz Sheva op-ed contributor said, “Western intellectuals and progressives refuse to understand that Islam has a long and tragic history of colonialism, imperialism, racism, slavery, intolerance and no tradition of dissent without torture and death. Having a Hindu speaker there who understands; whose people have been persecuted by Muslims for 800 years should serve as a warning sign for all those like Tony Kushner.” 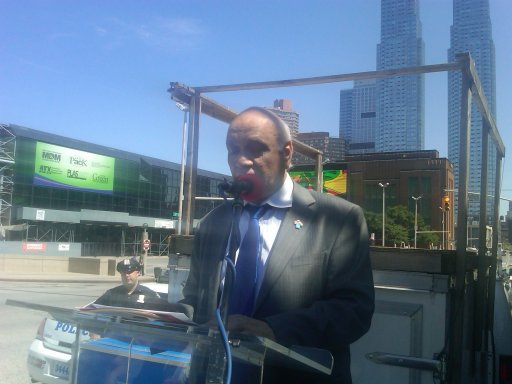 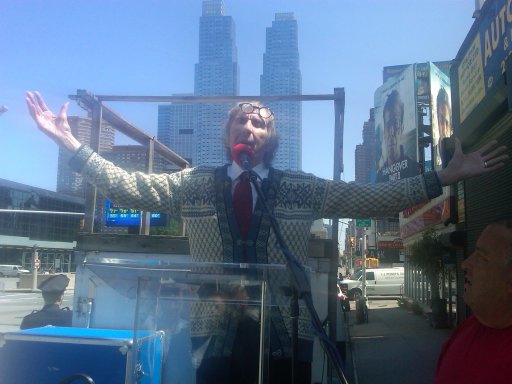 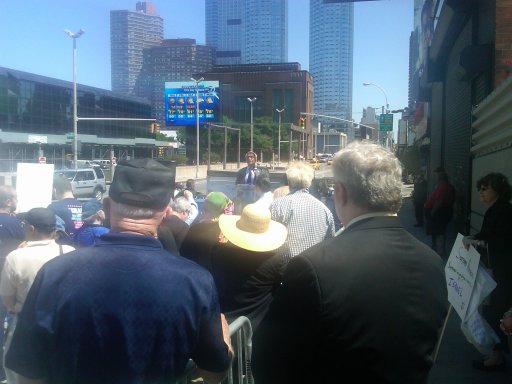