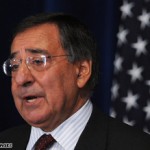 New research from writers and researchers Trevor Loudon and Cliff Kincaid shows that Leon Panetta, the CIA director being considered on Thursday for the position of Secretary of Defense, had a previously undisclosed personal and friendly relationship with Hugh DeLacy, a prominent member of the Communist Party USA. DeLacy visited such countries as China and Nicaragua and was himself a personal contact of identified Soviet spies Solomon Adler and Frank Coe and accused spy John Stewart Service. Panetta spoke at DeLacy’s memorial service, directed a series of letters to him personally as “Dear Hugh,” and placed a tribute to him in the Congressional Record.

Former Washington State Rep. DeLacy, named by Communist Party lawyer John Abt as a fellow member of the party, remained a communist operative until his death in 1986.

One “Dear Hugh” letter from then-Rep. Panetta to DeLacy offered a summary of a report on U.S. military operations that Panetta said was “unavailable for distribution.” Panetta concludes the March 24, 1977, letter, “If there is anything I can do for you in the future, Hugh, please feel free to call on me.”

The Panetta SecDef hearing is being held June 9 by the Senate Armed Services Committee at 9:30 a.m. in open session in Room SD-G50 of the Dirksen Senate Office Building, with a closed session later in the day in Room SVC-217, the Office of Senate Security in the Capitol Visitor Center.

Like DeLacy, Panetta shared a preference for communist regimes in Latin America, including the Sandinistas in Nicaragua. DeLacy had visited Nicaragua and had honored the Sandinistas, who were pawns of the Soviets and Cubans in Central America, while Panetta, as a member of Congress in 1983, strongly opposed President Reagan’s effort to undermine the Sandinista regime through CIA covert action. In addition, Panetta actively collaborated with the Institute for Policy Studies (IPS), a Washington, D.C. think tank that provided a cover for Chilean Marxist and Cuban agent Orlando Letelier to conduct communist political influence operations in the nation’s capital. Panetta, a member of Congress from 1977 to 1993, was a vocal opponent of Chile’s anti-communist government. In 1986, Panetta publicly endorsed protests against Reagan’s “illegal and extraordinarily vicious wars against the poor of Nicaragua, El Salvador, and Guatemala.”

“Panetta’s bias in favor of revolutionary Marxist movements in Latin America helps explain why the CIA has been spectacularly unsuccessful in stopping the advance of Hugo Chavez and his minions south of the U.S. border,” Trevor Loudon and Cliff Kincaid said in a joint statement. “His only apparent success as CIA director has been the killing of Osama bin Laden, an impressive operation that has nevertheless backfired in the sense of sending a nuclear-armed Pakistan into the arms of Communist China.”

“It is astounding that Panetta was confirmed as Obama’s CIA director without any of this being considered by the U.S. Senate,” Loudon and Kincaid went on. “But now that Panetta is set to move on to another critical national security post — Secretary of Defense — with new Senate hearings being held on Thursday, it is time to get all of this information out in the open. One of the most important matters that deserves scrutiny is Panetta’s apparent failure to be forthcoming about his personal relationship with DeLacy. It is time for the Senate to investigate this previously undisclosed relationship.”

Loudon and Kincaid, writers and researchers on national security issues, have assembled critical information about Panetta from important sources that have apparently been overlooked by Senate investigators and even FBI agents who investigated Panetta’s background. Among these sources, Loudon reviewed the Hugh DeLacy papers at the University of Washington, while Kincaid examined hearings conducted on “Communist Political Subversion” by the House Committee on UnAmerican Activities and “Un-American Activities in California” by the California Senate Fact-Finding Committee on Un-American Activities.

“When this information is examined in context,” Loudon and Kincaid stated, “it is clear that Panetta, whose nomination to be CIA director was considered mystifying even to those in the intelligence business, has been a key component of a network of left-wing activists and socialist organizations for over two decades. These individuals and groups include not only Hugh DeLacy and his communist associates but the communist-dominated Progressive Party, Democratic Socialists of America and the neo-Marxist New American Movement. Panetta, in short, was a player in the network that sponsored the political career of a young Barack Obama in Chicago. This helps explain why Panetta was picked, seemingly out of nowhere, for the CIA job.”

For further information contact Trevor Loudon on 202.506.8733 and/or [email protected]

For back up documentation go to www.usasurvival.org.

Mr. Breitbart said he’s been holding it back and did not want to make it public. Breitbart broke this scandalous story as you know and he told me that Opie Hughes from the Opie and Anthony radio program secretly snapped a picture of the completely explicit photo while Breitbart was on their show and then Opie posted it on the internet. Breitbart told me he never wanted the photo to be released. That it was released without his permission. He said quote, “I’m mortified. This is the first time that someone surreptitiously grabbed a photo of it. This is a complete breach of our arrangement that the photo would not be made public. It was a complete violation of trust.”