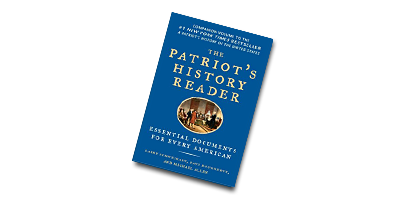 For those who love American history, you are in for a real treat with The Patriot’s History Reader. This is the book that follows A Patriot’s History of the United States. Both are books that every patriot should own, cherish and study. These books have an honored place in my private library – not an easy task.

Small wonder that Glenn Beck raves about these books. The Patriot’s History Reader brings together and artfully explains the most influential documents from American History. Once I picked up the book, I could not put it down. It caused me a few sleepless nights, but the payoff was amazing. Talk about a great way to learn history! What an incredible way to educate yourself on American history, while reading some of the most important documents to ever be written – both of Schweikart’s books are priceless in my estimation. You can’t firmly know where you are, if you don’t know what brought you here. These books show how America has evolved politically and historically.

I’m going to break a rule I adhere to – I never list a table of contents. But I am going to do so here. To fully appreciate the scope and depth of this book, you need to know what it contains.

Part I
The Formation of the Nation

When I was growing up, I thought of history as boring. I memorized just enough dates and facts to get an ‘A’ and moved on to computers and business. I find myself now in a position I never would have imagined – I simply love history. Especially American history. And the reason I fight against and research the Progressive movement, is because since I have started studying history, I see where all this leads. To understand your enemy, you have to study them. So now I look for the best in history books and this is right at the top of the list. Don’t tell me that the documents listed above hold no interest for you… Probably like me, you hunger to know what really happened. If so, please consider adding this book to your collection.

Not only do I recommend this to every patriot out there, this book, along with it’s predecessor A Patriot’s History of the United States, are the perfect gift for any student, child or young adult. It presents history in a way that is captivating while teaching facts and content. Heck, I’d give them to your children’s teachers. I’d also give it to members of your school board. Donate them to your library. Give them to your church. These are all ways you can help reeducate America and spread the word on her rich and wondrous history.

Get your copy today and an extra copy to give… The book’s release date is 06/28/2011. You can also find out more about these books here. I can’t recommend the book highly enough – it was a true pleasure to read.

Chris Muir hit a home run with this one. David Codrea at Examiner.com calls it.

Chris Muir, who produces the popular webcomic Day by Day, features a “Project Gunwalker” storyline in today’s strip—hands-down the most on-target and brilliant skewering I’ve seen to date, and I’ve seen some good ones.

Titled “Getting the Message,” the strip revolves around message options a telephone caller receives when trying to reach the White House about the ATF program that put guns in the hands of Mexican drug cartels. 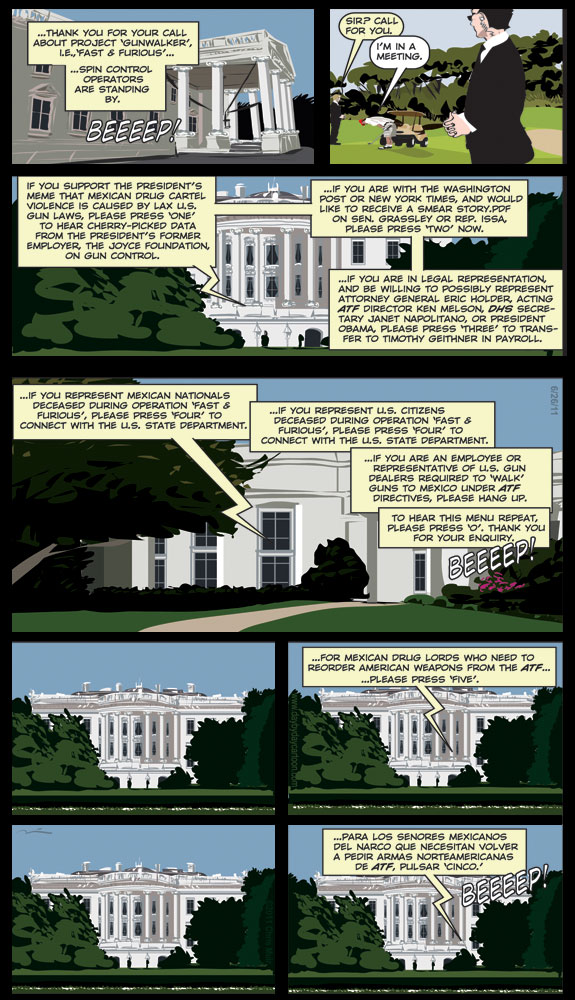 And if you liked that one, here’s one for all you Spaghetti Western lovers…

And this last one, for a triple play… 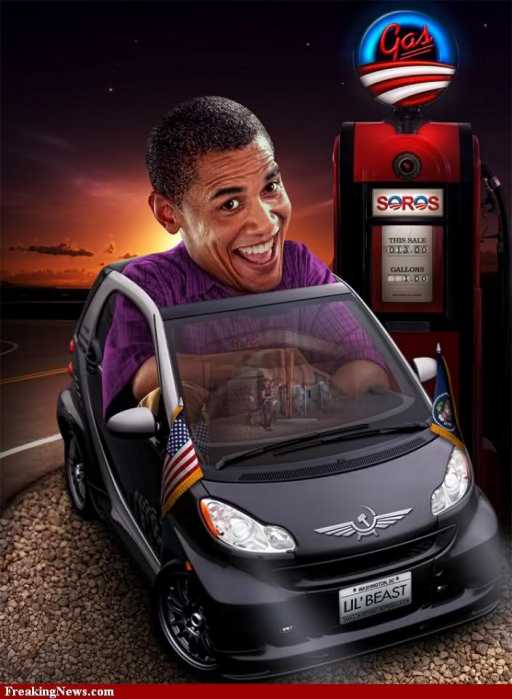 Claudia at I Own the World discovered this gem. I’ll excerpt it here, but you really must, MUST, go over and read the entire article. It is, as they say, a piece of work. A gem.

America has gotten a steady whiff of B.O. emanating from the White House and its environs for two and a half years now, and even those notoriously asnomic leftists closest to our foundering President are holding their noses.

Obama’s devoted followers, mainly the leftist simpletons in the press claque, continue to find imaginative new ways to structure polling questions designed to maintain the illusion that B.O. is not only still popular, but well-nigh unbeatable.

With all the talk about the weakness of the current crop of Republican presidential candidates, did you ever stop to think how the Flower of Affirmative Action got nominated in the first place? The Democrat slate was so weak in 2008 that über-sleazoid John Edwards was a serious contender and actually bamboozled 4.5 delegates to vote for him at the convention, despite the fact that he was battling with National Enquirer reporters in hotel bathrooms to keep his baby-mama under wraps.

Never mind that pre-Tea Party Republicans allowed the media and the cross-over primary voting processes in several states to choose Senator Doofus of Arizona as our candidate, a man who deservedly served as the caboose in his graduating class from the Naval Academy. McCain is such a pitiful excuse for a Republican that he makes the other RINOs look Reaganesque in comparison.

The B.O. Media has already found its 2012 version of McCain and is scavenging to gin up support for Jon Huntsman. He’s pals with B.O. and the Chinese and believes in global warming. I guess you could say that Romney and Huntsman are members of the Latter Day Republicans.

OK — head over and read the whole thing. And while you’re there, check out the rest of IOTW, if you aren’t already making it a regular stop. And if you aren’t, whattsa matta witchou?

Another patriot stands up!

This guy understands the issues and the consequences.

Would love to see this guy going to Washington with Marco Rubio and Allen West.