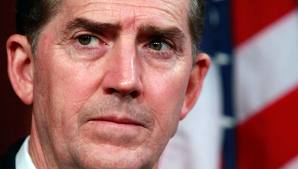 I have troubling news. I’m very careful about criticizing my party’s leaders, but what is happening in Washington right now cannot be ignored. House Speaker John Boehner (R-OH) has abandoned the Cut-Cap-Balance Act and is now pushing a new plan that is nearly identical to the one proposed by Senate Majority Leader Harry Reid (D-NV).

The Boehner-Reid plan gives the President an immediate increase in the debt limit and only promises to cut spending in the future. It violates all three principles of the Cut-Cap-Balance Pledge because it does not substantially cut current spending, it does not truly cap future spending, and it does not require the passage of a strong Balanced Budget Amendment before raising the debt limit.

In short, I oppose the Boehner-Reid plan because it won’t balance the budget and stop the debt that is destroying our country.

You will hear many claims about this plan over the next few days as it is pushed through the House and Senate. Some of these claims will be true, but many will be false. Here are the facts. The Boehner-Reid plan:

Why It Should Be Rejected

After reviewing the details of Boehner-Reid plan, I cannot support it. It won’t balance the budget and stop the debt. Even if the cuts called for in the plan were real, the debt will still increase by $7 trillion over the next ten years.

There are some in my party who think I should ignore the flaws of the Boehner-Reid plan, bite my tongue, and support my party’s leaders. If I thought this were a political game, that might make sense. But the future of our country is at stake, I don’t believe this plan will save it, and I have a moral obligation to say so.

Fortunately, there is a much better solution.

The Cut-Cap-Balance Act would balance the budget, stop the debt, and protect our AAA bond rating. This legislation passed the House with bipartisan support but was blocked by Democrats in the Senate.

The votes in the Senate for Cut-Cap-Balance are there if Republicans stand firm. 23 Democrats in the Senate have expressed support for the Balanced Budget Amendment at some point in their careers. They’re blocking it now because they believe Republicans will blink and agree to something much less.

And that’s exactly what will happen if the Boehner-Reid plan is passed. It gives the big spenders in Washington everything they wanted — an increase in the debt limit, phony spending cuts, and a mechanism to pass tax increases.

Please call your senators today and urge them to oppose the Boehner-Reid plan and to demand passage of the Cut, Cap, Balance Act.

NoisyRoom Note: I would just like to ask if Jim DeMint is the only politician left with a spine and common sense? I totally agree with him. For the life of me, I cannot understand why Tea Party members of the House are falling in line behind Boehner. What happened to you? Suck it up! This crap of doing what is best for the collective and compromising is certain death for America. Have you lost your minds AND your spines? Or were you made an offer you can’t refuse?