“Well the president’s speech in Arizona as he asked folks to start ratcheting down the rhetoric was all talk. He wasn’t sincere in that. And, that’s typical Barack Obama. Unfortunately that’s typical of our president where its Blah-Blah-Blah. It’s all talk and no real action. In other words otherwise he’d be on Biden and tell Biden to tone it down a little bit… Heck Sean, if we were real domestic terrorists, shoot, President Obama would be wanting to pal around with us. Wouldn’t he? He didn’t have a problem palling around with Bill Ayers back in the days when he kicked off his political career… No if we were real terrorists President Obama wouldn’t have a problem with us.”

Power Line: THE WINNER OF THE POWER LINE PRIZE IS…

Savage: America has been ‘hoodwinked’

LIMBAUGH: A Total Waste of Time and Effort 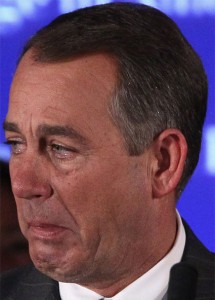 Boehner and McCain vied for “Pansy of the Week,” and Boehner won. Despite the polls that revealed overwhelmingly that America wanted no increase in the debt ceiling, Boehner caved like a Hollywood stage chair. As the saying goes, “His ass is grass.”

America deserves a budget that is tighter than a camel’s butt in a sandstorm; however Boehner’s bill essentially doubles the national debt in a decade, thus the Democrats lust for spending is not hampered in the least. The payout to the lien holders, the American taxpayers, is over ten years, a deal I dare you to try to cut with the IRS if you owe back taxes. Unlock cell door #13.

Any ten year plan for spending by government is a fool’s folly, because America’s back will be broken from the weight of debt long before then. We are clicking off $5B a day in debt service alone and not even addressing the principal. Why didn’t Boehner just approve America for a reverse mortgage, because that’s what old people do when they don’t plan on leaving the kids and grandkids the house in the will.

Boehner’s deal does not shrink government at all. He had a chance to finally force government to rein in spending and he dropped the ball. He negotiated with Obama, a guy who is too lazy to scratch his own butt, a guy who hasn’t presented a budget in over eight months. Obama relies on white people to do his work for him, because Obama is incompetent and indolent.

Uh, does anybody here, uh, know how to write a budget?

If there was ever a president who needed the credit card cut, as Sheila Jackson implied, “It’s this [black] president.” Obama runs America finances like a hood rat; spending all the money before he even gets his check. Hood rats spend like there’s no tomorrow, because they don’t think about tomorrow.

It’s a crisis, they always say. It certainly is. The crisis is Obama’s spending!

Obama orchestrated the second crisis, so he could continue the first crisis. And the Republicans yet again responded like…Republicans. Wimps. “Guilters.”

Their excuse for not truly offering a solution about the debt by cutting the debt dramatically was to say that things would be worse if they didn’t allow for the ceiling to go up and that our credit rating would suffer. What a farce.

Things are tough and they will get tougher. Get over it. And our credit is already shot, whether Moody’s or the S&P does anything or not. These are all reasons to cut spending now! Instead however, Boehner’s negotiation tactic was to state publicly that he would “not allow America to default on its debt.” That sounds so altruistic, so fatherly, so Custeresque.

Boehner wears neither boxers nor briefs, and if you’re thinking ‘commando,’ stop. Think thong. How can you possibly give the Fed more money, when you consider what the Fed spends money on?

In this report on what the Republicans proposed to cut from the budget, there are things like $1B in unpaid taxes by federal workers, $1.2B of taxpayer-funded union activities, and the list of ridiculous spending is a mile long and a mile deep. The only question we should be asking ourselves on these programs is, “How the heck did most of these expenditures get added to the budget in the first place?!”

The Left calls us radicals and terrorists, when all we essentially ask is that the government be good stewards of our money. Our detractors are the real radical terrorists, economic terrorists. The Republicans will never call them such, exposing the Left for what most of them are, lazy thieves. Doing so would require courage, something that most Republicans just don’t seem to possess.

Michele Bachmann does. She held firm, not falling for some worthless symbolic cut that’s not worth a week’s interest on the debt. And there were a few others. God bless this small group of patriots.

Boehner however has tested the mettle of the Tea Party and this is our chance to send a message loud and clear from the people. Just because you have an ‘R’ after your name, doesn’t give you a pass. We hold Conservatives to a higher standard and Boehner will learn that the grass roots knows whose ass to mow.