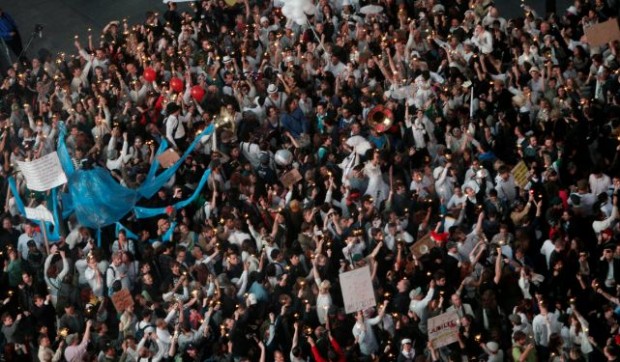 The Blaze: Occupy Wall Street protesters fill Times Square for a rally Saturday, Oct. 15, 2011 mixing with gawkers, Broadway showgoers, tourists and police to create a chaotic scene in the midst of Manhattan. The Occupy Wall Street demonstrators had marched north through Manhattan from Washington Square Park earlier in the afternoon. Once in Times Square, they held a rally for several hours before dispersing. Over the course of the day, more than 70 people were arrested. (AP Photo/David Karp)

Occupy Wall Street has gone global. Marxists, Communists, Progressives, the disaffected, hippies, young idealists, the misinformed and the useful idiots have combined to spread a message of social justice and Marxism to all whether they want it or not. They are also spreading filth, violence, chaos, racism and class warfare… A very useful tool for the Obama administration. The perfect emergency that will certainly not go to waste.

It’s the ‘I deserve it!‘ culture run amok. Backed by the likes of Soros and Democratic elites. And it is all going according to the well laid plans of the Marxists who are ‘fundamentally’ changing America and not for the better. Their plan involves discrediting the Tea Party and/or co-opting as many of them into the OWS movement as possible. They will use students and union workers until they have served their purpose and then discard them or worse. Americans seem to be falling for vague platitudes and false flag protests out of fear and anger. This is a fatal error in judgment for survival purposes. The bill for ‘something for nothing’ is coming due and when it cannot be paid, the top will slam down forcefully on Americans with the gleeful assistance of our self-crowned dictator.

People are showing up by the thousands to demand that the rich pay their fair share and the banks be reformed. I agree that the Fed needs to go. So should the IRS. But the anger and outrage should be focused on the politicians who are behind this whole God-forsaken mess. There are a number of these elites that need to go to jail for a very long time for their part in the mortgage debacle and the financial meltdown in the US. But that isn’t what will occur here. Nope, the Marxists and unions will pay and bus in as many supporters as they can to make numbers appear larger, but make no mistake, there are going to be many, many people involved in this on their own worldwide and the violence will escalate rapidly when it starts. The movement may be slowed by winter’s frosty bite, but the movement will resurface and surge in the spring and summer of next year here in America.

These protesters don’t seem to realize the very things they are protesting are what gave them a high living standard in the first place. What has destroyed the system is having easy money available with no real responsibility on how to spend or repay it. We have let crooks run our country with a get out of jail free card that can be used virtually any time. If we had stayed on the gold standard, worked to earn our money, shunned credit and demanded ethics and accountability from our leaders, we would not be in this mess today. Whatever money you personally put into the system should be yours – but lifetime bennies and trillion dollar ponzi schemes? That’s insanity. Then putting thieves in charge of the till? Further insanity. But the biggest joke of all is pretending there is no problem while we gleefully wade into an ocean of unpayable debts and drown the America we all know and love. It’s suicide by indulgence.

“The liberation of the oppressed class is impossible, not only without violent revolution, but also without the destruction of the apparatus of state power.” Wiker wrote that Lenin demanded, “The bourgeoisie, the oppressive capitalist class, must be ferociously annihilated by the workers they oppressed, and a new revolutionary government built on the corpses.”

That, ladies and gentlemen, is blood in the streets, slaughter and mayhem. It is exactly what Obama wants. In a Godless society such as our universities who promise a utopia, the only missing ingredient is Marxism. That has now been baked into the cake and the icing is revolution.

Lenin’s view of what Trotsky termed the ‘Perpetual Revolution:’

The proletariat [= mobs, unionists, workers, useful idiots] needs state power, the centralized organization of force, the organization of violence, for the purpose of crushing the resistance of the exploiters [= capitalists] and for the purpose of leading the great mass of the population – the peasantry, the petty bourgeoisie, the semi-proletarians – in the work of organizing socialist economy.

And as the pampered masses demand more and more, they play right into the Marxist plan of bottom up, top down, inside out. Lenin’s prophecy come to pass: “The capitalists would sell us [communists] the noose to hang them with.” A new world government threatens to be built on the dead bodies of the masses worldwide with a handful of elites at the helm. A Marxist utopia with an iron fist and equal debasement for all (except for the leaders of course). Lenin’s 99 percenters will find that social justice in the end, applies only to those in power. The useful idiots along with patriots will become slaves and peasants if a New World Order is indeed brought to pass.

They are truly the 99 percent of useful idiots.