Worst storm in 40 years – epic. And I live in the path of some of this weather. Goodie… 🙁

On 5 November an earthquake measuring 5.6 rattled Oklahoma and was felt as far away as Illinois.

Until two years ago Oklahoma typically had about 50 earthquakes a year, but in 2010, 1,047 quakes shook the state.

In Lincoln County, where most of this past weekend’s seismic incidents were centered, there are 181 injection wells, according to Matt Skinner, an official from the Oklahoma Corporation Commission, the agency which oversees oil and gas production in the state.

The practice of injecting water into deep rock formations causes earthquakes, both the U.S. Army and the U.S. Geological Survey have concluded.

As the U.S. natural gas industry mounts an unprecedented and expensive advertising campaign to convince the public that such practices are environmentally benign, U.S. government agencies have determined otherwise.

According to the U.S. Army’s Rocky Mountain Arsenal website, the RMA drilled a deep well for disposing of the site’s liquid waste after the U.S. Environmental Protection Agency “concluded that this procedure is effective and protective of the environment.” According to the RMA, “The Rocky Mountain Arsenal deep injection well was constructed in 1961, and was drilled to a depth of 12,045 feet” and 165 million gallons of Basin F liquid waste, consisting of “very salty water that includes some metals, chlorides, wastewater and toxic organics” was injected into the well during 1962-1966.

Why was the process halted? “The Army discontinued use of the well in February 1966 because of the possibility that the fluid injection was “triggering earthquakes in the area,” according to the RMA. In 1990, the “Earthquake Hazard Associated with Deep Well Injection–A Report to the U.S. Environmental Protection Agency” study of RMA events by Craig Nicholson, and R.I. Wesson stated simply, “Injection had been discontinued at the site in the previous year once the link between the fluid injection and the earlier series of earthquakes was established.”

There is a significant divergence between “possibility,” “established” and “was causing,” and the most recent report was a decade ago. Much hydraulic fracturing to liberate shale oil gas in the Marcellus shale has occurred since.

According to the USGS website, under the undated heading, “Can we cause earthquakes? Is there any way to prevent earthquakes?” the agency notes, “Earthquakes induced by human activity have been documented in a few locations in the United States, Japan, and Canada.

The cause was injection of fluids into deep wells for waste disposal and secondary recovery of oil, and the use of reservoirs for water supplies. Most of these earthquakes were minor. The largest and most widely known resulted from fluid injection at the Rocky Mountain Arsenal near Denver, Colorado. In 1967, an earthquake of magnitude 5.5 followed a series of smaller earthquakes. Injection had been discontinued at the site in the previous year once the link between the fluid injection and the earlier series of earthquakes was established.”

Note the phrase, “Once the link between the fluid injection and the earlier series of earthquakes was established.”

So both the U.S Army and the U.S. Geological Survey over fifty years of research confirm on a federal level that that “fluid injection” introduces subterranean instability and is a contributory factor in inducing increased seismic activity.” How about “causing significant seismic events?”

Fast forward to the present.

Overseas, last month Britain’s Cuadrilla Resources announced that it has discovered huge underground deposits of natural gas in Lancashire, up to 200 trillion cubic feet of gas in all.

On 2 November a report commissioned by Cuadrilla Resources acknowledged that hydraulic fracturing was responsible for two tremors which hit Lancashire and possibly as many as fifty separate earth tremors overall. The British Geological Survey also linked smaller quakes in the Blackpool area to fracking. BGS Dr. Brian Baptie said, “It seems quite likely that they are related,” noting, “We had a couple of instruments close to the site and they show that both events occurred near the site and at a shallow depth.”

But, back to Oklahoma. Austin Holland’s August 2011 report, “Examination of Possibly Induced Seismicity from Hydraulic Fracturing in the Eola Field, Garvin County, Oklahoma” Oklahoma Geological Survey OF1-2011, studied 43 earthquakes that occurred on 18 January, ranging in intensity from 1.0 to 2.8 Md (milliDarcies.) While the report’s conclusions are understandably cautious, it does state, “Our analysis showed that shortly after hydraulic fracturing began small earthquakes started occurring, and more than 50 were identified, of which 43 were large enough to be located.”

Sensitized to the issue, the oil and natural gas industry has been quick to dismiss the charges and deluge the public with a plethora of televisions advertisements about how natural gas from shale deposits is not only America’s future, but provides jobs and energy companies are responsible custodians of the environment.

It seems likely that Washington will eventually be forced to address the issue, as the U.S. Army and the USGS have noted a causal link between the forced injection of liquids underground and increased seismic activity. While the Oklahoma quake caused a deal of property damage, had lives been lost, the policy would most certainly have come under increased scrutiny from the legal community.

While polluting a local community’s water supply is a local tragedy barely heard inside the Beltway, an earthquake ranging from Oklahoma to Illinois, Kansas, Arkansas, Tennessee and Texas is an issue that might yet shake voters out of their torpor, and national elections are slightly less than a year away.

While filming an altercation between two protesters from afar, a citizen journalist is warned to be careful with what he does with the footage. He was told off camera that, “Snitches don’t get stitches, they wind up in ditches.”

Yelling the words “slave” and “sellout,” the Occupy DC protesters hurl insults at the security guard protecting a building.

“In this scene from “Islamophobia,” Tommy Robinson of the English Defence
League takes “Vanguard” correspondent on a tour of the neighborhood
where he grew up, which he says has been taken over by radical
Islamists. The drive quickly turns into a heated argument with a Muslim
man passing by who recognizes Tommy.” 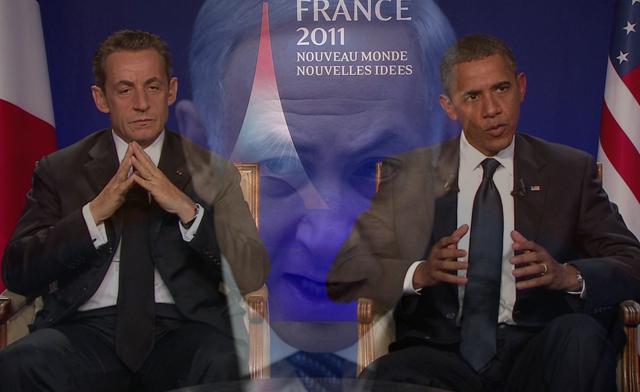 This week’s contest is dedicated to Joe Frazier… so long Champ and thanks.

This week, The Grouch, Monkey In The Middle and Capitalist Preservation took advantage of my generous offer of link whorage and earned honorable mention status.

You can too! Want to see your work appear on the Watcher’s Council homepage in our weekly contest listing? Didn’t get nominated by a Council member? No worries.

Simply head over to Joshuapundit and post a link to the piece you want considered along with an e-mail address (which won’t be published) in the comments section no later than Monday 6 PM PST to be considered for our honorable mention category, and return the favor by creating a post on your site linking to the Watcher’s Council contest for the week.