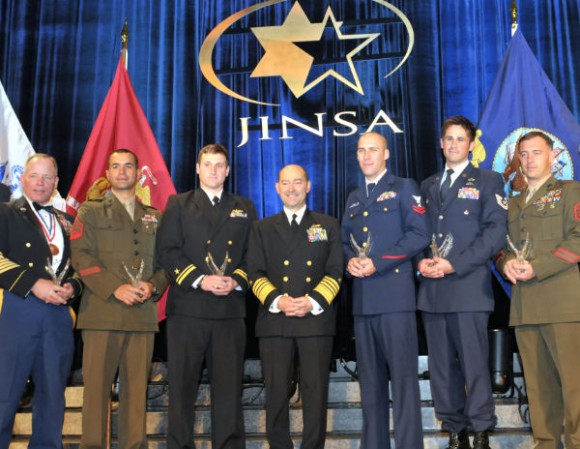 On this Veterans Day, I want to note an annual event I attended this week, on November 7, put on by the Jewish Institute for National Security Affairs (JINSA), which honored six young military heroes. The six represented each of the five branches of the U.S. military and the U.S. Special Operations Command. They were honored “for having distinguished themselves through superior conduct in the War on Terrorism,” and each received a Grateful Nation award from JINSA. JINSA is a Washington-based think tank that focuses on issues of the U.S. and Israel in national security.

The honoree of the evening was ADM James Stavridis, who was awarded the 29th Annual Henry M. Jackson Distinguished Service Award. Admiral Stavridis commanded Enterprise Carrier Strike Group, carrying out combat operations in the Arabian Gulf as part of Operation Iraqi Freedom and Operation Enduring Freedom. In 2009, he became commander of European Command and the Supreme Allied Commander, Europe.

Adding to the poignancy of the evening was the fact, cited by the master of ceremonies of the evening, FOX News’ Catherine Herridge, that among the guests in the audience last year at the Grateful Nations event were seven Navy SEALs who were among the 22 SEALs who were killed when their helicopter was shot down by Taliban forces in August of this year. Altogether, 30 Americans were killed in that incident. Most of the SEALs killed were part of SEAL Team 6, which killed Osama bin Laden in May inside Pakistan. However, none of those killed were part of the unit that actually raided the bin Laden compound, according to news reports.

I have attended this event for almost all of the last 14 years. It is one of the most moving events I ever attend, as the six heroes are introduced and their stories are told. They are chosen by their respective branches of the military, and are meant to represent the heroism exhibited on a daily basis by all of the men and women who occupy our nation’s military. A Google search indicates that there has been no media coverage of this year’s event.

Below are the stories of the six military heroes as written in the program for that evening’s event:

For extraordinary heroism in combat as the senior Medical Sergeant for Special Forces Operational Detachment Alpha-765 in support of Operation Enduring Freedom in Panjwai District, Kandahar Province, Afghanistan. On 24 June 2006, during Operation Kaika, then-Sergeant First Class Brendan O’Connor led a quick reaction force through Taliban positions to reinforce a surrounded patrol. Sergeant O’Connor led the consolidation of three friendly elements, each surrounded, isolated, and receiving fire from all directions. He was instrumental in keeping his team alive during more than 17-hours of sustained combat much of it so close that he and the other defenders could hear Taliban fighters swarming their perimeter. Alerted that two soldiers were wounded at another position, Sergeant O’Connor, crawled alone, under intense enemy machinegun fire to reach the soldiers where he provided medical care while exposed to heavy volumes of unrelenting Taliban fire. He then carried one of the wounded 150 meters across open ground to an area of temporary cover. In bringing the wounded back to the position, he carried them over a wall three times, in plain sight of the enemy, while bullets pounded the structure around him. Sergeant O’Connor’s remarkable actions are in keeping with the highest traditions of military heroism and reflect credit upon himself, the Combined Special Operations Task Force-Afghanistan, Special Operations Command-Central, and the United States Army. For this action, he was awarded the Distinguished Service Cross.

Sergeant Joseph M. Perez is commended for personal achievement while serving as Squad Leader, 1st Squad, 3d Platoon, Company F, 2d Battalion, 2d Marine Regiment, Regimental Combat Team-7, Marine Expeditionary Brigade-Afghanistan, on 27 December 2009 in support of Operation Enduring Freedom. During this day, while on patrol in the vicinity of Luguryan Village, Helmand Province, Sergeant Perez received reporting that Taliban fighters had his squad surrounded and were ready to ambush his unit from five mutually-supported machinegun positions. Anticipating enemy fire, Sergeant Perez split his squad into three elements. Seconds later, machinegun fire pinned his base unit down, isolating them from the rest of his squad and injuring his patrolman. Knowing the enemy’s intention to capture the isolated Marine, Sergeant Perez attempted multiple times to reach him, but was denied by heavy enemy fire. He then ordered his 2d Fire Team to attack from the north, a move that effectively reduced the enemy’s fires. Still under heavy enemy fire, Sergeant Perez exposed himself to the enemy, sprinted 50 meters to render aid to his injured Marine. Continuing to expose himself to enemy fire, Sergeant Perez directed the internal fire support of his squad and led his base unit toward the enemy positions. After closing on the enemy positions, Sergeant Perez found two enemy fighters that had been killed and captured one that was wounded along with his machineguns and ammunition. Sergeant Perez’s initiative, perseverance and total dedication to duty reflected great credit upon him and were in keeping with the highest traditions of the Marine Corps and the United States Naval Service. For this action, he was awarded the Silver Star.

For meritorious achievement while serving as small boat casualty evacuation officer aboard the destroyer USS Sterett from the 19 February 2011 to 27 February 2011, Lieutenant Junior Grade Haught performed his demanding duties in an exemplary and highly professional manner, directly contributing to Sterett’s dauntless response in the rescue attempt of the sailing yacht Quest, an American flagged vessel which was pirated by Somalis in the northern Arabian Sea. Displaying steadfast determination, and unfailing courage, he directed his small boat to deliver combat medic rescue forces to the Quest after suspect pirates fired upon Sterett with assault rifles and a rocket propelled grenade launcher. After the Quest was secured, it was necessary to bring it to port for criminal analysis. With unwavering dedication to the mission, he personally sailed the Quest 550 miles to Djibouti a journey that took three days and nights amidst adverse sea conditions while maintaining the fully intact crime scene preserving evidentiary integrity for the Federal Bureau of Investigation. Lieutenant Haught’s distinctive accomplishments, unrelenting perseverance and steadfast devotion of duty reflected credit upon himself and were in keeping with the highest traditions of the United States Naval Service.

Staff Sergeant Graham H. Jacobs is commended for meritorious service as the Element Leader, Team 8113, Marine Special Operations Company Alpha, 1st Marine Special Operations Battalion, U.S. Marine Corps Forces, Special Operations Command in support of Operation Enduring Freedom. During this deployment, he consistently led his element and partner nation force with extraordinary precision. His leadership was the hallmark of his unit’s success while providing superb training for the partnered force. Staff Sergeant Jacobs exhibited superb leadership, outstanding professional competence and strategic vision while ardently mentoring more than one hundred Afghan soldiers, peers and subordinates. He conducted over seventy-five ground convoy movements and led Afghan Special Forces on fifteen combat operations that involved direct contact with the enemy forces in Helmand Province. Staff Sergeant Jacobs repeatedly exposed himself to direct and indirect fire in the execution of his duties while combat advising Afghan forces in a very kinetic environment. His ability to calmly assess a tactical situation and inspire Afghan leaders to excel in the face of adversity is exceptionally noteworthy. Staff Sergeant Jacobs’ leadership, initiative and selfless devotion to duty reflect great credit upon himself and were in keeping with the highest traditions of the Marine Corps and the United States Naval Service. For his actions, he was awarded the Silver Star.

On the 94th anniversary of the Russian Revolution (November 7) an ex-Soviet visits Occupy LA to videotape & report to his Russian friends if Americans started their own Socialist Revolution.

Mr. Weinstein is the author of “Capitalism 101” which can be found at: http://capitalism101.net

Rep. Darrell Issa (R-CA) is demanding an investigating into a New York community group because he is alleging improper ties to Occupy Wall Street. The group, New York Communities for Change, has been described as a reconstituted version of the now-defunct community group ACORN.

By: John Oram of BSN 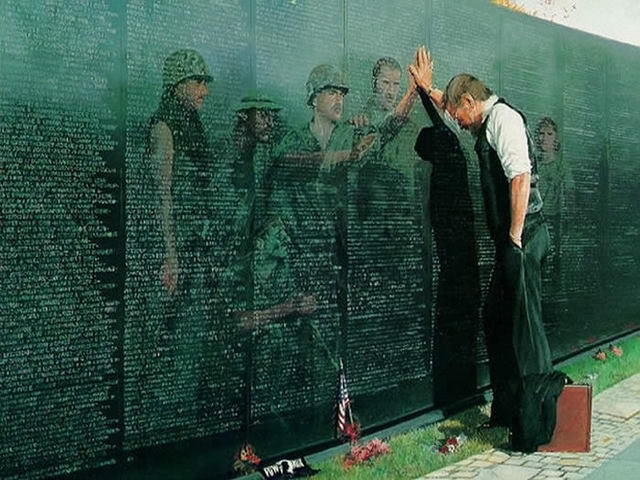 Veterans Day reminds me of the two times I have been to the Vietnam Veterans Memorial Wall in Washington DC.

Each time I found the seven names of lost comrades I had served with in various units. The name that gave me the most pause was Larry Britten. Larry was my Eagle Scout leader when I was in Boy Scouts. Larry’s younger sister was one of my few friends during high school. Larry was at West Point Military Academy when I was an enlisted man at West Point. Larry was the one who persuaded me that a career in the military would not make me a happy camper.

Veterans Day reminds me of the many trips to the north-east corner of the State Capitol grounds, beside the State Capitol in Sacramento, and the memorial to California Vietnam Veterans Memorial. Each city, town and village in California has the names of those that gave their lives during the Vietnam Era fighting. The driving “force” to get the memorial built was B.T. Collins, a well-known figure in California government (and a former Special Forces Captain, who lost a leg and an arm in Vietnam). B.T. was also the driving force for the B.T. Collins “Captain Hook” Scholarship at Santa Clara University.

Being a Veteran means you have pledged to:

“I do solemnly swear (or affirm) that I will support and defend the Constitution of the United States against all enemies, foreign and domestic; that I will bear true faith and allegiance to the same; and that I will obey the orders of the President of the United States and the orders of the officers appointed over me, according to regulations and the Uniform Code of Military Justice. So help me God.” (Title 10, US Code; Act of 5 May 1960 replacing the wording first adopted in 1789, with amendment effective 5 October 1962).”

Being a Veteran means you sacrificed your time, energy and were willing to sacrifice your life so fellow citizens can remain free of those burdens. Today’s military is made up of 100% volunteers, they are the less than one percent who are following the orders of our civilian government to do their duty as ordered.

It is up to those of us who are no longer or have not been in the military to directly voice our views to the civilian government officials as to how our military volunteers should be used to defend our nation.

We should all take one minute to silently remember all those that are in the military and especially those who are in a combat zone. Take a moment to reflect on the wounded military veterans who will live the rest of their lives with the physical and emotional scars from their service for us. And another one minute to remember those that have given the ultimate sacrifice of their lives to protect the nation we are citizens of.

NBC2 Investigates: Organic or Not?

Mischa Popoff
Author of Is it Organic? The inside story of the organic industry
www.isitorganic.ca