I lived near there for some time and I have relatives near there. My condolences to the families of those on board – how very sad. 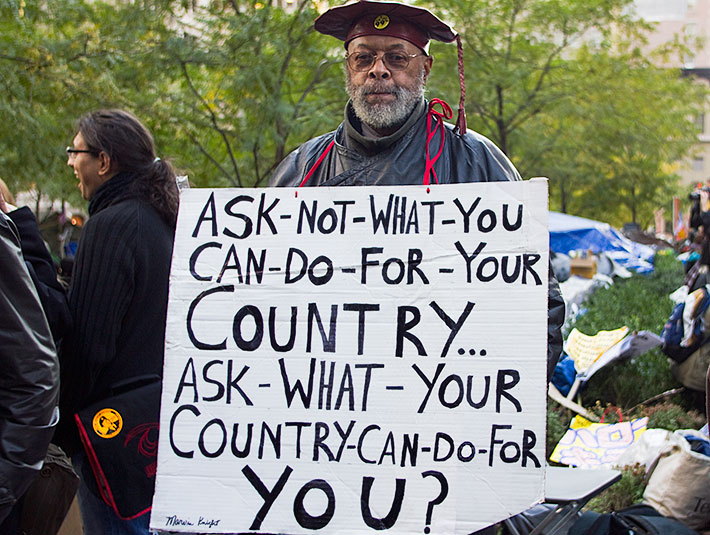 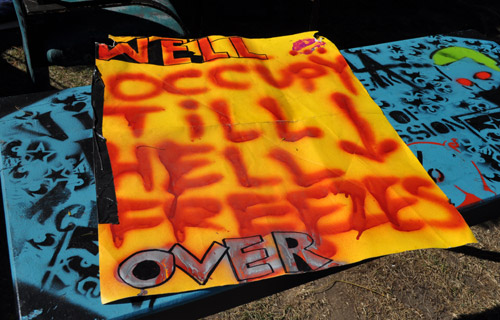 Occupy protesters these days are fond of chanting “This is what democracy looks like!” — a slogan they borrowed from other far-left protests in recent decades.

But at Occupy Los Angeles, fellow photojournalist Ringo captured what democracy really looks like in the OWS milieu. Yeah, Occupations have their “General Assemblies” and their up-twinkles and so forth, but that only works when everyone is already in essential agreement after the real dissenters have already been expelled, leaving the “democratic assembly” to at most bicker over minor details.

But what happens when there is deep fundamental disagreement on some point — in this case the key point of who is allowed permission to speak in the first place? Do the Occupiers have their own version of the First Amendment, or perhaps something even better?

The deeply disturbing underbelly of Occupy groupthink was captured by Ringo a couple weeks ago at the Occupy LA encampment when two disgruntled protesters wanted to have their say on the camp’s “open mike” stage which is supposedly free for anyone to use. According to the Occupy philosophy, this system is even better than the First Amendment, because with an open mike, every single person has an equal voice (not just those who control the broadcast media).

Except what happens when one of your own starts saying things that the other Occupiers don’t want to hear?

All of us at NoisyRoom wish each and every one of you a happy and blessed turkey day! 8) We have much to be grateful for and we count our blessings every day.

I can’t think of a better Thanksgiving greeting than the letter that Chuck Muth put out today. Chuck is a long-time friend and someone I admire a great deal. We miss you and the family Chuck! Without further ado… 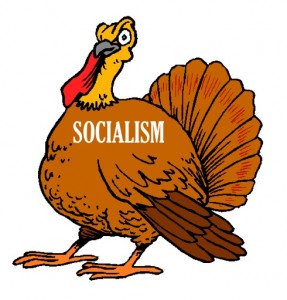 Thanksgiving: America’s Lesson on Why Socialism Doesn’t Work
By Matthew A. Givens

Thanksgiving is approaching once again, and with it come visions of children’s plays with Indians and Pilgrims, complete with little Pilgrim hats made of construction paper. The story told in these plays and learned by public school students at every grade level is a simple one.

The Pilgrims arrived at Plymouth Rock late in 1620. The first winter was harsh, but the colonists worked hard and applied themselves industriously to their own survival. They had help from the local Indian tribes, who helped them learn how to survive. The result was a plentiful harvest in fall 1621, not to mention the first celebration of Thanksgiving.

It’s a wonderful story. There’s only one problem with it: It isn’t true.

It contains elements of truth. For example, the first winter was harsh, and the local Indian tribes did help the colonists learn how to survive, what to plant and how to prepare the food. But the 1621 harvest was not bountiful. In fact, famine haunted the fledgling colony.

When the colonists first landed, they signed something called the Mayflower Compact. Most of us have heard this document praised as an early social contract helping different people to live together. What most of us never learned was that it was also an experiment in socialism.

William Bradford, governor of the colony at the time, wrote History of Plymouth Plantation. In it, he wrote that “young men that are most able and fit for labor and service” complained about being forced to “spend their time and strength to work for other men’s wives and children.” Since “the strong, or man of parts, had no more division of victuals and clothes than he that was weak,” the strong men simply refused to work, and the amount of food produced was never adequate.

In fact, the colony went hungry for years as strong men refused to work hard, and theft of crops still in the ground ran rampant. Bradford wrote that the colony was riddled with “corruption and discontent.” The crops were small because “much was stolen both by night and day, before it became scarce eatable.”

The harvests of 1621 and 1622 were adequate enough so that “all had their hungry bellies filled,” but that did not last. Deaths from malnutrition continued into the next year.

But in 1623, something changed. Bradford reported, “Instead of famine now God gave them plenty, and the face of things was changed to the rejoicing of the hearts of many, for which they blessed God.” By 1624, the colony was producing so much food that it began exporting corn.

What caused this change?

After the poor harvest of 1622, the colony brainstormed for a way to raise more corn and obtain a better crop. The solution, like the Thanksgiving story told today, was simple. In 1623, Bradford “gave each household a parcel of land and told them they could keep what they produced, or trade it away as they saw fit.”

The socialistic experiment that had failed them was abandoned and replaced with capitalism. That turned the colonists away from failure and forward into success and growth. And this move away from socialism, along with the resulting prosperity, is what we truly celebrate today. It is easy to see why I call Thanksgiving the first Libertarian holiday.

Thanksgiving, far from being the simple and uninspiring story of a group of people learning how to farm, is actually a celebration of what has made America itself great. It is the story of people working together by working for themselves first, and in so doing, improving the standard of living for everyone. These are the American ideas we hold dear.

As you sit down to your table laden with turkey, dressing and pumpkin pie, remember the true story of Thanksgiving, and what it means to all.

(Mr. Givens is a resident of Montgomery and former vice chairman of the Libertarian Party of Alabama)

Brain Surgeon Briefed: Obamacare Death Panels to Refuse Surgeries to Save Patients over 70