MSNBC’s Chris Matthews, guest hosting on Andrea Mitchell Reports, revealed that he has access to briefings by the highest level of the Obama Administration where he learned they are afraid the Republicans will intentionally block legislation to damage an economic recovery.

President Obama has been delivering his primary campaign narrative … ‘a fair shot for everyone, with everyone doing their fair share,” while the mainstream media provides virtually no challenge or reporting on the plethora of contradicting facts readily available.

Fortunately, should they so desire, Stephen Moore’s article titled “A Fairness Quiz for the President,” published in the Wall Street Journal yesterday, can provide a quick set of facts that anyone can grasp.

Here are some of the highlights: … “Is it fair that”…

…the richest 1% of Americans pay nearly 40% of all federal income taxes, while the richest 10% pay two-thirds of the tax? This is a greater burden than every other industrialized nation–including socialist Sweden.

…nearly 4 out of every 10 American households pay no federal income tax at all—a number that has risen every year under Obama?

…American corporations pay the highest statutory corporate tax rate of all other industrialized nations but Japan–which is cutting its rate on April 1?

…Americans who build a family business, hire workers, reinvest and save their money—paying a lifetime of federal, state and local taxes often climbing into the millions of dollars—must then pay an additional estate tax of 35% (and as much as 55% when the law changes next year) when they die, rather than passing that money onto their loved ones?

…after suffering through three years of “Obamanomics”, the poor are poorer, the poverty rate is rising, the middle class is losing income, and some 5.5 million fewer Americans have jobs today than in 2007?

…those who work full-time jobs (and sometimes more) to make ends meet, have to pay taxes to support up to 99 weeks of unemployment benefits for those who don’t work?

…those who took out home mortgages and make their payments each month, see their tax dollars used to subsidize people who acted recklessly, greedily and sometimes deceitfully–taking out mortgages they now can’t afford to repay?

…some of Obama’s largest, [millionaire and billionaire] campaign contributors received federal loan guarantees for their investments in renewable energy projects that went bust?

…federal employees receive benefits that, according to the Congressional Budget Office, are nearly 50% higher than those of private-sector workers–whose taxes go to pay for it all?

…soon, almost half the federal budget will take income from young working people, then redistribute it to old non-working people–even though people over 65 are already among the wealthiest Americans?

…in 27 states workers can be compelled to join a union in order to keep their jobs?

…Boeing, a private company, was threatened by a federal agency when it sought to add jobs in a right-to-work state rather than in a forced-union state?

…our kids and grandkids and great-grandkids—who never voted for Obama—will have to pay off the $7 trillion in additional national debt he accumulated over the past four years?

As to Obama’s “fair shot” argument, the most damningly important factor against it is the K-12 spending per student among all the major industrialized nations, where at $91,700 the United States ranks second only to Switzerland.

Compared to the most advanced countries having the largest economies in the world, such as Japan at $69,000, the United Kingdom at $65,000 and Germany, the strongest and largest economy in Europe, at $55,000, and our education spending largesse is more than apparent.

Consequently, it is very unlikely that Mr. Moore’s article will ever receive any mainstream media coverage whatsoever–just his being interviewed on FOX and Friends this morning.

The reason? In no particular order, because…

…it is simple enough for anyone to understand, and would totally destroy Barack Obama’s central campaign theme of inequality and class warfare.

…about 88% of political contributions from supposedly ‘impartial’ network television reporters, producers and other employees in 2008 went to Democrats.

If the mainstream media simply published these facts as a comparative analysis to this message, and applied just a fraction of the effort they unleashed against Republican primary candidate Herman Cain, causing him to cease his campaign—Obama’s message, along with his reelection campaign, would be “dead” by the end of the month.

But, as that is not likely, this single scenario proves, beyond the shadow of a doubt, the vaunted “Fourth Estate” has died from ‘terminal’ corruption—pun intended. 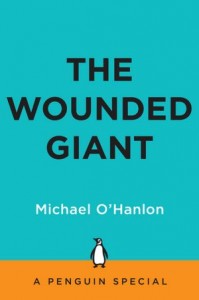 Purchase at Penquin Books or Amazon.com

Readers of NoisyRoom and Trevor Loudon’s site, New Zeal, know that I feel that Leon Panetta is a radical Marxist, who is also a clear and present danger to the United States of America. Panetta and Obama wish to cut billions from the defense budget – in fact, they have already done so, weakening the US dangerously. With WWIII looming with Iran, this goes far beyond foolishness and moves into the realm of treason.

Recently I was asked to review the book, The Wounded Giant: America’s Armed Forces in an Age of Aus­ter­ity, by Michael O’Hanlon. When I found out it covered our military budget and the consequences of severely cutting it, I couldn’t wait to read it. O’Hanlon goes where evidently our elitist leaders dare not go. He goes through several chilling scenarios on how we would handle catastrophic military events with a downsized military.

While I don’t agree on every issue (for example, I do not see China as a friendly rival – they are our enemy, plain and simple), the book is a great read and on a subject that we as a nation need to confront. O’Hanlon is a senior foreign policy fellow at the Brookings Institution and I find his depth of knowledge and expertise refreshing and enlightening.

O’Hanlon and I agree that the military could be streamlined. I believe that we should bring our troops home from theaters where we have been for decades – places where we are not needed and should not be – like Germany and other European countries. However, we cannot turn our backs on the likes of Russia, China, Iran, Venezuela and North Korea. It doesn’t matter if we don’t believe in war – our enemies do. The author acknowledges that there are dangers in cutting too much, which is a wise observation in this global life and death Sun Tzu chess match. Whereas, I agree with him on reducing troop sizes, that is only if we can avoid a nuclear Iran. Which, frankly, I don’t see happening.

One area that bears looking at is production for the military and supplying a war effort. Most of that has now gone offshore and it needs to be brought home. This would necessarily increase costs in some areas, but is vital to our military needs and infrastructure.

One other thought here… Though I believe we can cut costs by reducing our global military footprint, there is an argument for increasing military expenditures in light of Iran’s current aggression and the looming threat of a proxy war with Russia and China. Right now, we are viewed as weak because we have a weak and corrupt leader. We need to strengthen our military and not reduce our nuclear arsenal for reasons that should be obvious to anyone who does not live in a hole in the ground. Which may be what Israel and the US look like if we don’t get our act together militarily and soon.

This book should be read by every candidate out there – from the Presidency down to the lowliest of government positions. It is a road map for cutting waste and is well thought out and detailed. Strength through defense has always been the American way and The Wounded Giant stays true to the principle. I recommend the book – it is a subject each of us needs to learn more about and face head on.

LIMBAUGH: THE REAL TARGET OF OBAMA BIRTH CONTROL MANDATE IS THE CONSTITUTION

Just one outstanding story. As the story progressed, I began to think of Roger Locher as today’s America. Which leaves the question hanging out there: what will we be willing to do to rescue this great nation? What?