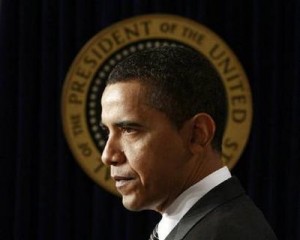 In issuing its latest controversial decree from on high – this one on contraception – the Obamanation has clearly, publicly, and intentionally crossed a line.  When it tells Roman Catholic institutions that they must provide contraceptives, what they are really telling Roman Catholics is that they must change their beliefs that the church has held for centuries.  Alternatively, the church can continue to believe that contraception is wrong, but provide the products and processes anyway, remaking itself into the same kind of two-faced entity exemplified by the Obamanation.

Understand, please, that the issue here is not contraception; nor is it the beliefs of the Roman Catholic Church.  It is critical to see through the hyperbolic fog surrounding this and get to the essence:  the Obamanation feels comfortable in decreeing to We The People what we can and must believe regardless of the issue of the day.  Whether you are a practicing, devout Roman Catholic or an Atheist, whether you are pro-life or pro-choice, the Executive Branch of your U.S. Federal Government has entered onto a slope that is slippery beyond what you can imagine.  Why?  Because the legal system in this country is based in large part on the principle of “precedent.”  That is, if the Obamanation assault on what you believe or don’t believe is not put out of its misery in its infancy, it will be used to extend the number and nature of White House decrees with increasing frequency.

What’s next?  Have plenty of paper and pens available when you begin your list because this tack the administration is taking is so fundamental that it can and will be applied across the board in the future.  Prefer incandescent light bulbs?  Legal immigration?  Jobs rather than handouts?  The historically standard marriage?  School systems that teach?  Right to Work laws?  Menu choices that you make? Taxation policy?  A Constitution that is observed?  The list goes on endlessly.  Just fill in the blank and save yourself lots of paper and ink.

There will be disagreement with my assertion, no doubt.  Some will scoff at the idea that the policy on contraception can and will be extended to other, seemingly unrelated issues if it is not stifled.  Remember though, this is the same alleged president who criticized the U.S. Supreme Court in front of the entire country during a State of the Union speech and has now begun the same kind of Super PAC he criticized in that speech, the same alleged president who promised “Shovel-Ready” jobs.  Numerous other examples abound in the relatively brief history of this administration.

Finally, at least for this column, the White House statement on its claim to have “conceded” to the firestorm of objections is another glaring falsehood.  The statement claims that it will not force the church to provide contraceptive services to church employees.  Instead, it will force the church’s insurance companies to pay for such procedures and supplies.  To begin with, even if it is implemented, such a measure would be done in the name of the church, thereby nullifying this “concession-in-name-only.”

And how could the administration possibly think that the insurance companies would provide such services and not charge the church?

The answer is:  Think again.  The Obamanation believes that everyone – the church in this case – will just love to believe one thing and act in a contrary manner because that is the way that this White House operates.