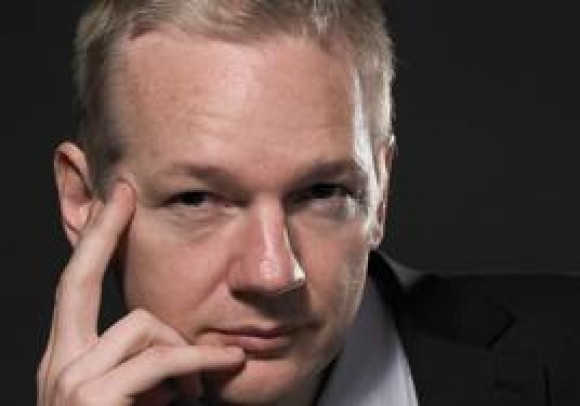 Gary Pruitt, President, Chief Executive Officer and Chairman of the Board of The McClatchy Company, insists the U.S. newspaper publisher “must maintain the highest standards of ethical conduct.” But how does this comport with being a “partner” of WikiLeaks, the controversial website that has just published stolen emails from the private company known as Stratfor?

WikiLeaks has listed McClatchy as one of its “public partners in the investigation” of Stratfor. Another American “partner” is Rolling Stone, the rock & roll magazine.

The hacker group Anonymous, which is under FBI investigation, has taken credit for the data theft. WikiLeaks founder Julian Assange is himself a computer hacker—convicted of penetrating a U.S. military defense network in his native Australia—and maintains close ties to the Russian government. He recently announced a television deal with Russia Today (RT), the Moscow-funded propaganda channel. He previously received a Russian visa, in a show of support from the Kremlin, which says he should get a Nobel Peace Prize for his Internet campaign against American interests worldwide.

George Friedman, founder and CEO of Stratfor, which obtains information about and analyzes world events for private companies and U.S. Government agencies, says the theft and publication of the emails are “deplorable, unfortunate, and illegal” actions.

The McClatchy Company is described as the third-largest newspaper company in the United States. It publishes 30 daily newspapers and provides information for some 1,200 clients of the McClatchy-Tribune News Service. It also has a digital news operation.

James Asher, Washington, D.C. bureau chief for McClatchy Newspapers, says his company wasn’t involved in the theft and hasn’t decided what is newsworthy about the documents they have received. In his mind, being a “partner” only means the company received the information and does not make it morally or legally culpable in how it was acquired.

“I wouldn’t use the word ‘partner,’ but what are you going to do?” he said. “I believe in the First Amendment and if they want to call us partner, they can. That’s not what we do.”

Asher is in charge of 40 reporters and editors in Washington and around the globe.

Stratfor CEO Friedman has cautioned the media about using the material, saying, “Some of the emails may be forged or altered to include inaccuracies. Some may be authentic. We will not validate either, nor will we explain the thinking that went into them. Having had our property stolen, we will not be victimized twice by submitting to questions about them.”

WikiLeaks claims the Stratfor material “contains privileged information about the US government’s attacks against Julian Assange and WikiLeaks and Stratfor’s own attempts to subvert WikiLeaks. There are more than 4,000 emails mentioning WikiLeaks or Julian Assange.”

It is not surprising that Stratfor would cover the case, since Assange is reportedly under investigation by the U.S. Government and one of his alleged sources, Army Private First Class Bradley Manning, is on trial for stealing classified information and aiding the enemy. Manning faces life in prison if convicted of the largest release of classified information in U.S. history. Some of the documents concern counter-terrorism operations in the Middle East and the vulnerability of top-secret facilities to terrorist attack.

One of the alleged emails from Stratfor refers to a secret U.S. Government indictment of Assange. But there is no independent evidence that such an indictment has been handed down.

On the other hand, evidence produced during Bradley Manning’s preliminary hearing revealed that Manning was in direct contact with Assange, making the founder of WikiLeaks into a co-conspirator in the theft and release of classified information. Such evidence could be used in an indictment of Assange on espionage charges. Assange has denied having any contact with Manning.

While it has no compulsion about engaging in a partnership relationship with WikiLeaks and getting Stratfor’s internal emails, McClatchy has its own policy on the need for employees to protect confidential information.

Asked if he would mind somebody stealing his emails and releasing them to the public, Asher said his emails weren’t that interesting. When I asked to see them, he laughed and said, “It sounds to me like you have an agenda, sir.”

Asked if McClatchy had done a story on WikiLeaks founder Julian Assange working for Moscow-funded Russia Today (RT) television, a controversial arrangement that raises questions about his political orientation, Asher said he wasn’t aware of that information.

However, some independent commentators have started raising questions about Assange’s agenda and loyalties.

GBTV founder and host Glenn Beck points out that Assange initially threatened to do a massive document dump that promised to be damaging to the Russians, but that the material was never released. Instead, Assange went to work for RT, regarded as a mouthpiece for the Russian government and its intelligence services. “He had to know he was going to be paid a visit by—the Russians,” Beck’s website points out. “They have a pattern of ‘silencing’ (read: murdering) journalists and others who damage Russia in one way shape or form. Assange never did release the Russian docs—instead, he now works for the Russian propaganda network RT News.”

Jeff Bercovici of Forbes accuses Assange of monumental hypocrisy by going to work for RT. He says “Assange, self-styled foe of government secrets and conspiracies of the powerful, is going to be a star on a TV network backed by the Kremlin. The same Kremlin that has done suspiciously little to investigate or prevent the killings and beatings of journalists that have plagued Russia for more than a decade.”

He added, “In November 2010, in response to reports that Wikileaks was on the verge of releasing documents that would incriminate powerful Russian politicians and companies, Assange told my colleague Andy Greenberg that ‘we have material on many business and governments, including in Russia.’ As is frequently the case with Assange, no such documents have ever emerged. Anyone want to bet on the chances that’ll ever happen now?”

The implication is that Assange is a Russian agent whose anti-American mission is now out in the open for all to see—except that his U.S. media “partners” may not want to investigate this part of the story.

SuperPAC for Ron Paul, Exit Polling (they want to cross-check):

Initial word is, turnout is low (which one might expect, with Romney and Santorum touted in the media as frontrunners; encouraging for Gingrich and his strategy in Washington, Saturday, and onward).

Mitt Romney in his accustomed environment