The photos below were taken at the CPAC Conference 2012 – and less than twenty two short days later we have lost bigger than life Conservative Warrior Andrew Breitbart.

Andrew Breitbart and Trevor at CPAC 2012

Andrew Breitbart and Cliff Kincaid (Accuracy in Media) at CPAC 2012

Please hug your children that one extra hug tonight, tell your loved one how much they mean to you, ring that friend you have been meaning to contact for so long and stand up and fight the fight that needs to be fought for we just never know what next week, tomorrow or even the next minute holds.

My personal mantra is to live a life filled with few regrets and I am betting Andrew Breitbart was a man who went to sleep each night with the knowledge of a job well done, far from finished but with few regrets.

Do you ever get that funny feeling that something is just not right–in the Obama Administration?

Well, then you have been joined by Sen. Rob Portman (R-OH), former Bush Administration Office of Management and Budget director, and Sen. Clare McCaskill (D-MO), who on Wednesday blasted out letters to 11 federal agencies asking for detailed information about public relations and advertising contracts over the past three years, according to a FOXNews article today.

Both Senators were compelled by several reports they received, indicating that the Obama Administration has spent millions of taxpayer dollars to promote the president’s political agenda, which is not acceptable, versus informing the public about government programs.

“It’s a longstanding concern. … The question is, what are they paying for public relations services?” Portman told Fox News today. “Sometimes it’s legitimate, to help educate the public about something that the government is doing. … but often, it’s spin.”

Both Sen. Portman and Sen. McCaskill are the top lawmakers on the Contracting Oversight Subcommittee, within the Senate Committee on Homeland Security and Governmental Affairs, and as such, they are requesting the names of contractors, the amount of money spent, descriptions of the work and other details.

One of the first is a “major document request” aimed at the Department of Health and Human Services, headed by HHS Secretary Kathleen Sebelius. A Portman aide said they were probing publicly funded “spin,” cited in a report last summer by Judicial Watch, which specifically identified millions spent on the promotion of the new federal health care overhaul—commonly referred to as “Obamacare.”

A 2010 email with one Ogilvy executive, indicated that officials wanted to use the “bulk” of the $3.5 million paid … “on media that reaches African Americans and Hispanics.”

According to HHS, it was a “critical” way to make sure people are aware of their “rights, protections and benefits” under the health care law.

The Portman aide pointed to a 2010 House Oversight and Government Reform Committee report, claimed that … “The Obama administration frequently used federal resources to promote the president’s agenda,” [such that] “ordinary Americans have financed and been exposed to an unprecedented number of public relations and propaganda efforts” … since the beginning of the Obama administration.

“The president’s right to sell his policy recommendations to Congress and the public is not disputed; however, using the resources of the federal government to activate a sophisticated propaganda and lobbying campaign is an abuse of office and a betrayal of the president’s pledge to create ‘an unprecedented level of openness in government’.”

Shining a bright light into this backroom will cut off yet another source of taxpayer funds, forcing Barack Obama to sacrifice his own campaign war chest in an attempt to distract voters from his disastrous presidential record.

So–fuel made from pond scum and free birth control for women is his “Plan B”?

You have to admire Obama’s audacity… 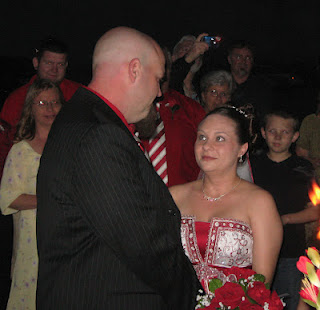 My son William and his sweetheart Abbey were married last night on the same beach he proposed to her a year ago. Bolivar Peninsula isn’t the easiest destination, requiring a very long road trip or, as an alternative, a short ferry ride across the ship channel. It was a lovely ceremony in spite of the mosquitoes which showed up as uninvited guests.

After the wedding we got into our vehicles for the trip back to Galveston where the reception was to be held. Some of the wedding party made it onto the ferry which was already loading while the rest of us got to wait in line for the next boat. The security detail randomly selected vehicles and pulled them out of line to be searched just like they do at the airports. Mind you, this is a public road with a ferry; not really any different than crossing a body of water over a bridge, so it bothered my sense of right and wrong to watch Gestapo tactics being employed.

Wouldn’t you know, these goons singled out two vehicles from the wedding party, one of them had my son and his bride wearing her beautiful wedding gown. My new daughter-in-law exclaimed, “You’ve got to be kidding!” They were not, as she stood on the pavement, wedding dress gathered in her arms to keep it from getting oil on it. They searched the entire car; engine compartment, trunk and the interior, as if it were a piece of luggage at the airport looking for what… explosives, drugs or nail clippers? You tell me.

I remained in my car, grumbling loudly as the veins in my neck began to swell; but not so loudly as to make a scene. The last thing I wanted was to wreck the night for these kids on their honeymoon. I knew I could do more with a keyboard the next day and besides, the goons wouldn’t have comprehended the meaning of the Fourth Amendment, they were simply “doing their jobs.”

The Fourth Amendment as contained in the Bill of Rights:

Historically, the Fourth Amendment was a direct result of colonial days and British “General Warrants,” issued by the King which ignored anyone’s reasonable expectation of privacy. In Virginia, a law was drafted to protect individuals from this infringement on liberty.

“That general warrants, whereby any officer or messenger may be commanded to search suspected places without evidence of a fact committed, or to seize any person or persons not named, or whose offense is not particularly described and supported by evidence, are grievous and oppressive and ought not to be granted.”

Searches carried out randomly are grievous and oppressive as they support the idea that everyone is guilty until proven otherwise. Searches conducted without cause by a government official mean the search was conducted capriciously and had no merit other than curiosity.

The Supreme Court has issued several rulings or exceptions, as found on the Wikipedia pages, that apply to the Fourth Amendment which tend to dilute its original intended purpose. That having been said:

“Where society’s need is great and no other effective means of meeting the need is available, and intrusion on people’s privacy is minimal, checkpoints toward that end may briefly detain motorists.” (Michigan v. Sitz, 1990)

I’m not a legal scholar, but that comes off as vague to the point of being useless if we’re trying to justify violating the Fourth Amendment protections afforded individuals, at least from the founding father’s standpoint. “Society’s need,” it would appear the Supreme Court might have forgotten which country they were in. Society’s needs NEVER justify denying a God-given individual right. If this concept isn’t clear by now then none of the other protections offered by the Bill of Rights and Constitution mean anything either.

“In 1979, (Delaware v. Prouse) the Supreme Court stated that, absent articulable and reasonable suspicion that a motorist is unlicensed or that an automobile is not registered, or that either the vehicle or an occupant is otherwise subject to seizure for violation of law, stopping an automobile and detaining the driver in order to check his driver’s license and the registration of the automobile are unreasonable.”

That ferry check point is starting to look a bit shaky. If these goons where searching for contraband of any kind, then the check point was clearly a violation of law unless they had a signed search warrant based on probable cause. Yea, right! I forgot to notice the dates; we are in retrograde mode.

As John Locke explained many years ago:

“The end of law is not to abolish or restrain, but to preserve and enlarge freedom. For in all the states of created beings, capable of laws, where there is no law there is no freedom. For liberty is to be free from restraint and violence from others, which cannot be where there is no law; and is not, as we are told, ‘a liberty for every man to do what he lists.’ For who could be free, when every other man’s humour might domineer over him? But a liberty to dispose and order freely as he lists his person, actions, possessions, and his whole property within the allowance of those laws under which he is, and therein not to be subject to the arbitrary will of another, but freely follow his own.”

If that antique wording went over your head, it means that individuals have certain inalienable rights which cannot be usurped regardless of how many of his/her neighbors gather to abolish or reduce those inalienable rights. People can give to their government ONLY that which they themselves have individually.

Our Declaration of Independence pointed to this idea as we separated from the rule of Great Britain and its King.

“We hold these truths to be self-evident, that all men are created equal, that they are endowed by their Creator with certain unalienable Rights, that among these are Life, Liberty and the pursuit of Happiness.–That to secure these rights, Governments are instituted among Men, deriving their just powers from the consent of the governed,..”

Ezra Taft Benson in his talk, The Proper Role of Government, quoted the Alabama state constitution.

“That the sole object and only legitimate end of government is to protect the citizen in the enjoyment of life, liberty, and property, and when the government assumes other functions it is usurpation and oppression.”

This idea has been around since before governments were instituted by men and, as far as can be determined, can be found in every state’s constitution; worded in various and yet a similarly structured manner.

The moment we as a people permit our government representatives, be they elected or appointed, to violate individual’s God-given rights as protected by our Constitution and Bill of Rights, at that moment we have thrown hundreds of years of blood, sweat and tears in the trash. We will have taken these precious documents and publicly abandoned the principles upon which they were formed and recorded.

Regarding public servants working at airports, ferry landings or setting up random check points along our roadways; these security measures were put in place to make everyone feel “safer,” but are in fact, earmarks of a police state having been installed in direct conflict with everything our nation stands for. You cannot excuse yourselves by saying, “I was only doing my job.”