By: Malcolm A. Kline
Accuracy in Academia 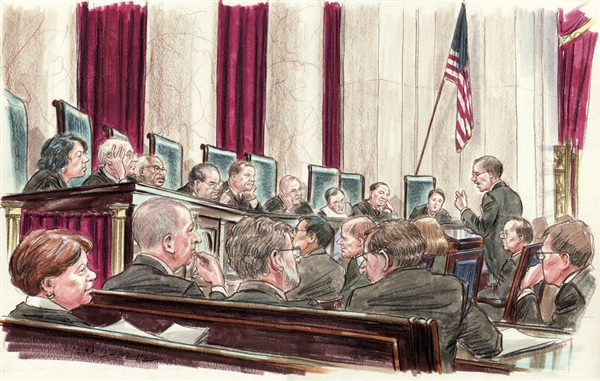 There is an obvious teachable moment in the Supreme Court case this week which tests the constitutionality of the Obama Administration’s health care program but most law professors will probably miss it. “The Supreme Court will hear six hours of argument over three days, the longest in 47 years,” of cases heard by the highest court in the land, Randy Barnett of the Georgetown University Law Center pointed out at the Cato Institute on Friday, March 23, 2012. “That alone proves it’s not a constitutionally frivolous case, which 99 percent of my law professor colleagues have been saying.”

While Barnett may have been using that number for effect, it is difficult to find law professors not echoing that theme. “The government has no answer, either in press conferences or in court, as to what the limits are on the law,” Barnett averred at the libertarian think tank.

Barnett disclosed that he is representing the National Federation of Independent Businesses (NFIB) in the suit. He argues that the law is unprecedented, unlimited, unnecessary and dangerous.

“The argument that health care is different [from other forms of economic activity the government may choose to regulate] won’t matter in the future since the precedent has been set,” Barnett maintains. Conversely, Barnett notes, “The government concedes that if the mandate goes, the regulations go.” That would include the one forcing Catholic institutions to provide contraception, sterilization and abortifacients.

“The so-called mandate is really a shared-responsibility payment, which sounds kind of Ronald Reagany,” Elizabeth Wydra of the Constitutional Action Center (CAC) insists. The CAC is “a think tank, law firm, and action center dedicated to fulfilling the progressive promise of the U. S. Constitution’s text and history,” according to Wydra’s bio.

Wydra also served as “a supervising attorney and teaching fellow at the Georgetown University Law Center appellate litigation clinic,” her bio shows. Had she stayed with that gig, she could have worked with Georgetown’s most famous law student (at least currently)—Sandra Fluke.

Wydra claims that she is representing 500 state legislators in the Supreme Court health care case.

“In 2004, Barnett appeared before the U. S. Supreme Court to argue the medical cannabis case of Gonzalez v. Raich,” his bio reads. “After Raich, Congress has unprecedented powers,” Barnett said at Cato. “Nevertheless, the court did not give Congress the power to demand that people grow marijuana,” he noted, bringing it all back home to the health care debate currently before the court.

Malcolm A. Kline is the Executive Director of Accuracy in Academia.