New facts and information have leaked out lately, causing the foundation of U.S. Attorney General Eric Holder’s Department of Justice to crumble beneath his feet–especially at ATF and FBI–due to their primary leadership roles in the ill-conceived, negligently executed “Operation Fast and Furious.”

As a reminder, these agencies allowed about 2,000 military assault weapons to be purchased and transported by members of the Mexican drug cartels, who seem to operate freely on either side of our ‘more secure than its’ ever been’ southern border. Some of these weapons were used to murder border patrol agent Brian Terry, and tens of thousands of Mexicans.

This past week, as reported in William LaJuenesse’s article Saturday, FOXNews learned that Congressional investigators were being supplied with potentially damning documents, through a leak at the Justice Department, which confirmed seemingly flippant FBI operational involvement of their own in the affair.

Eric Holder, repeatedly and smugly addressed the Government Oversight and Reform Committee led by Rep. Darrell Issa (R-CA), and aided by Sen. Charles Grassley (R-FL), complaining that all relevant documents to this investigation, some 20,000 pages, had already been handed over during the past 15 months of the investigation.

This is just the latest confirmation in a long line of pre-meditated omissions–in the shadow of the fact that DOJ had already supplied its’ own internal investigation unit with some 80,000 pages of Fast and Furious related documents.

On Friday, Sen. Grassley said … “You are getting at the very basis of this investigation–but I have to wait till we have all the information before we bring down the hammer.”

In response, the FBI released this statement Friday, “There is a pending investigation and we cannot provide additional information, even when there is inaccurate information being reported.”

Last week, an ATF ROI (Report of Investigation) from May 2010, shows that Manuel Celis-Acosta, ringleader of the illegal gun buyers, was stopped at a border checkpoint in Arizona with 74 rounds of ammunition.

Then on Thursday, Issa and Grassley released a list of ROI’s that show ATF agents had evidence Acosta was trafficking weapons, and that one of his buyers, Uriel Patino, was lying on federal forms.

Department of Justice Assistant Attorney General Ron Weich warned Issa, “We are deeply disturbed that [this] sensitive law enforcement information…has entered the public realm,” further claiming that it was impeding the DOJ’s prosecution of current criminal cases arising from Fast and Furious.

Without apology, a Congressional spokesperson for Issa said [these documents] “are precisely what the Justice Department is hiding and what congressional investigators are seeking – basic information about who knew what, when, about Fast and Furious.”

Now the long line of lies, cheating and cover-ups are unraveling the very fabric of the agency.

FOXNews has obtained an ATF internal memo, detailing a rank-and-file survey that reveals the Fast and Furious gun-walking operation has caused a complete collapse of confidence in the leadership, at all levels of the DOJ, according to Maxim Lott’s FOXNews article today.

“Most troubling were responses to the [statement] … ‘My senior leaders maintain high standards of honesty and integrity.’”

Only 44 percent of ATF employees believe their leaders held such standards last year.

ATF spokesman Drew Wade acknowledged the Fast and Furious scandal has taken a toll on morale. “The controversies plaguing ATF over the last year have weighed heavily on the morale of employees and their faith in senior leadership,” Wade said. “Mistakes were made.”

Libyan strongman Muammar Gaddafi ruled Libya with an iron fist for 32 years, before a similar percentage of his people famously ignited the “Arab Spring,” which surreptitiously ended his reign.

Amazingly, it seems that U.S. Attorney General Eric Holder has managed to produce the same level of viral discontent amongst his constabulary in only 31 months.

By: OldIronsides
Conscience of a Conservative

Andrew Breitbart’s web site lives on even after his passing. Here is a great story about our very own American traitor, Jane Fonda and the news that a leftist film maker in Hollywood has cast Hanoi Jane to play Nancy Regan in a new movie. You do remember Jane Fonda’s infamous scene sitting on a North Vietnamese anti-aircraft gun during the Vietnam War.

There are left-wing actresses and then there’s Jane Fonda. Fonda isn’t merely a left-wing actress or a liberal or even a Leftist; Fonda is a traitor to her country and one of the most morally illiterate, divisive and polarizing figures to ever come out of a womb, much less Hollywood.

Conservatives will stomach certain actors and actresses, even if that individual has gone out of their way to constantly insult who we are and what we believe in. Jane Fonda, however, is something lower than that. She doesn’t simply hurl insults at us, she’s given aid and comfort to those who were not only were fighting to enslave an entire population under communism, but were killing the American servicemen selflessly fighting to keep that population liberated.

What I’ve written above is no secret to anyone and that includes the director of “The Butler,” Lee Daniels, the man who made the decision to cast this wretched anti-American woman as a conservative icon. Worse still, a conservative icon who’s still very much alive.

In the midst of recruiting an all-star ensemble for his long-gestating passion project “The Butler,” director Lee Daniels has tapped Jane Fonda to play Nancy Reagan.

Also, in case you have forgotten, Hanoi Jane also made radio broadcasts to our troops from Hanoi. Here is a transcript from a veterans web site: http://www.1stcavmedic.com/jane_fonda.htm which also provided the photos used above.

[Broadcast]
This is Jane Fonda. During my two week visit in the Democratic Republic of Vietnam, I’ve had the opportunity to visit a great many places and speak to a large number of people from all walks of life- workers, peasants, students, artists and dancers, historians, journalists, film actresses, soldiers, militia girls, members of the women’s union, writers.

I visited the (Dam Xuac) agricultural coop, where the silk worms are also raised and thread is made. I visited a textile factory, a kindergarten in Hanoi. The beautiful Temple of Literature was where I saw traditional dances and heard songs of resistance. I also saw unforgettable ballet about the guerrillas training bees in the south to attack enemy soldiers. The bees were danced by women, and they did their job well.

In the shadow of the Temple of Literature I saw Vietnamese actors and actresses perform the second act of Arthur Miller’s play All My Sons, and this was very moving to me- the fact that artists here are translating and performing American plays while US imperialists are bombing their country.

I cherish the memory of the blushing militia girls on the roof of their factory, encouraging one of their sisters as she sang a song praising the blue sky of Vietnam- these women, who are so gentle and poetic, whose voices are so beautiful, but who, when American planes are bombing their city, become such good fighters.
I cherish the way a farmer evacuated from Hanoi, without hesitation, offered me, an American, their best individual bomb shelter while US bombs fell near by. The daughter and I, in fact, shared the shelter wrapped in each others arms, cheek against cheek. It was on the road back from Nam Dinh, where I had witnessed the systematic destruction of civilian targets- schools, hospitals, pagodas, the factories, houses, and the dike system.
As I left the United States two weeks ago, Nixon was again telling the American people that he was winding down the war, but in the rubble- strewn streets of Nam Dinh, his words echoed with sinister (words indistinct) of a true killer. And like the young Vietnamese woman I held in my arms clinging to me tightly- and I pressed my cheek against hers- I thought, this is a war against Vietnam perhaps, but the tragedy is America’s.

One thing that I have learned beyond a shadow of a doubt since I’ve been in this country is that Nixon will never be able to break the spirit of these people; he’ll never be able to turn Vietnam, north and south, into a neo- colony of the United States by bombing, by invading, by attacking in any way. One has only to go into the countryside and listen to the peasants describe the lives they led before the revolution to understand why every bomb that is dropped only strengthens their determination to resist. I’ve spoken to many peasants who talked about the days when their parents had to sell themselves to landlords as virtually slaves, when there were very few schools and much illiteracy, inadequate medical care, when they were not masters of their own lives.

But now, despite the bombs, despite the crimes being created- being committed against them by Richard Nixon, these people own their own land, build their own schools- the children learning, literacy- illiteracy is being wiped out, there is no more prostitution as there was during the time when this was a French colony. In other words, the people have taken power into their own hands, and they are controlling their own lives.

And after 4,000 years of struggling against nature and foreign invaders- and the last 25 years, prior to the revolution, of struggling against French colonialism- I don’t think that the people of Vietnam are about to compromise in any way, shape or form about the freedom and independence of their country, and I think Richard Nixon would do well to read Vietnamese history, particularly their poetry, and particularly the poetry written by Ho Chi Minh.

Giving aid and comfort to the enemy is a crime. It is called Treason and the penalty is death by hanging. There is no Statute of Limitations for this crime which means she can be prosecuted at any time. How prolific it was for Jane to star in the 1965 movie Cat Ballou with this scene and then make her infamous visit to North Vietnam in 1972. Was she foretelling her own eventual future? 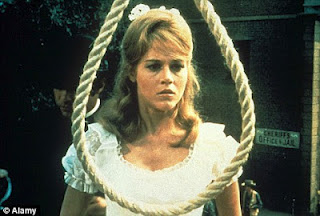