We’ve been treated to a display of racism which should make your stomachs turn sour this past week. The same folks seem to find their way into the spotlight while at the same time working their magic to turn an already tragic event into a spectacle of epic proportions based on the color of a man’s skin. I’m referring to Trayvon Martin’s being shot by a lighter colored man of Hispanic lineage whom the media characterized as “white.”

Here in Texas, “State Representative Garnet Coleman, D-Houston, set his sights on revising Texas’ “Castle Doctrine,” similar to Florida’s “stand your ground” law linked to the Trayvon Martin slaying.” This appeared in an article in the Houston Chronicle where it continued:

“Coleman says a 2007 change that eliminated a “duty to retreat before using deadly force” clause in the law makes it too easy for Texans to shoot first.”

Rep. Coleman apparently doesn’t believe individual citizens have the right to defend themselves and should run or hide until properly trained police officers arrive; never mind the chance you might already be maimed or killed. I like the old truism, “When seconds count, the police are only minutes away.”

“South Texas College of Law professor Gerald Treece, who believes Coleman’s proposal doesn’t stand much of a chance said, “You can be a man in Texas and stand up for yourself without retreating.”’

I don’t think the race pimps will be happy either way, so maybe a different approach toward media coverage of those killing each other might be in order; a means of determining when a simple killing becomes a hate crime. There needs to be a standardized color chart, something which the news media can use to determine if race may or may not have been a contributing factor when someone of “color” gets shot dead.

Several years ago our home owner’s association sent us a notice demanding we paint our house, an item on my “honey do list” which I agreed was needed. A couple of days later another letter came, a form which I was supposed to fill out to get permission from the home owner’s association to paint the house. I had to wonder, did their left hand know what the right hand was doing?

I called the folks at the home owner’s association and was informed that the house had to be painted in “earth tones” which they approved, but when asked to supply me with a list of approved “earth tones” they couldn’t come up with one. Eventually they dragged their feet to the point where I painted the house the same color as was on it already and told them if they didn’t like it to take me to court. They dropped the issue and never did come up with a list of approved “earth tones.” 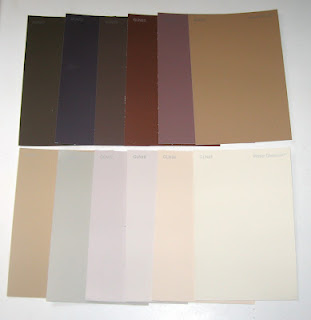 This morning, I went by the local Home Depot and grabbed a variety of paint sample cards, twelve shades which come close to human pigmentation, close enough for “government work” anyway. When the State legislature acts on this recommendation, here’s how it might work:

If a person is shot by someone whose skin color is at least 2 shades lighter then it automatically becomes a hate crime based on racial prejudice; however, if the person who gets shot down, blood running from the multiple gunshot wounds, if that person has a lighter skin tone, then it’s just your every day act of violence which is to be expected. This should clarify the insanity which prevails in our society.