The text to go with it, in the Daily Caller, Neil Monro’s employer:

In a video interview, The Daily Caller’s White House correspondent Neil Munro answered questions about his exchange with President Barack Obama in the Rose Garden. 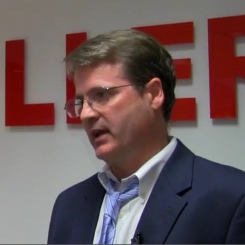 “I shouldn’t be the story. The important thing is the president’s policy today, which could have a significant impact on American workers. I asked a question about that. Admittedly, it was in the middle of his speech. I thought he was ending his speech — his statement — but then I asked a question at the end and he turned his back on the reporters and walked away,” Munro said.

“Timing these things is a little awkward. He speaks very well, very smoothly — very nice delivery. It’s hard to know when he’s about to end. I thought he was going to end today. I asked my question too early. He rebuked me. Fair enough.”

Before coming to The Daily Caller, Munro worked at National Journal for over a decade. He has also reported for Defense News and Washington Technology. Judging from his experience, Munro says open press events at the White House are “well designed by the president and his staff.”

“He comes out of the Rose Garden, gives a short statement and then turns his back and walks away very quickly without taking questions,” he said. “Sometimes he takes questions. He took a question on Trayvon Martin in March. Sometimes these shouted questions at the end work — not today: He refused to answer an obvious and conventional question about the impact of his policy on American workers at a time of record unemployment.”

By the way this is the White House that is among so man other more essential tyrannies-and-things, working on requiring reporters to use White House PC’s.