President Barack Obama began his campaign bus tour through the swing states of Ohio and Pennsylvania, which are part of the manufacturing heartland of the United States that has seen 599,000 of those jobs disappear during his first term–and the official June jobs report indicates that new job creation has been on a backslide for three months straight, according to a FOXNews article today.

The Labor Department was the barer of bad news today, as they reported an anemic 80,000 private sector jobs were added in June, marking the third straight month of weak hiring and raising concern that the economy has taken a turn for the worse–as we had been predicting.

To put it in perspective, during the first quarter of the year an average of 226,000 were created in the private sector, whereas in the second quarter the average was a paltry 75,000 jobs.

More disturbing is that about one-third of the jobs gained in June were in temporary services, and although manufacturing accounted for 11,000 jobs–its ninth straight month of gains–the rate of growth in factory jobs slowed sharply in the second quarter compared to the first.

Also, last month the Fed downgraded its economic outlook for 2012, predicting growth of just 1.9 percent to 2.4 percent for the year and little change in the unemployment rate.

And finally, the jobless rate remained frozen at 8.2 percent–capping a crummy second quarter for job seekers.

Once again, the facts are already flying in the face of the ‘we’ve been going in the right direction’ rhetoric the president has been barking on the trail–as he tries to woo desperately needed blue color workers back to his camp.

And a quick look back at job growth and corresponding unemployment rate graphs and data for the 1990 and 2001 recessions, as provided in Bill McBride’s June 7, 2009 article in his blog “Calculated Risk,” are pretty grim for the president at this stage of the game too.

McBride describes the 1990 Recession and Recovery as being “jobless” also…

Also, discouraged workers usually start to return to the workforce as the economy recoveries–increasing the labor force and pushing up the unemployment rate–if there are insufficient job gains.

President George H.W. Bush lost reelection after just one term to Bill Clinton, entirely based on the single line…”it’s about the economy stupid,” because the unemployment rate hit 7%.

President Bill Clinton held court over the country when the “dot.com” stock market boom launched the recovery from the 1990 recession, providing America with an unprecedented 6 year run of prosperity.

But, as with everything else, it reached the end of its life cycle and began to disintegrate during 1999, culminating in a market meltdown, the aftermath of which was handed over, along with the presidency, to George W. Bush in January 2001; on September 11th of that year the terrorist attacks on our nation hammered near term recovery hopes.

McBride also used the word “jobless” to describe the 2001 Recession and Recovery:

This is similar to the 1990 recession in that the unemployment rate continued to rise for 19 months (corrected) following the end of the recession.

However, following the 2001 recession, the labor market remained very weak with several months of substantial job losses … [while] the [labor] ‘participation rate’ declined sharply–suggesting a large number of discouraged workers.

The graph of the data clearly show that the 2001 Recession was less severe than 1990 in terms of the rise in unemployment, where it began at 4.5%, then averaging 5.75% during the job growth “neutral” period between month 13 and 33, then falling to 5.3% in the 48th months after 14 months of substantially consistent job creation.

The recovery from the 2001 recession was ignited by the “Real Estate Boom,” which began in 2002, where “easy money” allowed nearly anyone who was over 18 and could “fog a mirror” to get a nothing down mortgage.

This sent property values rising so fast that “real estate trading” took the place of “day trading,” born during the aforementioned dot.com boom.

Unfortunately for President Barack Obama, there will be no “green energy” boom to launch our recovery from the economic and emotional doldrums imposed by he and the Democrats litany of anti-capitalism and pro-socialism policies.

Any president should realize that if they need to go on tour to “tell” the people that things are getting better–there is no savior for them on the horizon.

WASHINGTON DC – Jubilant scientists at the DNC’s High Speed Word Collider (HSWC) announced today they have conclusively disproven the existence of Roberts’ Taxon, the theoretical radioactive Facton particle that some had worried would lead to the implosion of the entire Universal Health Care System.

continues, including graphic depiction as below 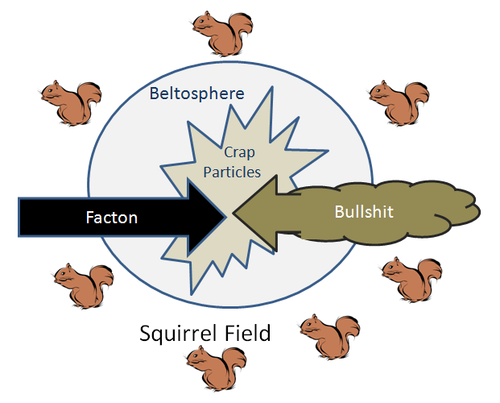 Gulag Note: Still pondering what must seriously be explored concerning the Chief Justice.

Congressmen urge the UN to trample the US Constitution