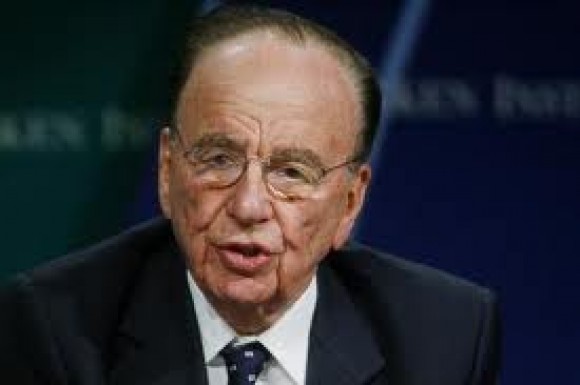 Rupert Murdoch is upset with the Mitt Romney campaign and its failure to go after Barack Obama. Murdoch says he wants to “save us from socialism” but that Romney, who told Bill O’Reilly that he doesn’t want to call Obama a socialist, isn’t prepared for the task ahead. Murdoch refers to the tough “Chicago pros” around Obama. They “will be hard to beat unless he [Romney] drops old friends from team and hires some real pros.”

Murdoch should take a look at his own network. While O’Reilly and Sean Hannity have examined some of the controversy over Obama’s socialist agenda, there is a bigger story to tell—one that could win the channel a major journalism prize. It is the Obama connection to Communist Party member Frank Marshall Davis.

Of course, if Murdoch wants to get tough, he could start by bringing back Beck—Glenn Beck, that is. Glenn Beck wasn’t afraid to tell the truth about Obama—and his associates, such as Van Jones, and Obama’s patron, George Soros. That may have been what got him fired.

However, it is because of Beck and his book publishing imprint, Mercury Ink, that we can soon look forward to the release of Paul Kengor’s masterful The Communist: Frank Marshall Davis: The Untold Story of Barack Obama’s Mentor. Its official release date is July 17 but I have been able to review it in advance. It is a blockbuster that will make you tremble for the future of our country.

At about the same time, Joel Gilbert’s provocative film, “Dreams from My Real Father,” is scheduled for official release. Fox News could and should cover it now. I’m sure Gilbert would provide a copy to them, if they do not already have it. I have seen this film in advance. It, too, is devastating. It will make you wonder what we really know about Obama, not in terms of where he was born, but his political agenda and personal loyalties.

The Kengor book and the Gilbert film both focus on “Frank,” as he was called in Obama’s Dreams from My Father. Kengor explains the basics: “Frank Marshall Davis was introduced to Obama by Obama’s grandfather, Stanley Dunham. Dunham introduced his grandson to Davis in the 1970s, by one account as early as 1970. He did so for the purpose of mentoring. And what a mentor he chose: Davis had been a literal card-carrying member of Communist Party USA. I have seen the FBI pages that list Davis’s actual CPUSA number, which was 47544. I reprint the FBI pages in the appendix of my book. Davis did outrageous pro-Soviet propaganda work for CPUSA organs like the Chicago Star and the Honolulu Record. His writings unerringly parroted the Soviet line. Like other CPUSA members, he was a loyal Soviet patriot.”

The other day James Rosen, of the Fox News Washington, D.C. bureau, did a story noting some of the discrepancies uncovered by David Maraniss in Obama’s book, Dreams from My Father. The Maraniss book, Barack Obama, the Story, is sympathetic to Obama but questions some of the claims that he made about his own family background and associates. However, Maraniss only goes so far in documenting how Obama lied about his upbringing. He plays down the influence of Davis, even while noting that Obama met with the communist “ten to fifteen times” during their years together in Hawaii.

Kengor comments, “…Maraniss doesn’t provide his source, but I’m assuming the source is Obama himself, whom Maraniss interviewed for this book. I haven’t seen that figure cited anywhere else. Already, in my early interviews for my book before its official release, I’ve been asked how often Obama met with Davis. My answer was that I didn’t know, and could only document the occasions that Obama documented in Dreams from My Father.”

Isn’t it incredible that Maraniss is the first mainstream journalist apparently to have questioned Obama about his relationship with a member of the Soviet-funded and controlled CPUSA? And that it has occurred almost four years after his election to the presidency? It makes you wonder if the FBI is aware of any of this, and what conclusions FBI director Robert Mueller and other officials concerned about our nation’s security came to regarding their “Commander-in-Chief.” J. Edgar Hoover would have gone through the roof.

Kengor notes that 10 to 15 meetings “is indeed quite notable, especially given the nature of these one-on-one meetings and their duration—often long late-night evenings together. In my book on Davis, I speculate on specific areas of politics and policy where Davis might have influenced Obama, from redistribution of wealth to nationalizing healthcare to General Motors (plus much more). In his memoirs, Obama doesn’t dare go into any of that. But such lessons at the knee of the extremely political and outspoken Davis could have easily occurred at any of these many meetings.”

Joel Gilbert examines the Marxist influence of Davis but goes beyond Kengor to looking at the issue of paternity. He tells AIM, “While Fox has covered Obama’s book, noting that it is largely a fairy tale, they have failed to ask the next question: what is true? My film Dreams from My Real Father provides a plausible and likely alternative that seems to be much closer to the truth.” That truth, as Gilbert sees it, is that Obama lied about the identity of his real father, who wasn’t the “Kenyan goat herder,” Barack Hussein Obama, but rather Frank Marshall Davis.

We know that Obama concealed the identity of “Frank” in his book. But did the cover-up extend to the evidence that Davis was in fact Obama’s real father? That is the persuasive case that Gilbert makes in his film. “Fox should investigate this theory,” Gilbert says. Lacking DNA evidence, definitive proof may not be forthcoming. But Gilbert has done his homework, based on extensive interviews, fact-finding in Hawaii, and the work of other investigators. The extraordinary side-by-side photos of Obama and Davis over the years are enough to convince anyone with two eyes that there may be a relationship.

These two researchers, Kengor and Gilbert, could explain, better than anyone, the mystery in the Oval Office. All that it would take is an order from Murdoch to Roger Ailes, president of Fox News, to get to the bottom of the controversy over Obama’s Marxist roots. Four years after Obama was elected president, isn’t it about time for what the late Andrew Breitbart called “the Vetting?”

Directing his comments to Rupert Murdoch personally, Gilbert says, “Why doesn’t Murdoch do his job—rather than worrying about Romney’s campaign?”