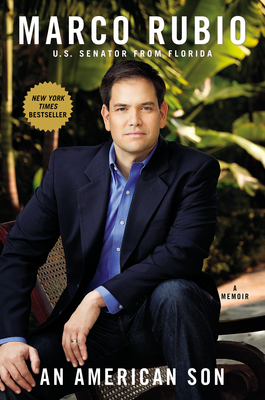 Purchase at Penguin.com or Amazon.com

Marco Rubio, at age 41, is one of the leading contenders for Mitt Romney’s VP choice and has written an autobiography: An American Son – A Memoir. The son of Cuban immigrants, Rubio is a rising star in the Republican political arena.

Although there are numerous issues I do not agree with Senator Rubio on, his story is an American one and inspiring. I don’t know anyone who wouldn’t get choked up as Rubio relates his Senate victory:

I looked to my left and saw my mother coming up the steps to the stage. She turned eighty that day. My election had brought her joy on her birthday, and I choked up with gratitude. She had once dreamed of becoming an actress, but spent her working life mostly as a maid. Absent from the celebration was my father. He had lost a short battle with lung cancer less than two months earlier. He hadn’t lived long enough to see me elected to the Senate, although he died believing I would be. He had wanted to be a business owner, to be his own boss, but instead had settled for work as a bartender. My parents relinquished their ambitions without resentment to make a comfortable and stable home for their children. They couldn’t give us everything we wanted, but they made certain we had everything we needed. We were children of privilege: secure, happy and loved.

Their lives, too, were stories of loss and hope and love. Those stories, the preface to my own, began on a Caribbean island little more than two hundred miles from where I stood that night as a newly elected United States senator with debts to pay.

I came away from this book feeling that Marco Rubio is a good man, a moral man. Perhaps not perfect – none of us are, but a man who seeks to do what he feels is right while not losing his conservative soul. Rubio has a deep respect and love for Ronald Reagan as I do. Family means the world to him and his faith guides his thoughts, motives and actions. Character matters and he has that and more.

The book takes you through his life. His struggles, him ambitions, his wins and his losses. You will see what his 2010 Senate campaign was like in detail, a rare glimpse into the political workings that are nothing less than a grueling match where winner takes all and the loser sinks into obscurity. Life and death in the political arena.

The book also clarified some misconceptions I had of Senator Rubio. He was against the Dream Act – although he admits that he would have come here illegally just to live in America if he had to. Is there any one of us who if push came to shove probably wouldn’t do the same? To save my family, my loved ones and myself… I’m sure faced with that choice, I would too. But, I would have righted it as soon as possible, as we did for my son-in-law from Denmark who came here legally – it was the right way to do it. The law is there for a reason and must be upheld. Rubio supports English as our language, which I heartily agree with as well. He gives his views on the Arizona immigration law and offshore drilling and much more.

I came away liking Rubio more than I had. Once you hear his story, you’ll feel the same way. His book is honest, candid and very thoughtful. You will be taken on a journey from 1956 in Fidel Castro’s Communist Cuba to Miami and Las Vegas where his parents worked blue collar jobs for a better life for their children. You’ll discover Rubio’s love of history and his quick wit and intelligence. I enjoyed the book and I respect Marco Rubio. He is the essence of America in many ways… hard work, faith and determination – he follows the American dream and is truly An American Son.

Part 1 – in defense of the filibuster

Part 2 – on why Obamacare will be a disaster

Part 3 – more on life in the Senate

One thought on “Book Review: Marco Rubio – An American Son”