Well, the latest mass shooting has occurred. So far, fourteen innocent lives have been lost.

Our compatriot, Maggie Thornton is covering the incident and its coverage: 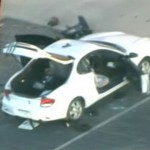 Just after midnight Rocky Mountain Time today, a man opened fire on crowd at the sold out Batman: The Dark Knight Rises at Aurora, Colorado’s Century Movie Theater 16 in Theater No. 9. A three-month-old baby was reportedly shot point blank along with numerous other children. The baby’s condition is not known. A…

In social media, some of us are discussing the possibility of a false flag operation, coinciding with the United Nations Small Arms Treaty’s scheduled signing by our current regime, on July 27. That U.S. sovereignty violating treaty will then be brought to the United States Senate, where it appears extraordinarily unlikely to be approved by a 2/3 majority. Something really strange would have to happen for enough senators to approve such a treaty of treason-by-increment.

Something strange happened last night and it is not wrong to be suspicious. It is not odd. It is not paranoid. It is not “tin foil hat.” Actually, in world history, the staging of violent events to gain popular favor is classic “old hat.” The timing of this shooting is especially concerning, considering evidence indicates that the Fast and Furious scandal, which implicates Barack Obama’s Department of Justice in consequential murders, is a current example of false flag ops, intended to foment sentiments for gun control among our Citizenry.

It is not strange to have the same concerns about Sgt. Bales in the Afghanistan shootings, Jerod Loughner in the Tuscon shooting, nor of the underwear bomber, nor of Sirhan Sirhan, nor Lee Harvey Oswald, etc. It is normal. It is proper. It is duly diligent. It is being responsible.

More facts surrounding this incident will come out, some may be covered up by God knows who, and more scrutiny must be paid, bringing sound epistemological and forensic discipline to bear.

More will be shown soon in Gulag Bound about the potentials of mind control and human programming, including techniques of trance-induced programming via hypnosis and the administration of drugs. We have already begun to delve into it.