A group of protesters organized by SEIU and Obama For America showed up in Wisconsin to greet Mitt Romney and Paul Ryan. Breitbart cameras were there.

Paul Ryan at the Register ‘Soapbox’

Mitt Romney was chided by the mainstream media, during his recent stop in Israel to meet with leaders, about comments he made at a private fundraising breakfast, wherein he identified ‘culture’ as the likely source of difference in the level of ‘economic vitality’ between Israel and the Palestinians residing in Gaza.

To no ones surprise, the Palestinians were immediately up in arms, charging him with racism and blaming their misfortunes on their occupation by Israel—with absolutely no consideration for their own folly of warring against the Israeli people with rockets, insurgents, suicide bombers and electing the internationally recognized terrorist group Hamas to a majority in their government.

Unfortunately, history, facts and the conclusions of the Arab Human Development Report of 2002, support Governor Romney’s position, according to Charles Krauthammer in his August 5, 2012 article in Israel Matzav, wherein he describes the report as written by a group of Arab intellectuals, commissioned by the United Nations Development Programme, and financed by the Arab Fund for Economic and Social Development.

Krauthammer stated that the report unambiguously asserted that “culture and values are the soul of development,” citing existing cultural norms … “including traditional Arab culture and values,” as being among the major impediments to Arab economic progress.

The report specifically identifies and deplores rampant corruption, repressive governance and lack of women’s (and human) rights, as major contributors to backwardness in the Arab world.

Specifically, Krauthammer clarified Romney’s point about “culture,” which was to highlight the improbable emergence of Israel from resourceless semi-desert to First World “start-up nation,” a tribute to its freedom and openness, just as free-market Chile stands out from state-dominated Ecuador.

However, the book cited by Romney during his fundraising speech, supporting the idea of culture having a pivotal role in prosperity and growth is “The Wealth and Poverty of Nations,” by former Harvard professor David Landes, which concluded that “if you could learn anything from the economic history of the world it’s this: “Culture makes all the difference,” according to a July 30, 2012 Associated Press article by Kasie Hunt and Karin Laub.

We in the United States of America also have a similar, ‘sub-culture’ that makes regular use of these same asinine tactics–playing the race card and blaming their lack of success on someone else—without consideration for their own role in their misfortune…

As Paul Ryan said on Saturday, during his acceptance speech … ‘America is not just a place–America is the only country in the world that is based on an idea.’ He channeled the United States Declaration of Independence, which sets forth our God-given, not government-given rights, and the primacy of individual liberty.

And Ryan also reiterated that according to our Constitution, America is a place of ‘equal opportunity,’ not ‘equal outcomes.’

So, the table is set for American voters to make [perhaps their last] choice for the future direction of America, either that which was created and fought for by our founders, or the collectivist-socialist model being peddled by Barack Obama and the Democrats.

The election of Romney and Ryan on November 6th will not only propel America toward a necessary return to her roots–but also provide the impetus for ditching the valueless ‘political correctness’ of diplomacy in favor of stark ‘adult conversations’ about the role of ‘culture’ in the growth and prosperity of the Middle East.

The Obama syndicate’s (aka the Obama regime) campaign lies have hit new and previously unprecedented heights…or lows as it were. Delving into uncharted dark and murky waters, one of Obama’s first reelection campaign lies came about in an Obama-Ad that claimed Mitt Romney, while at Bain Capital, was a “corporate raider” and while governor of Massachusetts sent American jobs overseas to India. Both of these claims are false, as reported by the liberal Washington Post who advised in its article “4 Pinocchios for Obama’s newest anti-Romney ad”: “The claim that Romney outsourced jobs as governor is equally overblown. This concerns Romney’s veto of a bill that would have prohibited Massachusetts from contracting with companies that outsourced the state’s work to other countries. Lawmakers were especially concerned about a $160,000-a-month contract with Citigroup to operate a system of electronic food-stamp cards that included a customer phone service center in India.

“Both the liberal editorial page of the Boston Globe and conservative editorial page of the Boston Herald urged Romney to veto the amendment, saying it would cost the state money. Romney agreed, saying the measure did not protect state jobs — the call center might have moved from India to another state — but “had the potential of costing our citizens a lot more money.” The Democratic-dominated Massachusetts legislature did not override his veto, even though it overturned 117 others, suggesting that there was little real support for the measure.

“When the food-stamp contract expired, the Massachusetts Department of Transitional Assistance insisted that those jobs be returned to the United States. But they ended up in a call center based in Utah — just as Romney had predicted.”

Then there is the Obama-Ad “Mitt Romney Killed My Wife ,” in which long-time leftist Democrat operative Joe Soptic actually uses the death of his wife and purports to blame Romney for her demise–essentially calling him a murderer–in order to gain support the Obama campaign. The glaring problem with this Ad is that virtually all of the information contained in it is patently false. Soptic claimed that Romney caused him to lose his job when his company was forced to close under a “Bain Capital” deal. False. Romney had been gone from Bain years before this deal was constructed and had been working full-time on saving the 2002 Olympic Games. Soptic said that it was Romney’s fault that his wife didn’t have health care when she contracted cancer and, subsequently, passed away 5-6 years later. False. Soptic’s wife had health insurance where she worked.

Note: I’d say that I feel sorry for Joe Soptic’s loss but, he’s both lying about virtually everything that happened and then–in true leftist fashion–using his wife’s death to further the Marxist cause. As former Obama Chief is Staff Rahm Emanuel said “Never let a crisis [or in this case a wife’s death] go to waste!” 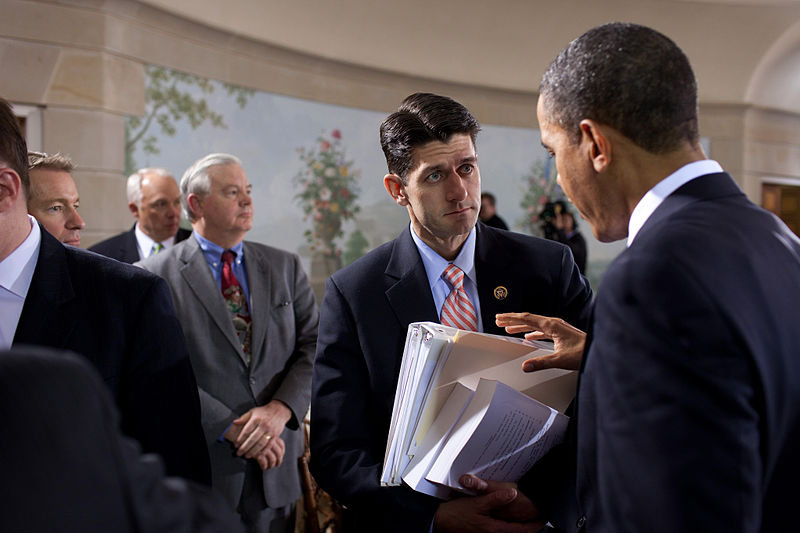 Now that Romney has chosen his running mate Paul Ryan (an extraordinarily fine Congressman and in my opinion an exceptionally good choice) the Obama leftist camp members have been licking their lips and smiling derisively at the prospect of playing their favorite game “More and BIGGER lies to be perpetrated against Paul Ryan about Medicare.” The Left literally hates Representative and now VP candidate Paul Ryan for his astonishing and outstanding intellectual capabilities, his love of God, country and family and his true understanding of our founders’ original intent for the people of the United States of America.

The facts are that Obama has already cut Medicare to fund his ObamaCare monstrosity and Paul Ryan’s Plan is to both stabilize Medicare and increase its funding! As John Nolte at Breitbart writes: “On ABC’s Good Morning America, news reporter Josh Elliot declared Hochul’s win to be “a seismic event in the political world” and a “shocking upset.” Like Curry, he declared: “The GOP candidate lost after backing that Republican plan to cut billions from Medicare.”

“In reality, the Republican budget plan increases Medicare spending from $563 billion to $953 billion ten years from now. That’s an increase of nearly 70%.

This election year, Obama and the Democrats are pulling out all of the stops and without any conscience–whatsoever–are using their most egregious lies and fear-mongering in order to win. They must be stopped on all battle fronts.

Truthfully, Mitt Romney was far from my choice as a presidential candidate. But, his recent choice of Paul Ryan may give me an insight into Governor Romney that I didn’t have before. I am looking for a conservative leader who will work with We-the-People to actually save our country and place us back on the working and winning track that our founders and my ancestors so ably put into place for themselves, their descendants and all of those naturalized citizens who came to our shores wanting liberty and the right to choose their own destinies.

The Lord God has worked with many people–including US presidents–and taken them from obscurity to great leadership positions. Amongst many others, even King David and the Apostle Paul were significantly flawed. All of us are flawed in one way or another.

That being said, the truth is Obama is dismantling and eviscerating our country, while placing We-the-People into bondage. And there is mounting evidence to suggest that his plan (as was and is his friend Bill Ayers’ and ObamaCzar Mark Lloyd’s) may include the killings of millions of Americans are necessary and may begin if Obama is reelected. Ayers suggested the killing millions of Americans who refuse to buy into central government totalitarianism is a necessity and Lloyd said that using the media to perpetrate genocide is a great use of the press. Yes, that’s fear-mongering, folks. But, it is accurate. The truth can be frightening and fear must often exist when fast action is needed. Watch the video sources below. They are bone-chilling and may even wake up a few leftists as to what has already begun under Obama.

Bottom line: under Obama you will likely [or surely] die. The jury is still out on Romney but, I doubt he has a plan even remotely close to the plans Obama has already begun to implement. This is now our last real chance for survival on multiple levels…there will be no more. Which will you choose?

“Woe unto them that call evil good, and good evil; that put darkness for light, and light for darkness; that put bitter for sweet, and sweet for bitter!”
–Isaiah 5:20

Obama cuts Medicare by $700B to fund ObamaCare:
at newsbusters.org

Larry Grathwohl on Ayers’ plan for American re-education camps and the need to kill millions (video):
at youtube.com