Watching the Democrat National Convention, as I had the Republican National Convention the week before, (completely opposite in tone) I felt like I was watching one of those 1980’s Bill & Ted’s Excellent Adventure [just released in Blu—ray perhaps specifically for this occasion]… movies. And when I heard Anderson Cooper say he felt like Debbie Wasserman-Schultz was in an alternative universe it struck me that not only was I watching one, but that is where the Democrat Party had gone and was taking us all to if President Obama is re-elected… to an alternative universe. The next four years would be Bill, Ted, Antonio, Joe, Debbie and Friends taking us all to an Alternative Universe… The Obama Universe from where there would be no return.

The DNC platform, speakers and their points, plus the people behind the scenes pulling the strings are as far left as you can get in American politics and from the response, votes and cheering in the Hall, so are the delegates and much of the Democrat party. Yet America overall, when polled, is still a center right country that believes in God, their religion (primarily Christian), the bill of rights as written, the Constitution as written and value the traditions that have been handed down from our Founding Fathers and generations of average everyday Americans who came before us. Even America’s stand on abortion has shifted right. More Americans now openly say they are pro-life (over 50%) than ever before. Most Americans are against same sex marriage but agree on some type of civil union giving gays the legal rights of married couples and most prefer small government to the vision of Obama and his Chicago crew now in charge. Approximately 43% of Americans consider themselves to be conservatives (this would be even higher and include many more Latinos if it were not for the immigration issue) and only approximately 20% consider themselves liberals. The rest fall into the independent category or the growing category of those who don’t really care about politics, religion or much or anything except their immediate gratification (personally I would put them in the liberal column).

The Democrat party really now represents what only a generation or two ago would have been considered the fringe of American society and their National Convention displayed that. It was overall dismal and disheartening. In fact, the attacks… the extreme focal issues… and the media bias for and by the Democrat party and their speakers were so overwhelming that even some lefties finally spoke out against it. Jon Stewart ran more than one satirical clip on his show focusing on the hypocrisy of the Democrat National Convention. And one of the most covered examples was the discourse between and comments by Anderson Cooper from CNN and the DNC Chair, Debbie Wasserman Schultz, known for her lies and smears, over the issue of the DNC removing God and the support for Israel along with the designation for Jerusalem as their official capital from the DNC platform plus promoting abortion at any stage and for any reason. Cooper declared that Wasserman-Schultz was clearly in an alternative universe. Yet the liberal media overall derided the Republican platform as extreme for standing up for Life, the Constitution and against the using of International, especially Sharia, Law in our courts. But when the group that is supposed to be the watchdog of government misses the spoof on themselves when the real watchdog group Media Research Center handed out ‘Journalists for Obama’ t-shirts, that were gobbled up by media and visitors to their booth at the DNC convention, there isn’t much more to say. Leftist media Obamaworship is alive and well.

When you cannot ‘honestly’ get a 2/3 vote to reinsert the word God (let alone having delegates booing God) into the Democrat Platform or to re-designate Jerusalem as the official capital of Israel, our strongest ally in the Middle East (said to have been removed in this year’s platform in order for the party to align themselves with the President’s beliefs) as well as two other important provisions about Israel that ‘have not’ been reinstated, and your delegates are seen on film booing God, you know you are looking at a party that has left the founding principles of our nation in the dust bin.

And the Dems have no problem throwing their own own under the bus… Although the outcome of the amended vote was predetermined because it had become a liability, this incident may have ended ultra-liberal Mayor Villaraigosa’s presidential aspirations.

The DNC was a cross between a love-in and a party for the faithful laced with smears, untruths and lies as their drug of choice, that left the Kool-Aid drinkers and media gushing but everyone else flat or angry. Their favorite convention favor was the t-shirt that was supposed to be a joke. And they highlighted Jimmy Carter, the worst president in US history until Obama, Ted Kennedy whose career was marred by the death (murder) of Mary Jo Koepeckne and Ted’s own poor judgment (at best), impeached womanizing President Bill Clinton who essentially dislikes Obama, and VP Joe Biden who kept saying fact-check me and when they did, he got all Pinocchios, like for his tall tale about Obama’s mother. I kept waiting for them to parade out John Edwards, but swift-boated Jon Kerry, who is the richest man ever to run for president (since George Washington) and only paid 12% in taxes and little to charity was disappointing enough.

Over the past year the Dems had tried to create the notion of a (fake) war on women by conservatives which the RNC, if watched, completely negated. But there is a real war on women… WoW by the left which includes their support of gendercide, Sharia Law,and creating dependent women, not to mention the sexism of guys like Democrat leaders Ted Kennedy and Bill Clinton: 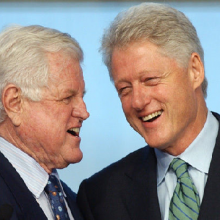 Bill Clinton spoke at the Democratic National Convention to save Barack Obama’s failed presidency. But did he instead remind the American people that he mistreated women — from an intern who was the same age of his daughter to his wife who had to grin and bear his infidelity in public? Clinton had sex with an impressionable and vulnerable young woman who was serving as a White House intern. He abused his authority in the same way some teachers abuse their authority by having sex with their students. Then there were the charges of rape by Juanita Broaddrick:

“Michael Isikoff’s book, Uncovering Clinton, and Christopher Hitchens’ book, No One Left to Lie To, argued that Broaddrick’s claim is credible and shows similarities to Paula Jones’ later allegation of sexual harassment. Washington Post columnist Richard Cohen commented, ‘And yet, I cannot get [Broaddrick’s] accusation out of my head. On television, and in interviews with newspaper reporters, Broaddrick appeared credible.’”

Then there’s Democrat Ted Kennedy of Chappaquiddick infamy. The Democrats played a video tribute to the womanizer at the Convention, putting aside his war on women actions. Former Kennedy speechwriter and campaign operative Bob Shrum said in an interview that “over a long period of time” Kennedy was a “a liberal lion, entirely principled” who “could actually get things done.”

A “long period of time” is right. The Chappaquiddick story is so well known that the words “Ted Kennedy” and “Chappaquiddick” are inseparably linked for all time. But there are many people who don’t know the story.

Kennedy was most likely driving under the influence on the evening of July 18, 1969, when he drove his car off Dike Bridge and into Poucha Pond, leaving Mary Jo Kopechne, a young campaign worker, to drown. To add to the tragedy, Kennedy left the scene of the accident and did not report it to the police until 9:45 the next morning. Kennedy hoped to contrive a story that would put Kopechne in the driver’s seat and absolve him of criminal neglect for driving too fast for conditions and under the influence.

Fortunately, no one would go along with this particular lie, although there was still a massive cover-up by the Kennedy political machine to protect the powerful Senator and their own dependent jobs. The Kennedy operatives whisked the other “Boiler Room girls” — who had been with Kennedy and Kopechne at the Lawrence Cottage, where the party was held — off the island and removed any evidence that the senator had been drinking. In addition, the fact of Kennedy’s expired driver’s license disappeared from the Massachusetts motor vehicle office.

Chuck Moss, a journalist for the Detroit News, gets it right in his review of Leo Damore’s Senatorial Privilege: The Chappaquiddick Cover-Up book “reveals the arrogance, the power and the corruption that permitted him to simply walk away into the future, where he can address a nationally televised Democratic convention [in 1988] — on the subject of public morals.”[1]

Let’s not forget John Edwards’s affairs when he was running for the Democrat nomination for president. The media kept the information under wraps like they did for John and Robert Kennedy.

So the next time some Democrat brings up the war on women narrative, just say Kennedy, Clinton, Edwards. Say it over and over again until they start stuttering, go silent, or walk away.

The choice between Barack Obama and Mitt Romney on November 6th could not be clearer. But with the make-up of our county and the issues of national debt and joblessness, even for the those who lean left, the question has to be why is the polling so close? And if it isn’t accurate what will the the voting process and vote counting be like… ? For those of us who believe that the Obama administration has already taken us much further into that alternative universe known as Obamaland this is the the real problem we face. And no matter how many re-counts, new elections or judicial reviews it takes to get it right before calling (or conceding) an election or seating a candidate (President or downline), we must stand our ground. Voter fraud, manipulation and inaccuracies in the vote counting is perhaps the biggest challenge for Election 2012; that and the awareness (or lack of) of the average voter.