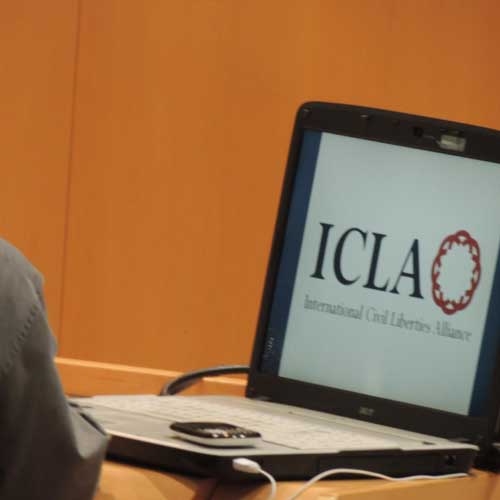 On behalf of of International Civil Liberties Alliance, I would like to ask the following question:

How can the Office for Democratic Institutions and Human Rights appropriately help the Participating States to make sure that their legislation concerning freedom of religion and belief is in compliance with the commitments of the OSCE and other international standards.

It is in the nature of OSCE and ODIHR to assist, advise, educate and remind Participating States democratic rules and compliance with human rights. OSCE and ODIHR can at present help in the prevention of serious political and societal drifts that have multiplied in our societies over the past few years. The concept of Human Rights, which is the fundamental basis of the observance of freedom of religion and belief, has been constantly distorted and deprived of sense by many international participants, some of them acting from within the OSCE.

Since the Organization of Islamic Cooperation created the Declaration of Human Rights in Islam, commonly known as the Cairo Declaration, we have witnessed a distortion of the concepts of human rights and religious freedom. This declaration has created a new and secondary standard in human rights based on Sharia Law, which is entirely incompatible with OSCE’s human rights standards, inspired as they were by the declaration of 1948.

Sharia law is a system of religious and political regulations destructive of all the principles promoted through the OSCE, i.e. Democracy, Human Rights, Freedom of religion and belief etc… Sharia Law has been defined by the European Court of Human Rights on February 2003, as “incompatible with democratic principles…”

Therefore, OSCE’s commitments and works done by its various departments are devoid of sense if all the partners, state-members, NGOs or other contributors are not using the same definition of Human Rights. A definition is required that clearly rejects any interpretation originating in the Cairo Declaration.

The ODIHR could therefore greatly help participating States ensure that their legislation concerning freedom of religion and belief is and remains in compliance with their commitments by: